What should you dress your baby in for their first Halloween? I have some classic Baby Halloween Costumes available for you to choose from from Candy Corn through to Ghosts.

There are some great baby costume ideas for Halloween, but what about Halloween inspired baby costumes? Costumes such as Candy Corn look so cute on babies that they really do look totally irresistable.

What does Halloween mean to you? I always think of witches and pumpkins when I think of Halloween which is why they would be the first couple of costumes I'd think of for baby's first Halloween - what about you?

Let's take a look at some of these Halloween costume ideas and see which one you like best....

Now I must be honest I've never really 'got' candy corn, but it does scream Halloween to me!   It was actually first invented in the 1880s and trick or treat bags would be lost without this confectionery.

Traditional candy corn was made to replicate the colors of a corn kernal and like the baby Halloween costume above it is yellow on the bottom, orange in the middle and white on the top.

The making of Jack O'Lanterns have been part of Halloween celebrations for centuries and is believed to have evolved from an Irish myth about a man called Stingy Jack.

Apparently Stingy Jack invited the Devil to have a drink with him and after playing several tricks on him wasn't allowed into heaven or hell when he died.   Instead he was given a piece of burning coal to light his way.   Jack popped the piece of coal into a carved out turnip and has been roaming the earth ever since.

The Irish then started carving scary faces into their turnips or potatoes and left them in the window to scare Stingy Jack (who was not called Jack of the Lantern) away.   As the Irish emigrated to America they discovered the native pumpkin and started to make Jack O'Lanterns out of them.

Find out more about the Irish myth of Stingy Jack at The History of the Jack O'Lantern.

It's hardly surprising that with the popularity of pumpkin carving at Halloween that a classic baby costume should be a pumpkin baby bunting costume - it also looks so cute!

Witches are always flying on their broomsticks on Halloween...........or in my mind they are anyway!   Both of these baby witch costumes look so cute, that I really can't decide which one I prefer, can you help me decide which of them is best?

Which Baby Witch Costume Do You Prefer?

Originally Ghouls were thought to be an evil monsters who dwelt in burial grounds ready to lure unsuspecting people to their death, somewhere along the way they have been reincarnated as evil spirits who rob graves and prey on human corpses.

Whichever definition you follow one thing is for sure as Halloween approaches and the undead walk the earth the ghouls will be out in force including this cute little baby ghoul!

This baby ghoul with it's black costume accented by a skull is hard to be scared of as it looks so cute, but one thing is for sure this baby ghoul costume does say Halloween loud and clear!

Ghosts were the original Halloween spirits and they weren't like Casper the Friendly Ghost or this cute baby ghost.   The original ghosts of Halloween were Celtic ones who were seen as evil and dangerous, they were spirits of people who had died violently and unwillingly and came back to haunt the person who had caused their death.

Luckily these days we can see cute ghosts on Halloween with the help of some of the gorgeous ghost costumes available including the baby ghost costume above.

Spiders are a classic Halloween symbol and this baby spider costume will make a lovely statement for baby's first Halloween.   Spiders are believed to be filled with mystical energy because of the fact that they have eight legs and their ability to weave webs.   Witches welcome spiders into their home hoping to harness some of their energy which is probably why they have become associated with Halloween.

Of course some species of spiders look pretty scary as well and spiderwebs hanging down make such cool Halloween decor that it just works!

This baby spider costume is anything but scary, however and is a really cute looking Halloween costume to dress your child in.

Which Halloween Baby Costume Do You Prefer?

Halloween Costumes for Everyone
Everyone loves to dress up for Halloween from the youngest baby to great grandparents so here's some great fancy dress ideas for everyone in the family.
Updated: 09/22/2012, lou16
Thank you! Would you like to post a comment now?
1

I love the candy corn costume. Definitely my favorite on the page.

We all think our baby's are pretty special, now we can show everyone that the...

Baby bunting costumes are a great way to dress up the youngest member of the ... 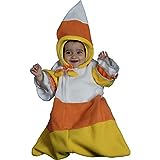 We all think our baby's are pretty special, now we can show everyone that they really are Super Babies with these Superhero Baby Costumes!
15%  0   2 lou16
Halloween Costumes for Babies