What brings us to the world of story and imagination? Can we find what we seek? Can we find our Happy Ever After? Our permanent happy ending.

Shall we go on an adventure? Let's explore the world of virtual object permanence.

Are we creatures of imagination, always driven by the unreal rather than the real? Creatures of emotion and feeling rather than fact dealing machines. Advertisers and monetizers always aim for our hearts to hit our hips.

I will probably answer none of these questions, but let's have a chat anyhow about the permanence of our need for the imaginative and how in trying to understand it and make money from it, that the fairy tale becomes an infomercial and dies in our arms.

I like to use Runescape as my exemplar for all things MMO and marketing. It's not the best known game but it has plenty of history and variety. And they are doing amazing things with their virtual world. I find it amazing that virtual worlds can burn.

Let's begin shall we?

Bring me my slippers.

What's the difference between the real world and virtual worlds?

Virtual worlds have fewer rules, they are easier to understand.  For certain inputs you get certain outputs.  They are reliable.  They don't let you down.  If you work you get rewarded.

These things don't always happen in the real world.  People lie,  or as House says, everybody lies.  But in the virtual world the quest giver will give you your reward, the auction house won't rip you off, the game world will do as you expect it to.

But also the virtual world doesn't judge you.  You are safe behind an avatar who is handsome or beautiful, usually with too many muscles and missing some clothing, but that's a small price to pay.

All of these ideas are worth investigating, but I want to chase down the idea of permanence in virtual worlds.  That what we do there matters and is remembered.

Let me slip these ruby slippers on and we can wish ourselves into a virtual world.

If you have played an MMO you will have noticed a few things which congregate under the heading of permanence.

High scores.  What you do there, rings throughout eternity.

Memorials to players or game designers.  A permanent reminder of how temporary we are.

Items that do not degrade with use.  Magical things which need no constant care.

Obsession with rules.  The rules that define the virtual and permanent world also keep it safe and must be enforced at all costs or the centre cannot hold!

These are some of the things we might think of as permanent, even knowing that no such permanent thing exists, but let's go with the flow.

Let's turn the regard of our visage toward Runescape.

Runescape is run by Jagex Ltd and owned by Insight Venture Partners, a banking mob out of New York.

There has been a new emphasis on monetization of MMOs lately, been a bit of a fad.

In order to do that you have to make the virtual world small enough for an MBA to understand.

One of the effects of this is that we lose the sense of permanence, everything has to be constantly worked at and constantly maintained.  It's makework for the imagination.  Which doesn't work.

For Runescape that included something called Prestige.  Basically you got to redo all your past work.  Constantly.  But you did get a few emotes and maybe a bauble or two as a reward.

Surprisingly Jagex allowed a player vote on this content and it got downvoted heavily.

Players want to keep their page in the book of their imagination.  Not have Jagex constantly sending them back to page 1.

It's recycling.  Everybody loves recycling!  I can see an excited marketer shouting that at a Monday monetization meeting.

I find it all rather boring really.  And I'm not the smartest cookie in the shed, so I think it would turn off other lights of the imagination.

Jagex's failed combat upgrade was also unsuccessful for Star Wars Galaxies.  Change is permanent but not all change is necessary or beneficial.

But let's look at something rather more interesting and more to do with players.

Players die in real life.  As do game developers.  In Ultima Online they have a few little places put aside to commemorate, to remember.

Older players of Runescape will no doubt remember a few players that have passed away.  The Old Nite is a more commonly remembered player, but there have been many others.

We feel a need to remember.

Runescape will probably never have anything to commemorate dead people.  But they used to have something that was an almost permanent reminder of those who had played before.

Jagex changed that.  Now if you don't pay membership, you are purged from the high scores.

It must save Jagex money some how.

And it gives people less reason to ever return.

Runescape has a long history of constant updates.

A rolling tumbleweed of change, it hasn't stopped.

But is new stuff change?

And when is change, not really change?

What Jagex did recently was to change the interface.  This included how players performed in combat with EoC, basically more key pressing for the same result, but quicker.  And a whole bunch of changes to how players could set up their screens.

In essence Jagex charged players more time to play Runescape.  Players had to spend more time and pay more attention in order to do what they had done before.

I'll skip how Jagex also charged more to play Runescape via microtransactions, we are all familiar with how they increase the cost of a game if you want all the content.

If you charge people more, you get fewer people.

That's a permanent part of economics.

If Jagex wants more players, give players a sense of that unreal permanence again.

Deconstruct a JMod
It's critically important to understand how to talk to customers. Sometimes it doesn't quite work.
Updated: 01/08/2014, Fargy
Thank you! Would you like to post a comment now?
2 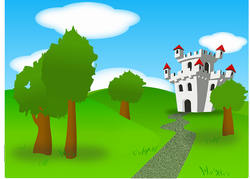