J.K. Rowling clearly loves candy, because she had a lot of fun imagining magic candy for her Harry Potter world. I've gathered them here for you, including muggle alternatives.

Everybody loves sweets. Harry Potter sweets make a great addition to any Harry Potter party, or as an in between fun surprise for Harry Potter fans of any age.

Magical candy in Harry Potter's world does things like jump in your stomach, burn a hole in your tongue, taste like blood (for vampires of course) and turn you into a canary.

Such sweets may not be approved by our government, but they'd sure be a lot of fun - especially if we had magic around to fix whatever went wrong.

Here's a list of magical candy you can get an aproximation of at home, for a birthday party or as a trick or treat handout at Halloween.

Chocolate frogs are of course alive in Harry Potter's world, though as Ronald Weasley says on train ride to school in the first movie 'they've only got one good jump in them'.

Chocolate frogs are for sale in shops, but it's way better to make them yourself, using one of those candy molds.

Licorice is the Dutch treat par excelance. Could not avoid saying that. That said: licorice wands are merely licorice sticks of course, especially since they can't really do magic, even in Harry Potter's world.

You can make your own 'pepermint toads' by making chocolate frogs (using that same mould), using green food coloring to make them toads (on white chocolate) and pepermint oil or ground pepermints to give it that pepermint flavor.

This is the kind of magical candy available for muggles.

As you can see: quite a limited selection. Don't you wish you went to Hogwarts yourself?

These are really jelly beans of course, and in tribute to the movies, they make them in collections with a larger variety of tastes than ever.

Dumbledore is aparently into sweets, lemon tasting ones especially.

Nothing magical about it, you say? Well... according to J.K. Rowling it can heal you from the depression caused by a dementor. And let's face it, haven't we all felt cheered by chocolate from time to time?

Acid Pops that will burn a hole right through your tongue

Even in Harry Potter's world you'd have to go straight to madam pomphrey to get help with this kind of candy.

Cockroach Clusters with real cockroaches in them

Probably the worst candy to come out of J.K. Rowling's brain. Where does she come up with it?

Probably inspired by the sense of filled bon-bons exploding in your mouth.

Pepper Imps: tiny black candy that makes you "Breathe fire for your friends!"

A great way to get Hagrid on your side.

Obviously this is only bad if you get a bogey flavored one or something, like Fred did.

Harry Potter Candy Store
The genius of J.K. Rowling hasn't just created a great fantasy series, or a spin off movie set, but also... an intriguing new collection of sweets.

Severus Snape Halloween costume and wig
Get dressed up as Professor Snape for Halloween or a Harry Potter and the Deathly Hallows Movie party.

Great idea for an article and a new excuse for me to eat chocolate - 'but I must have chocolate because a dementor made me feel depressed....' - not sure if it will work, but I will try it out.

Delicious, one of these days I am going to make chocolate frogs. Meanwhile, I'll have to settle for Bertie Bott's Every Flavour Beans. 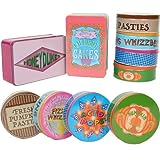