Synopsis: Charged with the task of helping an escapee get back to London and facing tough odds because of Gestapo interference, Hogan (Bob Crane) comes up with an idea that is so wacky, it might actually work. He and his crew construct a hot air balloon so they can smuggle the escapee out of camp through the air. All he needs to do is convince Col. Klink (Werner Klemperer) to give him the resources to do it.

Didn't Quite Live Up to Its Potential

Since they stopped airing reruns of “Star Trek the Next Generation” when I’m home at lunch, I’ve been watching this show a bit more often than I had in the past. And, when home for lunch today, I had a chance to see this particular episode.

Overall, this episode is pretty much as funny as I expected it to be and is pretty decent, especially when compared to some I’ve watched recently that just seemed to go through the motions. Seeing Hogan pull off the escape by convincing Klink to let the prisoners hold a basket weaving contest and build tents was pretty entertaining and I loved how they set up the distraction by using a kite they had been flying earlier.

That being said, I think the episode could have been better had the writers chosen to keep Hogan’s plan a secret up until the point they inflated the balloon. This is a complaint I’ve had with other episodes from this series because some of Hogan’s plans would be considerably more entertaining had the writers kept the cat in the bag until the very end. And, in this particular case, I do think it would have kept people scratching their heads about what exactly Hogan’s plan was considering things like baskets, tents and kites don’t normally seem like they would go together.

It also would have prevented having to fill in a couple minutes by creating artificial suspense as the balloon inflated. While probably a bit realistic, that part did seem to be somewhat awkward after the first minute or so.

This is a funny episode that I think is one of the better ones from the series. However, as I mentioned, had the writers kept Hogan’s plan a secret until the very end, I do think the episode would have been considerably better and might even have been the best ever.

StevenHelmer, Thank you for product lines, pretty pictures and practical information.
The escape attempt makes me think of Colonel Dramesi's book about escaping from a Vietnamese prison. He and a friend managed to escape. But they stood out in the countryside so they were recaptured. I suppose any escapee in the above-mentioned situation would have greater chances of making it perhaps all the way across Europe and the Channel to London.

Were any of the heroes punished when the Nazi command noticed one person less in the prison line-up? 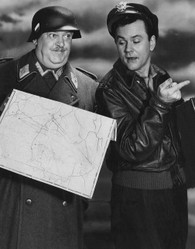