Horse Head Mask: The Most Fashionable Animal Hat Around

You can split your generations into two by mentioning a horse head.

Those above a certain age will immediately think of a certain scene in the movie 'The Godfather'. The rest will have something much more humorous in mind.

Since 2007, the horse head mask has been appearing all over the internet. Hilarity isn't far behind. Now you can own a little piece of meme magic and become the horse head too.

Just think of the possibilities...

Grab Your Own Horse Head Mask!

Unless you've been living under a bail of hay for five years, you must have encountered the horse head. Now you can get your own mask.

It's latex.  It looks realistic.  You see through eye-holes craftily hidden inside the mouth.  What more is there to know?!

This is one of those must have accessories, which works even when those around you aren't aware of the internet meme.  Simply put, the horse head mask just looks disturbing amusing freaking hilarious!

But on the off-chance that you really don't know your meme.  Here are the highlights.

The resident of Arlington, Virginia, took credit for being the man in the mask. He posted his proof on Reddit.

On October 29th 2012, as Hurricane Sandy lashed the American east coast, most people were hunkering down indoors.

But not Jimmy Kruyne.  He judged that he still had time for his afternoon jog, before the super-storm touched down.  Being an athlete of impeccable taste, he picked his outfit with care.  Swimming trunks, running shoes and, of course, a horse head mask.

Startled reporters were paused in the act of their serious business by his little run by.  Suddenly there was laughter, not 'Frankenstorm', for this Halloween hurricane.

Yet it wasn't quite 'stir craziness' as the reporter concluded.

Jimmy had already been out to walk his dogs and he'd seen the news crew there.  The knowledge brought about a certain premonition. Or, as he revealed his thoughts on Reddit later on,  "Self, you're going to be on TV today."

Unfortunately, he didn't realize that he was being filmed until it was too late.  Beneath the mask, his glasses were steaming up.  His nonchalant jog was stopped by a moment of spectacle wiping and mask adjustment before, so he thought, he trotted into view.

Ready to go now, he didn't suss that he'd been on camera all along, until he dashed home and rewound his DVR to watch the relevant footage.

The stunt naturally left JImmy with some regrets, "I should have never taken the mask off. I broke the illusion."

This viral internet image was captured on Google Streetview. Scotland's own horse head guy watching the car go by!

When Dobbin Horsome saw the Google street car approaching, he immediately did the decent thing.

After all, he'd just returned from a wedding in Aberdeen and he had the horse head mask in his bag.  This was an image which the internet needed!

You could see it for yourself, in Crathie Gardens East, but Google have now blurred out Horse Boy's face on long shots.  The relevant standing to attention image has gone entirely in the live version.

Horse Head Masks - Variations on a Theme of Meme

You don't have to get the equine mask that everyone else gets. You could strike out on your own with black, white or unicorn.

Wotaken is a Japanese performance artist. What can I say? The mushrooms look very tasty and nicely cooked. (You will never be able to unsee this.)

Let me just give you a moment to collect your thoughts and ponder upon what you've just seen, before I answer your probable questions.

And yes!  I can divine precisely what the first one will be!

The mushroom depicted is fly agaric (aka fly amanita).  Believe it or not, it's got hallucinogenic properties and will cause those consuming it to do trippy things.  I know!  Incomprehensible in the circumstances.  Who would have thought it?

The dancing chef is Wotaken, a Nude Camp performance artist from Japan.  He does this a lot.

What do you mean, they weren't your first questions?!

Tom Green didn't start the horse head meme, but he certainly popularized it in this memorable dance routine from 2007.

While Count Smokula and the Radioactive Chicken Heads played, Green pranced about, shaking his head and screaming a lot.  A million horse head masks were bought a day later.

Their popularity has barely abated ever since, with an appearance in the middle of Hurricane Sandy now propelling ownership of the mask to epic proportions.

So where will you be wearing yours?

Got the Mask? Then Buy the T-Shirt!

It's art, apparently. In Japan.

The mushroom guy is genuinely creepy...

I thought it was the Mushroom Guy too, but it turns out that Tom Green precedes him.

Yes, I laughed for ages after I realized the Hurricane Horse Man was from Reddit. :)

I loved his reddit post on that, because the image initially turned up on reddit a few days before his own post. What's best about it is that he had the horse head on hand to be able to even do that XD

I think it originally became a meme because of the mushroom guy. I remember the first time I saw that too! LOL

Moose Hat Or Moose Slippers - Which Is Manlier? 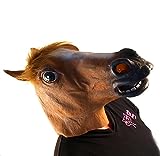 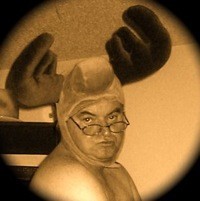 Moose Hat Or Moose Slippers - Which Is Manlier?

Women love men with crazy moose hats or fuzzy moose slippers. Find out why, where to get the manliest antler hats, and how it all started with Adam and Eve...
91%  6   14 JoHarrington
Halloween Costumes for Adults

So many masks to choose from, but which is the absolute number one mask for Halloween in each horror genre? I've taken to the stores to find out.
Loading ...
Error!