How proud should the God Zeus and Pierre de Coubertin be?

The Sochi Winter Olympics was the UK's most successful Olympics ever. London 2012 was even better, with the UK winning 65 medals.

The modern Olympic Games have been running now for 118 years, since Pierre de Coubertin persuaded an international conference on sport that they were worth re-instating. From 280 athletes when the games resumed in 1896, to over 10,500 in 2012, the event is now televised world- wide. Originally starting in Ancient Greece, as part of a religious festival to praise the God Zeus, the Olympics have come a very long way. Good reason for de Coubertin to be proud.

A bit of history

The UK has had its most successful winter Olympics ever at Sochi in 2014, winning 4 medals (ok, not many, but we don’t get that much snow).  London 2012 was even better, with GB and Northern Ireland achieving a total of 65 medals and the nation really getting behind the event, watching the Torch Relay live as well as the actual sporting events.

The Olympic Games has come to be seen as one of, if not the, world’s most popular sporting event.  Even some of those who are not really interested in sport get excited about it.

Believed to have started in 776 BC, the Olympic Games were held in honour of the god Zeus, as part of a religious festival.  They were held every four years, at Olympia, when people from all over Greece attended to watch.   But the games were banned by Roman Emperor Theodosius 1 in 394 AD, when he was trying to impose Christianity as the state religion on the Roman Empire.

With the advent of the Renaissance in Europe, all things Ancient Greek became of interest, and some European nations started holding events called Olympic Games, however, it wasn’t until 1894, when a conference on international sport was held in Paris that Pierre de Coubertin proposed reviving the Olympics.  His proposals were accepted and plans to re-start the games were put in place, the International Olympic Committee (IOC) was formed, and, after 1,500 years, the Olympic Games re-started in Athens on 6 April 1896.

280 athletes, 13 countries and 43 events.  Wrestling, cycling, weight lifting, shooting, fencing and tennis, to name a few.  All competitors were men, with a few being tourists who had just happened to find the games and were allowed to compete!  The US won nine out of the twelve events it entered.  This Olympic Games included a marathon – it followed the same route that had been taken by a Greek soldier in 490 BC to inform the government of the victory over the Persians.  The soldier ran from Marathon to Athens, a 25 mile journey.  (The Marathon is now a standardised 26 miles, 385 yards.)

De Coubertin was made head of the IOC.  He had the somewhat unenviable task of taking the games forward at a time when the Olympics was not so favoured and there were a number of world fairs being held that were far more popular.  Still, he continued, and in 1924, Paris held the first really successful modern games.  With 44 nations, over 3000 athletes, including women this time, participating and a winter Olympics too, for the first time, de Coubertin’s dream was coming true.

De Coubertin retired in 1925, leaving a legacy that sees the Olympics as the most famous sporting competition – in 2012, over 10,500 athletes from more than 200 countries participated.  Not only that, we now have Paralympics games – in 2012, there were more than 4,300 athletes from 164 countries.   Archery, equestrian, table tennis.  Even wheelchair rugby and football.

That looks and feels like something to be very proud of to me.

Telesto, Thank you for the background to the Olympic Games start-up 122 years ago! Do you prefer summer or winter games? I wonder if the marathon would have been as popular if it had been named something like the Pheidippid, after the runner instead of the victory? 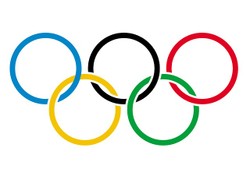