The history of a gifted artist, known for her sketches, drawings and paintings - Maria Innocentia Hummel which inspired artists at Goebel Company.

The Life Of Maria Innocentia Hummel

Berta Hummel was borne in Bavaria in 1909. At 18th her father helped her to enroll in Munich at the Munich Academy of Applied Arts from which she graduated after 4 years. She was a shinny student appreciated by teachers and peers for her talent of drawing.

She and her family were deeply religious, as student she chose to live in a boarding house run by  an order of the church. This is where she met 2 nuns of the Franciscan order from the  Convent of Siessen located near the Black Forest in Wurttemberg.

The Convent was a teaching order with great emphasis on the arts.
In 1931 after her graduation she decided to enroll in that Convent where she took the name of Sister Maria Innocentia.

The order was a poor one in those days but she wanted to help raise some money for the Convent, so she received permission to exhibit and sell her art: drawings, paintings, postcards.

The most wanted pieces of art was her postcards with children figures.

Young and ambitious Franz Goebel, the 4th generation owner and head of W. Goebel Porzellanfabrik, was on a mission to create a new line of figurines.

But he had no inspiration from the start and he persistently looked for ideas.

Some day he discovered Maria Innocentia's postcards and he was fascinated by her drawings.
He was convinced that those two-dimension drawings can be transformed in three-dimension bas-relief figurines.

He discussed and convinced his master sculptors  at Goebel first and then... he met with the Mother Superior and with Sister Maria Innocentia Hummel.

It was a crucial moment for both Franz Goebel and Sister Maria Innocentia.

The Production of Figurines

In 1935 at the Leipzig Fair which was a major International show, the first figurines were advertized and they had a tremendous success that has been their ever since.

Franz Goebel was right, his great instinct as a business man served him well.

It was remarkable that Sister Maria Innocentia herself spent a lot of time at the factory, working with Goebel's artists to ensure that the transition from paper drawings to ceramic bas-relief was done properly. It was a team work, numerous times Goebel's Artists went to Convent to show the products. 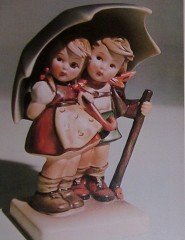 In this post I want to stay only with Hummel Figurines, as they are the most wanted and admired products created by
W. Goebel Porzellanfabrik.

Group - Ring Around The Rosie

She suffered of tuberculosis, a disease which was a scourge of her times; it has been misdiagnosed and poorely treated.

Her talent lived forever in the shining ceramic bas-reliefs created by W. Goebel.

The name of this figurine is "The Doctor".

Do you collect Hummel Goebel Figurines?

Very interesting history behind these little figurines. Makes me want to investigate the Lladros I collect. Thank you!

There are a lot of collectors in USA. The fact that we was at the launch in1935 at the Leipzig Fair, was a start of a frenetic business development and create a great business relationship with Goebel which was both ways profitable.

Interesting to see that these little Hummel figurines have pass the test of time and were not just a collector's fad. I don't collect them, but I did once find one of these at a gaeage sale for dirt cheap and sold it on Ebay. Apparently I made a collector happy :)

Yes, they are lovely indeed.
Thanks for reading my post

How can I say no? These are more: I WANT! Thanks for all the lovely photos

My mother had a small collection and "book worm girl" is my favorite. I have it somewhere and can't wait to unpack and find her. I never knew how the Hummels came to be. I'm sorry to read that you lost your whole collection.

You are right... especially knowing that we lost her at 37... we know how unique and precious the bas-reliefs really are.
Thanks for reading my post.

Thanks for telling us the story of Sister Maria Innocentia. I grew up seeing them, too. Knowing the story makes me appreciate them even more.

Nancy, I am glad you collect them, the originals are very rare and precious now.
I had a collection, and in the last period of John illness, when he was terminal ill, for one year and 7 month I didn't work, as my presence to support, and take care of him was requested... In that period I sold on eBay my entire collection, it broke my heart but I had to do it!
All pieces was originals, as we was 2-3 years members of the Goebel club... this is how I learn about the tragic life of Maria Innocentia.
Thanks for visiting my post about Goebel figurines

Barbara, you are right, the plates started in 1971 when was the commemoration of 100 years of Goebel business.
I am glad you like it!

The second post which shows more about the relationship between Sister Maria ... 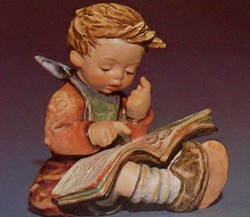 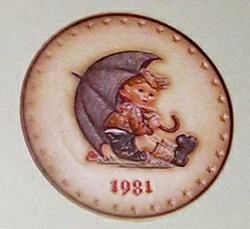 The second post which shows more about the relationship between Sister Maria Innocentia Hummel and Franz Goebel, and other forms of art in addition to the figurines.
100%  18   17 onepagearticles
How to Draw