The Hungaroring in Budapest will host round ten of the 2013 Formula One racing season on Sunday 28 July 2013.

Pirelli has reverted to its 2012 tyre design for the Hungarian Grand Prix in Budapest on Sunday 28 July 2013 as it tries to put an end to the problems that have plagued it all season. On the racing front, Sebastian Vettel is building up a commanding lead in the drivers and constructors championships after his win last time out in Germany.

The latest round in the tyre fiasco that has dominated this year’s Formula One racing season will be unveiled at the Hungary Grand Prix in Budapest on Sunday 28 July 2013 with much-hated Pirelli going back to last year’s tyre (with a few tweaks) as it bids to find a product fit for purpose. Even so, it has backed down on its original compound choice of hard for the soft after pressure from some of the teams. Rumours are gaining strength though that Pirelli has had enough of Formula One after making a mess of it so far this year and that Bridgestone and Michelin are both readying themselves if given the call to return to the sport for next year.

Meanwhile, early reports on the new tyre, which was used by teams taking part in the young drivers test at Silverstone, look promising. Pirelli has also said that tyre data from the test will be shared with Mercedes, which didn’t take part in the test following the tyregate row.

As to racing, Red Bull’s Sebastian Vettel extended his lead at the drivers championship after winning last time out in Germany ahead of the Lotus pair of Kimi Räikkönen and Romain Grosjean, neither of whom are certain of racing for Lotus next year. Räikkönen is hotly tipped to move to Red Bull to replace Mark Webber and Lotus is known to be disappointed with Grosjean’s performance this season, even though his good race in Germany will have helped his mission to keep his seat.

Fernando Alonso lost ground in his bid for the championship after only managing fourth in his Ferrari. Lewis Hamilton failed to convert his pole position into anything better than fifth, and he only managed that after passing McLaren’s Jenson Button late on. McLaren though were glad to be back in the points with both drivers in the top ten.

The Hungaroring is all about corners with no really long straights. The start-finish straight is the longest and ends in a sharp bend, which is the best if not the only real overtaking opportunity apart from when a driver makes a mistake, which is quite common here given the amount of concentration needed. DRS and kers will also help with overtaking. The track is very bumpy, making it a test of endurance for the drivers. And the forecast is that it will be hot to add to the problems.

Following Cosworth’s decision to leave Formula One, the Marussia team has announced that next year it will be using Ferrari engines. Marussia’s head technician Pat Symonds is leaving the team to join Williams as chief technical officer to replace Mike Coughlin.

Austria could be back on the grand prix circuit from next year if regulatory approvals are given. It last hosted a race in 2003 at what was then called the A1-Ring and is now known as the Red Bull Ring. 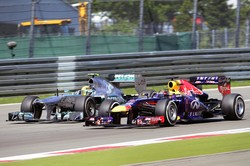