Hutt River Province has had a strange history beginning in 1970. The twists used in an attempt to break with Australia were ingenious.

The story of Australia’s Hutt River Province is interesting, and has had numerous twists since its origin in 1970. I first became aware of the Principality of Hutt River, initially called Hutt River Province, when I researched coins from the region. A plethora of Hutt River coins were appearing for sale, and I wanted to determine if my small online coin site should handle them.

The Origins of Hutt River Province

Now the Principality of Hutt River

In 1970, after a feud with the Australian government after the government imposed a quota on wheat led Leonard Casley to declare independence from Australia.  He had, it might appear, a good reason since the quota was declared after he had grown a crop but before it could be harvested.   If he declared independence he would not be subject to the quota imposed by Australia.

The Governor-General of Australia, Sir Paul Hasluck, wrote an opinion that it was unconstitutional to act against Casley, and in a letter addressed Casley as Administrator of the Hutt River Province.  Casley began using the title Prince, and claimed protection citing the Treason Act of 1495, which would make anyone acting against his independent state guilty of treason.  The basis was that the Administrator was acting for the Queen.

The Birth of a Principality

The Treason Act of 1495 was issued after Parliament was able to address the issue, and was a result of Henry VII backdating his reign to one day before defeating Richard III and executing those who fought with Richard, the rightful king, for treason.  The reasoning was they had fought against him during his reign.

One way Australia responded was to withhold mail service to Hutt River Province.  It was too little of a response and had less effect than desired.  Hutt River mail simply went through Canada.  In 1978 Prince Leonard declared war on Australia, then issued a cessation of hostilities letter just days later.  He then used the Geneva Convention to support his independence since he claimed to be a country not defeated in a war.  In 1980 a court in Perth Australia ruled both currency and postage stamps of the Principality of Hutt River are legal within its borders.

Others tried to duplicate Prince Leonard’s success, but the Australian government quickly closed the loopholes used by Leonard Casley.  As is often the case, the person who finds the loophole gets through it, then it goes away.  And, I doubt others were as well versed in legal matters.

The Coins and Paper Currency

The Principality of Hutt River now enjoys new sources of income.  Hutt River coins are minted on the behalf of the government, and sold well above face value as commemorative coins.  Subjects are plentiful and include wars, movie stars, and even kangaroos.  Some are made of precious metal, but many are base metal.

At one time there was a court case in the United States over Hutt River coins being sold on television.  Are they real coins?  One story is that Hutt River’s authority to mint money is not internationally recognized, so they were declared counterfeit.  Another way this story goes, and is the more recent version, is someone was counterfeiting Hutt River coins, and Prince Leonard did not stop them promptly.

I found the facts above in Wikipedia, but believe them to all be within the sum of what one might consider well known facts.

This article contains links to affiliate programs from Amazon, Viglink, and Ebay through Viglink, and Adsense advertising.  These must use cookies to allow for proper crediting.

I am going in hospital for operation my right hand in 2 day time so I won't be able to contribute much to anything or write anything in the immediate future as I will have stitches in for 14 days. But I would love this article to develop further. It is really very interesting.

I don't have much expertise in that area of history. My historical knowledge has focused on religious history, though not exclusively.

Perhaps someone in England could follow up with an article on the Treason Act of 1495, and the events leading up to its passage. Richard III and Henry VII are beyond my scope of knowledge, but would be of interest to read.

Thanks, and yes I had no plans to write this until I realized it might be of interest. Your article allowed me to make a general statement, but the whole of the piece is too lengthy to add as a comment. There is a doubt that this will persist after Leonard Casley dies, and I have no idea how he claims the title.

Veronica, you talk of articles developing into future articles. This is what we were taught to do in our journalism course, take an idea that inspires you and develop it further. Doing this on Wizzley enables links to be traced through articles.

Fascinating and very informative. I had no idea about any of this.

I feel truly humbled that this excellent piece developed from a discussion on my 12 days of Christmas article . I love to see how all our articles develop into further articles through rational and respectful discussion and debate.

I believe Australia does not consider him significant, but Putin would never tolerate him. The problem was there were about 1000 others who would have chipped away at Australia, so the plugged the hole.
Did he properly use the Treason Act of 1495? Or was he grasping at straws?

As the whole secessionist state is 18500 acres, which is just under 29 square miles the place is hardly likely to undermine the territorial integrity of Australia.

However, if he were in Russia, what do you think Vladimir Putin would do? Invite him for tea, maybe, but he would have sent a column of tanks to fetch him.

He is now treated as a foreigner for tax purposes, and there is a small tax for Hutt River Province. So, he has avoided taxes since 1970. He does claim support for the Queen, so his dispute is only with Australia. After 45 years it looks like he got away with it.

Does Prince Leonard try to enforce his authority, or is all this a stunt?

There was a similar situation in 1978 when a bookseller,Richard Booth, in Western England declared himself king of the town of Hay on Wye. No one bothered,life went on as normal, then in 2009 other booksellers deposed him and declared a commonwealth. No one has been executed so far! 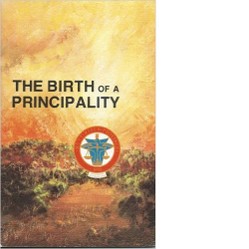