Halloween can be a fun time for children, but typical activities take place at night outdoors. Illuminated costumes allow for the fun while adding a margin of safety.

Safety is a primary consideration as children dart about on their trick or treat movements. They can be into a street before being noticed. And, when one person is responsible for keeping tabs on several children all at once that person cannot be looking in every direction. So, it is up to the adult to make the child visible before starting out.

When I was a child we carried flashlights and had lights in our pumpkins. This was the best option available, but the lights were all directional. We were much less visible from behind, and even from the sides. Only our constant movement redirected the flashlights in multiple directions. But were we really safe? Perhaps we survived because automobiles were scarce, so when we did something reckless there was no encounter with a motor vehicle.

The introductory image is allowed by the affiliate program.

Accessories Can Be Laid Down

The situation today is that there are far more vehicles on the streets than there were in the fifties.  And if we try the flashlight technique the children can easily set them down.  Children will free their hands for other things, like checking through their candy bags.

You could place reflective tape on the costumes children will be wearing.  But why go to that much trouble?  LED lights require very little power, so batteries can be used to operate a string of LED lights.  Costume makers have realized that there is a market for safety through lighting, so lights either are placed to outline parts of a costume or hidden beneath a shear layer of material.  The lack of heat allows modern LED lights to be used without the fear of a costume bursting into flames.  And to really catch the attention of motorists some costumes utilize blinking lights as attention grabbers.

Light up Halloween costumes do not cost an outrageous amount, many are quite reasonably prices.  And, they still look like the character they represent.

Superhero costumes can be found with the feature that they light up.  Of course not every costume lights up, so care in choosing what costume a child will wear is important.

Superhero costumes come in a large variety, so finding the child’s favorite character should be possible.  Shown below are some of the popular characters, but there is limited space available here to show the full range.

Superhero costumes are often thick and opaque, so using lights to make outlines is the preferred technique.

Princess costumes that light up and that even twinkle can be found.  Here a thin layer of material can be overlaid so the lights are covered.  The lights are between layers of material, quite literally.

A dark outfit with a stick figure can have quite an impact in the dark.  The costume works well in a darkened room with a party or as an outdoor costume on a dark night.  It has a certain impact that can really get attention.

Other costumes that light up are also available.  Darth Vader is among the Star Wars characters that are available.  The Sesame Street Elmo character is another possibility.  Of course there are others, but these are well recognized characters.

There is a nice selection at Wholesale Halloween Costumes,as well as nice light up accessories.

Many people take a dog along when they go out to trick or treat.  I see many dogs pass on Halloween night.  Some of these dogs are in costume.  So, can the pet wear a lighted costume?  Yes, there is a pet version.

Pets can move as far as the leash allows, and if that is into the street the pet needs to be made visible.  So, make the entire family safe on Halloween with LED lights, including the family pet.

I accidentally found one when I did costumes for boys so I research what else us available.

This is a great idea, to have illuminated costumes at Halloween, and I like your selection.

And just looking the costumes are not being changed that much in appearance. There are actually two witch costumes ff you count the one the dog is wearing.

That little rainbow witch is just too cute for words. But the light up stick figure is the one I would really like to see in real life. Great that lights can now be built in. 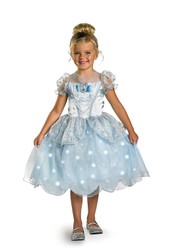