In The Flesh is a zombie drama with a difference, and due to start on BBC Three on Sunday 17 March 2013.

What happens in the aftermath of a zombie infestation? That problem is tackled in In The Flesh, a three-part drama from the BBC that looks and the reintegration of zombies back into society. Luke Newberry stars as PDS (partially deceased syndrome) sufferer Kieren Walker and Emily Bevan as fellow zombie Amy Dyer.

Luke Newberry and Emily Bevan in In The Flesh

While most zombie programmes concentrate on armies of flesh eating dead people and the resultant butchering of them, In the Flesh, a new three-part drama from the BBC, looks at the difficulties in integrating the zombies back into society. Set four years after the type of zombie infestation that viewers are more familiar with, In The Flesh – due to start on BBC Three on Sunday 17 March 2013 – deals with the problems of what to do with the zombies when the danger is over.

In a typical modernist way, the authorities now refer to the zombies as sufferers of PDS (partially deceased syndrome) and the focus is on teenager Kieren Walker (played by Luke Newberry) who is trying to rejoin his family and the community in which they live.

But not all of society is ready for such a move and Kieran has to come to terms with dealing with a community that rejected him and his own haunting memories of what he did during that period. On top of that is the fascist-like Human Volunteer Force, a militant organisation opposed to what they call the “rotters”.

Helping him is fellow PDS sufferer Amy Dyer (played by Emily Bevan), also from the same village of Roatron. Amy brings back horrible memories for Kieren from the time they hunted together but she also becomes his best friend in a hostile world.

Actors in In The Flesh

Luke Newberry’s first recurring role was as Lighthouse in the TV series My Dad’s the Prime Minister. He was also Teddy Lupin in the 2011 film Harry Potter and the Deathly Hollow: Part Two. Other film roles have included Tom in It’s Better Now, Vasily Lukitch in Anna Karenina and Simon in Quartet. He is also playing Harry Dunn in the ITV ghost series Lightfields.

“It’s a very human story about overcoming obstacles that you don’t think you can overcome, and facing reality, and learning to live through traumatic events,” said Newberry.

This is Emily Bevan’s first recurring role after a number of one-off parts in the likes of Comedy Lab, PhoneShop and The Thick of It. She also played an inspector in the 2007 film St Trinians.

Team behind In The Flesh

Made by BBC Drama Production North, In The Flesh was created and written by Dominic Mitchell. Jonny Campbell was the director, Ann Harrison-Baxter the producer and Hilary Martin the executive producer.

I can't tell you how impressed I was by it. Even a couple of months later, I'm still thinking about it, which doesn't happen often with a television show.

Hi Jo, yes I really enjoyed it. It is hard to find anything truly original in the zombie genre, but this managed it.

Did you watch this by the way? I was absolutely rapt. It smashed all expectations. The best I've ever seen in the zombie genre.

This sounds like 'Being Human' for zombies. Just my sort of thing then! Thanks for the heads up. I'll watch this. 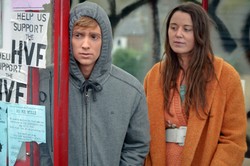