Increasing incidents of stray dog bites and rabies are scaring people in India but help is remote.

Due to impractical laws in force, the municipality and police force say that they cannot take any responsibility for the stray animals that are roaming free on the streets. The problem magnifies in early mornings and late nights when there are few people around. The stray dogs come out in gangs and attack lone riders who are working late, pedestrians and motor riders are potentially at risk.

The status of law is pathetic and so is the condition of dogs. Many of the dogs who roam on the busy avenues of urban India survive on garbage. Their condition is pitiable, they are often infested with skin diseases and even more serious and deadly disease like rabies.

India leads in many issues that are serious and grave. No country in the world has as many stray dogs as India and there are 3 millions of people contacting rabies which is growing by the day. By the end of century the census reports India will lead in human population as well. India also leads in diabetes and many other diseases which are not so good.

There isn’t any country in the world that suffers from hundreds of millions of free roaming dogs that bite millions of people. The frequent victims of such attacks are small children, old people and motor bikers. According to The Times of India Feb 2014 edition, an estimated 20,000 people die from rabies infection every year which is more than one third of the global rabies toll.

Bunch of stray dogs hide in public parks, street corners, blind alleys and passageways. They bark and howl at night making it difficult for people to sleep peacefully. Morning joggers carry bamboo sticks and bicyclists are at their mercy. You never know when a gang of dogs will assault you. Small kids have a lot to fear to. They are easy targets. People walking their pets are prone to dog’s attacks as the street dogs become aggressive while defending their habitat boundaries. There are many incidents of pet dogs being killed mercilessly by big and hostile street dogs as well.

High Court of Delhi in 2011 passed an order asking the police to provide protection to dogs and dog feeders and has made it a punishable offence in case anyone restricts, prohibits or causes inconvenience to any person feeding a street dog or resorts to removal dislocation or killing of a dog.

The impractical law has contributed to the problem and has its own share of exploding population of stray dogs in India.

The animal cruelty act in 2001 forbade killing of dogs and the number of dogs have increased so much that the country has a problem increasing at an alarming rate. Animal activists and fanatics make it difficult to modify the law in any way making it impossible to cater to people demands of protection. Politicians are equally responsible as they have passed the law without thinking the side effects and the counter views of public opinions

The litter and garbage are thrown anywhere and cleaning mechanisms are not in place. Garbage treatment is not done and short cut methods of dumping it in open places and at outskirts are not in any way going to stop dogs from inhabiting such places. The discarded food in garbage attracts dogs from villages, outskirts and the cities are flocked with strays. In absence of fines, people throw anything anywhere with no respect to the environment.

Victims of dog bites are often poor people and tiny tots. The poor often land in city’s public hospitals which have inadequate medical supplies. Small kids are soft targets for big dogs; they are often mauled in parks when a parent or guardian leaves them off guard.

How to tackle the problem of stray dogs in your opinion?

Some Thoughts on Controlling Dog Menace

Since littering causes big crowd of dogs pulled in the city, there has to be stringent measures to stop people littering the streets. Hefty fines and punishments need to be introduced.

Animal act has to be refined to cater to the menacing situation. Animal activists and politicians make it tough to alter any existing laws. Common sense should prevail while making such laws, counter views should be considered and the opinions of victims of dog bites should be mulled over.

I would like an amicable solution to the menace. However; keeping the problem unchecked and ignored is increasing

Be Humane to Dogs

The heat generated by rural traffic brings animal sentients such as cats, deer, dogs, opossums, raccoons, skunks and squirrels to roads that intersect or overlap with traditional animal-crossing routes. It generally does not harm drivers, their passengers or their vehicles here even as it does leave dead animal sentients.

Have the stray dogs attempted to cross city streets there? That would seem dangerously deadly for them and for drivers, their passengers and their vehicles and for pedestrians.

That must be terrifying. With a problem that large, there doesn't seem to be any one solution - trap, neuter, and release takes time, and releasing aggressive dogs just because they're neutered doesn't help anyone. If animals are a danger they need to be controlled. (I grew up in farming country. Vicious dogs didn't last long.)

Oh how awful! I can understand how scary that must be for people.

I am quite scared of the stray dogs, especially when we go for walks. They seem to be harmless, but we can't be sure on that. I just hope there will be a solution to the problem, with out killing them.

Animal rights activists take a very rosy, unrealistic view of animals, and while they have a valid case against animal cruelty, some animals are a danger, and the principle of self-defence gives us a right to kill them if necessary.

When I lived in Ireland years ago a pack of feral dogs killed eight of our sheep on the college farm, so the farmers banded together to hunt them down. They surrounded them on a nearby mountain and shot the lot. Harsh, but necessary. [I was not involved in the hunt.] Kill some animals to protect others, including ourselves.

That is truly terrifying. Rabies is such a scary disease. Here if here is a report of a rabid wild animal, dozens of trained men are sent to look for it. I don't know what the solution for India is.

As much as I like dogs, this situation appears to be unacceptable and out of control. People should not be in danger from packs of wild animals. Rabies is a very serious disease. Pinned to my Dogs and Puppies board.

This sounds terrifying. People should realize that dogs are wolves so they will hunt like wolves, in packs, seeking vulnerable victims.

There is another problem. Feral animals [domestic gone wild] revert to nature in a few generations. Take an example. In Britain we have the Swona herd, a herd of cattle left on the island of Swona when the people left in 1944. They have since then gone wild. The biggest and most aggressive males keep the females to themselves and are passing on aggressive genes to their offfspring. The isle is still deserted, but people are advised not to go near them, though the cattle are checked by a vet yearly. The vet has to be very careful with the big males. This sort of reversion may be happening with India's dogs.

The Amazon River wild life consists of many endangered species that can only ... 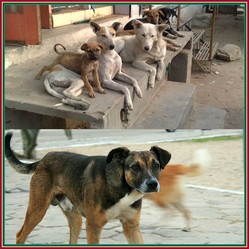 Why are elephant’s endangered species?It is because we are destroying green cover, their habitats with rapid urbanization and industrialization and poaching being another menace.
36%  3   4 WriterArtist
River Conservation The Amazon River wild life consists of many endangered species that can only thrive in conditions that are suitable only in the river. There are threats to this mighty river.
Loading ...
Error!