Issue 252 of science-fiction and fantasy magazine Interzone (number 252, TTA Press, ISSN 0264-3596) contains a mixed bunch of fiction with “Sleepers” standing out as the best. I also really liked the quirky and short “Two Truths and a Lie”. “Diving into the Wreck” is worth reading for the ending and “The Mortuaries” is particularly inventive.

So, as you sit down to read, prepare for a journey that will let you dodge bubbles, visit the dead (twice, possibly three times), find a lost relic on the Moon and play a silly guessing game.

“The Posset Pot” by Neil Williamson

Bubbles from a parallel universe are breaking through and causing havoc – the usual kind, death, destruction, apocalypse. Jim is trying to survive in Glasgow with his new friend Ettrick when he finds an old pot that came through one of the bubbles. Intriguing, the story weaves a mystery, posing unanswered questions and telling a sad tale of forlorn hope. It also provides a teaser to the writer’s skills for those tempted by his first novel, reviewed later in the magazine.

“The Mortuaries” by Katherine EK Duckett

Brixton’s and Morton’s mortuaries towered side by side, and though Tem often visited Brixton’s to see the dead in scenes fitting their lives, the adults would not let him enter Morton’s. This is a world in crisis and through the ways they treat their dead we get a glimpse into what went wrong. A depressing but absorbing tale, wonderfully written, and kicked off by a fine illustration from Warwick Fraser-Coombe.

“Diving into the Wreck” by Val Nolan

Someone has at last found the wreck of the Eagle module on the Moon’s surface, and Arthur is determined to salvage it, and he is taking his best friend with him. But the ghost of Lena haunts them both, his best friend’s wife who would have disapproved of this mission. A well-painted picture of a future world, and one graced with a rather surprising ending.

“Two Truths and a Lie” by Oliver Buckram

This very short, short story consists of small incidents in the lives of a couple, from their meeting to departure, each ending with three statements of which two are true and one is false. Can you guess which? Cute and fun.

“A Brief Light” by Claire Humphrey

Lauren and Richard have a ghost, but by now most people have at least one as well, and more keep coming back. This story is pleasant enough and well written, but doesn’t really go anywhere. It is odd though, and that’s good.

The unnamed narrator is outside the hospital, taking a smoking break from watching her father die, when a white blur steaks past her; that was the first time she saw a sleeper. This is a depressing and engrossing story of a woman living with impending grief and hoping that unknown phenomena might provide her with relief, or at least answers.

There is much to ponder in this month’s editorial, which questions the wisdom of including in the Hugo Award nominees one Theodore Beale, also known as Vox Day who is noted for some extreme right-wing writing, and has even bragged about encouraging tactical voting to get more right-wingers onto the Hugo lists. This is timely especially given a brief note near the end of the column about Interzone’s own readers awards in which it says a number of votes were disqualified due to “suspicious voting patterns”.

After Dave Langford’s usual light relief, the issue moves onto to the results of the awards where we learn that it was actually seven votes that provoked the disqualification. Apparently, there was suspicion that a writer might have been getting his or her friends to vote. I won’t spoil the suspense by revealing the winners here.

As mentioned, the book section starts with an interview with Neil Williamson and a review of his debut novel The Moon King. Interesting is the role Interzone played in his development. Out of the rest of the book reviews, I’ll probably read Descent by Ken MacLeod at some point and The Three by Sarah Lotz sounds intriguing, but I was particularly attracted to the last of the reviews – We Three Kids by Margo Lanagan, a novelette for which I will keep my eyes open. Sadly, none of the DVD reviews have me rushing to my favourite online store. In the new films section, I’ll probably wait for Captain America: The Winter Soldier to come on telly but I may be tempted to pay to see Under the Skin.

SteveRogerson, Thank you for product lines, pretty pictures and practical information.
In particular, Diving into the Wreck, Posset Pot and Sleepers get my attention.

Would the posset pot happen to have something potable in it? 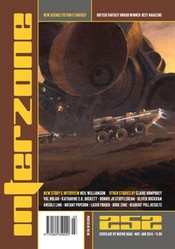 The May 2014 issue of KZine, a collection of stories for Kindle readers, contains a mix of science-fiction, fantasy and crime.
55%  1   8 SteveRogerson
Esoteric Magazines