Steve Rogerson looks at the fiction in the July-August 2014 issue of science-fiction and fantasy magazine Interzone.

Issue 253 of science-fiction and fantasy magazine Interzone (number 253, TTA Press, ISSN 0264-3596) has a certain sadness to the collection of stories. James van Pelt deals with Alzheimer’s and the effects on a relative, Caren Gussof has a man displaced but still with a daughter to look after, DJ Cockburn on a man who was someone and has lost it all, E Catherine Tobler takes us into a woman’s memories. Neil Williamson’s “The Golden Nose” stands out for its uniqueness, but my favourite is “Flytrap” by Andrew Hook – it even had me browsing a plant shop looking for a Venus flytrap.

“My Father and the Martian Moon Maids” by James van Pelt

Despite its fun title, this is a depressing story of a boy growing up as his mother dies and his father develops Alzheimer’s. Science fiction was part of his life as a child, but though this story is good, is it really science fiction? Well, maybe.

Lovely dark illustration by Daniel Bristow-Bailey, and a fascinating story, or rather three stories in one. There’s Adamson, who dreams of other worlds. Gareth studies carnivorous plants. And Beth loves The Body Snatcher, the Jack Finney novel that spawned four movies. There is a trap awaiting them all.

“The Golden Nose” by Neil Williamson

This is such a dark tale, one about smell and a man’s obsession to achieve perfection, something with which an artefact might help. But the Golden Nose came at a price, a personal price. Would it ruin him or make him? If ever a story deserved to be smelt as well as read, this is it.

“Beside the Dammed River” by DJ Cockburn

When the truck carrying the extremely valuable chunk of a recovered asteroid breaks down in a remote part of Thailand, Angela (she keeps her family name secret) has to turn to an old man for help. But he is more than he seems. This is a fascinating story of class and respect, and how both can shine despite circumstances.

Sadly, no picture with this, which seems to be common in Interzone for the James White Award winner, almost as if they are treating it as something less than the other fiction in the issue. Almost disrespectful, which is ironic given the subject matter in this case.

A woman stands on the surface of Mars reminiscing. What’s true and what isn’t is lost in the language. It is vague, deliberately so, but I found it dull as well. Just not my kind of story.

“The Bars of Orion” by Caren Gussof

Blankenship and his 13-year-old daughter lost everything when their universe was destroyed and now they are in a different one trying to fit in while a psychiatrist attempts to figure him out. She thinks he was beaten, mugged and left on a street corner and the other universe is a metaphor for life before the incident. Either way, this is a gripping story of a man trying to cope, to focus on what needs to be done.

David Langford’s amusing Ansible Link is followed by a whole page of obituaries, possibly the most famous of which is Alien artist HR Giger. Also included is former Interzone book reviewer Ken Brown, who died aged only 57.

The book review section starts off with Robot Uprisings, a collection of short stories about, well, robots, and includes an interview with co-editor John Joseph Adams. Koko Takes a Holiday by Kieran Shea looks the most interesting of the rest of the reviews.

Tony Lee’s DVD reviews kick off with the good news that there is a new version of If.... available with lots of extras. They actually showed this at the all-boys grammar school I attended in the early 1970s, but sadly it did not inspire a similar revolution. The release of Under the Skin also caught my eye and there is a competition to win the Blu-ray release.

And finally Nick Lowe’s look at the latest films. Yet another Godzilla release? Oh dear! As well as Mutant Popcorn, Nick Lowe also had the job of penning the editorial, in which we discover that SF theatre is alive and leg breaking.

SteveRogerson, Thank you for product lines, pretty pictures and practical information.
Flytrap particularly interests me. I like it when animals and plants can be integrated positively into a crime, fantasy, horror, science fiction magazine. Stephen Hawking said in his last book, Brief Answers, that it will be on our consciences if there's a final, last extinction of our sentient animals.

Was the Venus flytrap plant in the shop what you expected from having read the namesake story? 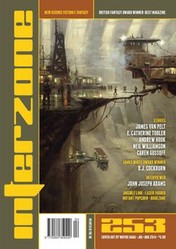 The story of a woman who accidentally becomes a fairy and would rather she wasn't.
61%  2   8 SteveRogerson
Esoteric Magazines