The Formula One racing teams head for Monza and the Italian Grand Prix on Sunday 8 September 2013.

Can anyone stop Sebastian Vettel holding onto his world title? After a fine victory in Belgium, Vettel now holds a 46-point lead in the Formula One world championship as the teams prepare for round twelve, the Italian Grand Prix in Monza on Sunday 8 September 2013. This is one of the fastest and most exciting circuits in the calendar.

Sebastian Vettel holds a commanding 46-point lead ahead of the Italian Grand Prix in Monza on Sunday 8 September 2013. Vettel had a comfortable win last time out in Belgium, but Ferrari’s Fernando Alonso finished second, elevating him to second place in the championship and keeping his hopes alive.

But with Vettel winning five of the eleven grands prix so far and with Red Bull’s talent for finishing strong, it would be a brave person who would bet against him adding another title.

A third and fourth place, respectively, in Spa from the Mercedes pair of Lewis Hamilton and Nico Rosberg leaves them 77 points behind Red Bull in the constructors championship. It also means Hamilton still has a sniff of the drivers championship as he moves up to third place, just ahead of Lotus driver Kimi Räikkönen, the only other driver with any realistic hopes of winning the title this year. Räikkönen failed to finish in Belgium.

Mark Webber, in his final season for Red Bull, continued to disappoint with a fifth place and it shows how far McLaren have fallen this season in that Jenson Button was pleased with his sixth place. McLaren are just happy that they are now ahead of Force India in the table. Monza will mark the team’s fiftieth anniversary in motor racing; they probably hoped to be in better shape for such a birthday.

This is one of the fastest circuits and there is a good overtaking opportunity at the end of the start-finish straight. The car set-up is different to other races. Low downforce helps make the most of the long straights but that can cause problems when the cars come into the chicanes. The early laps too put a test on the brakes as the cars have to be slowed down very quickly while carrying a full load of fuel.

The circuit also wears tyres down quickly, and so Pirelli have opted for – as they did at Spa – their two hardest compounds – the hard and medium.

Lewis Hamilton won this race last year. This track was also where Sebastian Vettel had his first ever grand prix win, in 2008 with Toro Rosso.

It didn't happen quite as quickly as predicted here (I said two weeks ago that the announcement would be made during the Belgian Grand Prix weekend), but Daniel Ricciardo has now been confirmed as Mark Webber's replacement at Red Bull for next season.

David Ward has resigned as director general of the FIA Foundation charity so he can stand in December’s election for FIA president. Current president Jean Todt, who has held the post since 2009, has not announced yet whether he is to re-stand.

Michelin are ready to replace Pirelli as the official tyre supplier, according to inside rumours. Pirelli have come under fire from teams, drivers and fans this season for the poor quality of their tyres and many will be happy to see the back of them. 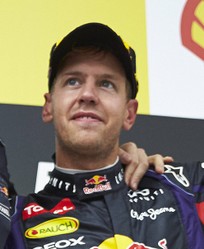