History repeats. We all know that. But ITV's 'Whitechapel' takes that a step further, when infamous crimes resurface in the modern day.

For the majority of people, Whitechapel is synonymous with Jack the Ripper. Since 1888, this real life serial killer has passed into the stuff of nightmares and legend.

Ripperologists write their books; London tour guides lead parties around the haunts; and the silver screen tells the stories.

The question lingers: would modern policing have caught the Ripper? ITV's 'Whitechapel' finds out.

Criminal history is safe, because it happened so long ago. But what if that horror refuses to remain historical? 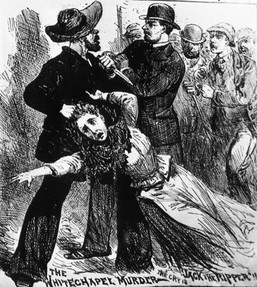 Ancient crimes can be as fleetingly frightening as a scene from a Hollywood movie. They don't seem real, when the distance of time is between us.

There are no photographs, nor news reels, to make this seem immediate. The artist sketches look like a gallery from a grotesque comic book.

It is alright to pore over these tales, titillating that inner notion of humanity as the hunter. It's neither sadism nor a sign of personal psychopathy. It's history and a study of society. Reduced to little more than entertainment through its lack of relevance to our reality; like a horror film or a ghost story.

Amongst the fascination, there is a feeling of safety. The aspects of the victims, witnesses and police officers alike are foreign. Their clothes belong to another world, thus we are cushioned from it. Moreover, we retain that knowledge that nothing like this could happen now, could it?

This is the whole premise of the ITV drama Whitechapel; and it's not just Jack the Ripper returning to stalk 21st century streets.

Poll: Have you been watching Whitechapel?

What Happens When the Ripper Returns?

Watch Season One on Amazon, or buy the DVD, in order to find out.

Jack the Ripper's Resurrection on the Modern Streets of Whitechapel

The 19th century police never caught their most notorious serial killer. Will their counterparts today do any better? 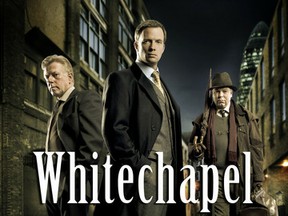 Rupert Penry-Jones, Phil Davies and Steve Pemberton star in this ITV police drama. Whitechapel is filmed in the same infamous London borough, where the original Jack the Ripper stalked his victims.

DI Joseph Chandler wasn't entirely welcome, when he was fast-tracked into leading Whitechapel's CID unit. No-one's under any illusion. He's in it for the promotion.

Highly educated and well-spoken, Chandler's posh mannerisms didn't quite fit into the gritty, working-class ethos of the rest of the division.

But the rest of the squad, led by gruff DS Ray Miles, had more important things to worry about at that very moment in time. A woman had been horrifically murdered on their streets. In fact, as the case unfolds, it's all looking very much like a repeat of 1888.

With history playing out before their eyes, the police officers are forced to listen to a man who knows a lot about the original crime scenes. Ripperologist Edward Buchan is viewed with disdain by the majority of the police force. He writes books about Jack the Ripper and takes tourists around to the real life locations on a daily basis.

Right now, his 120 year old knowledge is looking very up-to-date. Using a mixture of modern forensics and the history books, the team seek to catch the copy-cat.

The Kray Twins are Back!

Not British? Then be the first to see the second season by importing it in Region 2 format

Could the Kray Twins Return to London's East End?

They were Britain's answer to the Mafia and each served life without parole in prison for their crimes. The sigh of relief was premature.

The Whitechapel series isn't merely an excuse to use copy-cat crime ad nauseam. That's fun, but it would quickly lose its realism, if that was the case. Not to mention the fact that it would be very bad luck for the borough involved!

When the second series was announced, I think most people groaned a little. The first had been so good, that repeating it could only dilute the concept. No area would attract so many psychotic historians. The fact that they had one was incredible enough.

Ben Court and Christine Ip didn't do that to their viewers. Every story has a different twist and another way to utilize the lessons of the past, in the investigations of the present.

Jack the Ripper wasn't Whitechapel's only world-famous criminal. During the swinging Sixties, the Kray Twins reigned supreme from neighboring Bethnal Green. But their street ran straight through the border and some of their crimes were committed in those pubs.

Styled after the Mafia, Ronnie and Reggie Kray were eventually caught and locked away. They both died behind bars, after each spending over thirty years there. Hence it's a little perturbing for Chandler et al to discover that another set of Kray twins are terrifying local residents into silence.

There are no hidden dimensions here. Jimmy and Johnny are quite open about their gangster activities, safe in the knowledge that nothing will stick long enough to warrant their arrest. But Buchan has access to the original Kray police files. Will he find mistakes in history, that can be prised open now?

How much do you know about the Kray Twins?

Buy the biographies before you watch the series. Be prepared with the facts.

British demand has brought it back; and it does not disappoint. The historical precedents are coming thick and fast! 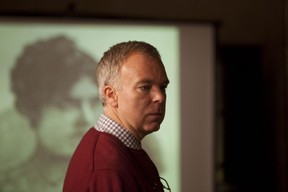 Whitechapel has, at its heart, the premise that history is vitally important.

This might be a crime drama, but the rich seam running through it is that the past is ignored at our peril. Events are never over, when their repercussions are still being felt.

By the third series, the format was extended into six episodes, leading us through three cases. They all interweave old crime files into the here and now. Buchan's archive is as useful as the reports of the bobbies on the beat, though for varying reasons. The cleverness of Whitechapel's writers is in how they contrive to establish these precedents.

The third outing does not focus just on one historical criminal escapade, but on several. As Buchan's expertise grows, he's not even still confined to those notorious events committed in the local area. He's gone global!

Proving that nothing is ever really original, Buchan manages to find clues in his files for just about anything that the CID can throw at him. He's more organized than ever, with sections on his shelves for all manner of murders and all countries too.  When he's not arguing with an historian's zeal, he's cross-referencing America with Japan to bring things right back home to London.

Meanwhile Chandler, Miles and the rest have some of their nastiest crime scenes yet.

Can you match Buchan for knowledge about the history of crime?

Delve deeper into some of the cases touched upon in Whitechapel. When their historian did it, lives were saved!

When you've got the whole range of human history coupled with a show aiming for realism, then it's inevitable that there's going to be some cross-over. With Whitechapel, that's intended. :D

I've never seen Criminal Minds. I'll have to check if we have it in Britain.

I've never even heard of the series, but you brought up an interesting point about fictional shows sometimes being far more based in reality than most realize. I don't know if you've ever heard of it, but I really love the show Criminal Minds. It is true that a lot of times when the show really manages to creep me out, I find solace in the thought that I don't see the events of the show *really* happening in everyday life. Then I saw an episode that was really disturbing, but something rang true about it, and I later realized that almost the exact same thing that happened in the episode really did happen to a little girl about ten years ago, I just happened to catch a documentary-like program about what had happened to her back then. And now the show has a bit of an edge for me, because as these fictional FBI criminal psychologist sit there discussing the inner-working of the minds of some of the most disturbing psychopaths imaginable, I sit there wondering...just how close to reality are we right now in this episode?

My Mum watches Doc Martin and really enjoys it. I've been to St Ives, where it's set, and it's beautiful down there.

I love British TV and movies. I wish we could get them here in the U.S. I discovered Doc Martin on Netflix. Now I'm sad that I can't get the new shows until they're old shows.

I love it. I don't want much television, because I'm partially deaf, so the audio is too much hassle. But this is one that I'll make an exception for. It entertains me, while also pinging against my interests as an historian.

This is really interesting. I don't watch BBC often but this sounds like something I'll look into.

It's poring over, not pouring over, by the way. :) 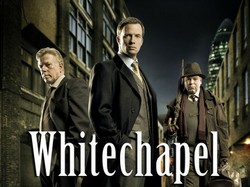