For the second race in a week, the Formula One racing teams head for Suzuka and the Japanese Grand Prix on Sunday 13 October 2013.

Sebastian Vettel could clinch the drivers championship at the Japanese Grand Prix in Suzuka on Sunday 13 October 2013. Meanwhile, the most recent race, in Korea, has again raised questions as to whether Pirelli's tyres are up to the job of Formula One motor racing. This could be crucial, as the Suzuka circuit is known to be hard on tyres.

Sebastian Vettel added his eighth win of the season in Korea and his fourth in a row, which means he could now clinch the drivers championship next time out at the Japanese Grand Prix on Sunday 13 October 2013. To do that, he needs to win and his nearest rival Fernando Alonso to finish worse than eighth. But whether that happens or not, the title is in the bag.

Vettel now has a commanding 77-point lead over Alonso with only five races left. Red Bull also are set to take the constructors championship with a 118 point lead. Even if Vettel partner Mark Webber continues his run of bad luck – his car burst into flames in Korea last time out – Red Bull should have no problem taking the title again.

Though Vettel won comfortably in Korea, there was action further down the field and Lotus looked back in form with Kimi Räikkönen and Romain Grosjean taking second and third place, respectively. A good drive by Nico Hulkenberg in the Sauber saw him rise to fourth, holding off a determined challenge from Mercedes’ Lewis Hamilton.

The question mark over the suitability of Pirelli’s tyres again raised its head when McLaren’s Sergio Perez saw his right front delaminate spectacularly, and all credit to him he managed to nurse the car round almost a full lap to the pits and still finished tenth in the race. Other teams also reported tyres that came dangerously close to disaster. There is no sign though that the FIA is going to reconsider its decision to allow Pirelli to continue to be the sole supplier for next season. One has to ask: Does someone have to die or be seriously injured before the powers that be realise that tyres from this company are not up to the job?

The figure-of-eight circuit at Suzuka puts a lot of pressure on the tyres but less so on the brakes. The barriers are very close to the track so even slight mistakes by the drivers can be punished with a race-ending crash. That said, most of the drivers love it because of its fast corner combinations that are real challenge.

The circuit is built into an amusement park and was originally intended as a Honda test track, for which it is still used. Sebastian Vettel won this race last year. Pirelli’s medium and hard tyres will be available for the race.

Wooing the local crowd, Sauber has promoted Japan’s Kimiya Sato to reserve driver and is likely to give him a run out in one of the practice sessions.

Caterham’s Charles Pic and Marussia’s Jules Bianchi both face ten-place grid penalties at Suzuka for failing to respond to yellow flags in Korea. As both are likely to qualify in the last four, this matters little. 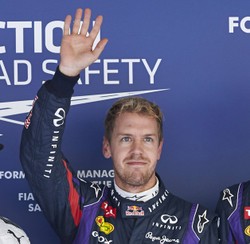