Japanese Stiltgrass is an invasive species of grass that has become widespread across Eastern North America, especially in the southeast. Learn to identify and control this weed.

Japanese stiltgrass, Microstegium vimineum, is an invasive species of grass in North America. Introduced from Asia, it has become widespread across the southeastern U.S. and is spreading.

This annual grass poses a major risk to ecosystems and watersheds because of its shallow, weak root system. The grass shades out other plants, including many native plants that would have deeper roots that better hold the soil. It thus can both reduce biodiversity, and contribute to erosion and soil loss.

Here you will learn a bit about this grass, how to identify it, and how to control it.

This species prefers part shade and likes moist conditions; it is most likely to be found in degraded forest habitats, especially near urban areas.

Japanese stiltgrass is most likely to be found in moist conditions in part shade.  In some circumstances it can tolerate full sun and, medium shade, or slightly dry conditions.

It is most likely to be found in degraded forest habitats, such as forested urban parks, often along paths and roadsides.  It also sometimes shows up in lawns, especially in shady spots.  Heavy deer over-grazing can also contribute to the sorts of environments that favor this plant.

Grass ID is tricky: fortunately, this grass is distinctive looking. Look for a silvery stripe down the center of the leaf, and check for a shallow, weak root system.

An easy characteristic to look for is a silvery stripe down the center of the leaf or blade.  The blades also have a fairly rich lime-green color, more intensely green than many other grasses.

The blade shape and dimensions of this grass are somewhat distinctive and exclude many grasses.  The dimensions tend to be around 1¼-4" long, ¼-½" (6-12 mm.) across.  Relative to most common grasses, the blades are wider relative to their length.

One trick for identification, that I was taught by the staff at the Schuylkill environmental center in Philadelphia, relies on this grass's shallow roots. There are some similar-looking grasses that are native, but they are all deeper-rooted.

If you're not sure if you have identified this species correctly, try grabbing it close to the base, and tugging gently.  If it is indeed Japanese stiltgrass, it will pull right out by the roots with little effort.  You will need to pull much harder to pull out the deeper-rooted native grasses.

Look at more examples of this grass.

Ecological Concerns: Why Is This Plant A Problem?

An invasive species, introduced to North America, shuts out native plants, and the weak root system can contribute to erosion and soil loss.

Japanese stiltgrass, as its name suggests, is an introduced plant, not native to North America.  It is considered an invasive species, and it can damage ecosystems by shutting out native plants.

An additional concern associated with this grass is its weak root system.  Because it is so weak-rooted, it does not hold soil effectively.  As it grows tall and thick, it shuts out and kills many native plants that would naturally have a deeper, more extensive root system.

As this plant spreads, it thus increases the risk of soil loss and erosion during heavy rains and flooding.  As this grass often tends to grow in disturbed habitats and floodplains, the risk of soil erosion in the areas in which it grows can be particularly high.

Closeup of a Whole Stiltgrass Plant

This picture shows a stiltgrass plant I pulled up. Note the extremely small root system relative to the above-ground portion of the plant, and the distinctive, branching growth habit.

How to Control It? Pull by hand, or mow for large areas.

Manual control (hand pulling) is easy and extremely effective for this plant. Carefully-timed mowing can also be effective for large areas.

Japanese stiltgrass is relatively easy to control if you are diligent and dedicate regular time to its removal.  I recommend a two-pronged approach to control: removal and replacement with other species.  Because it spreads so quickly, if you remove it without establishing other species in its place, it will quickly return.

Manual removal: Because it is so weak-rooted, it can quickly and easily be pulled out by hand.  The leaves are smooth and gloves are not necessary.  In many cases, because the stems are strong but the root system is weak, grabbing even the top of the plant lightly is sufficient to completely uproot the plant.  If the stems break off, grab at the bottom and uproot the base of the plant.  Take care to remove all plants if stems break off, so that you do not create natural selection pressure that will make the plant harder to remove later.

Mowing: when this grass invades large areas, carefully-timed mowing can effectively reduce it.  Mow in late summer, before seedheads are formed.  This will kill most of the grass.  Perennial grasses and herbs will be more likely to survive a single mowing like this, and will resprout vigorously the following season, helping to out-compete the stiltgrass.

Seeds can stay viable in the soil for around 3-5 years, so returning repeatedly to cull resprouts will be necessary.  With even a single season of control, however, you will find much less of this plant comes back the following year, because seed production will be greatly diminished and other plants will increase both in seed production and rootstock (for perennials).

What can I replace it with?

There are many native grasses and herbaceous plants that can successfully out-compete this plant.

When removing any invasive plant, it is important to replace it with native plants, or else the invasive can come right back.  There are numerous native grasses, as well as broadleaf herbaceous plants, which can be substituted for stiltgrass, and which can successfully out-compete it once established.

Grasses: An ecologically similar grass which is native, looks somewhat similar, and often can thrive in similar conditions, is Leersia virginica, called "white grass".  Leersia virginica grows best in a rich soil with ample organic material.  A different-looking grass that also prefers similarly moist, partly-shaded conditions is Nimblewill, or Muhlenbergia schreberi; I've found this species to effectively out-compete stiltgrass once it gets established, especially in the slightly gravely soils that it prefers.

In areas with taller growth, I have had good luck replacing stiltgrass with the very different native species Chasmanthium latifolium.  This perennial grass is a little slower to get established, but will eventually grow much taller.  The Elymus genus also contains several species, mostly with a clumping habit, that grow in similar habitat, such as Elymus riparius (Riverbank wild-rye), Elymus hystrix (Bottlebrush grass), and Elymus virginicus (Virginia wild-rye).  These grasses are easy to grow from seed; often, merely scattering the seed in the right habitat is enough to get them established.

There are also many herbaceous broadleaf plants that can grow in similar conditions and out-compete it.

Broadleaf Annuals: Clearweed, Pilea sp., an annual which likes wet areas in part shade.  A taller, somewhat more aggressive plant that has a stronger preference for wet conditions is Jewelweed, Impatiens capensis.  Acalypha (mercury or copperleaf) is another annual plant that can also replace it, liking slightly drier conditions than clearweed.  Acalypha rhomboidea is the most common and vigorous species.

Broadleaf Perennials: Honewort, Cryptotaenia canadensis, is a perennial that often thrives in similar conditions.  A slightly taller-growing native plant, Persicaria virginiana, can establish perennial colonies from underground rhizomes, and also shut out this plant.  Another interesting plant is Boehmeria cylindrica, or false nettle, which resembles stinging nettles but does not have stinging hairs.  Two perennials with showy blossoms in fall, that can outcompete this plant, are blue mist flower, Conoclinium coelestinum, which likes moister conditions, and White snakeroot, Ageratina altissima, which tolerates a wide range of conditions.

I often see these plants growing in similar conditions to stiltgrass, sometimes growing in it and often out-competing it.

These herbaceous plants, native to Eastern North America, make good replacements for stiltgrass. I have often found them growing underneath stiltgrass, and once established, they can often out-compete it.

Clearweed (Pilea sp.)
Clearweed, or Pilea sp, are weedy annual plants in the nettle family, but without stinging hairs. Learn how to cultivate these plants in a natural garden setting.

White Snakeroot - A Versatile and Little-Known Wildflower
White snakeroot, Ageratina altissima, is a wildflower native to Eastern North America; here learn how to identify it, how to grow it, and how it supports the local ecosystems.

Want to become an expert on North American grasses? This is a heavy-duty botany book, with keys, but it is not a field guide and not for the beginner.

More About Native Plants and Ecology

Native Wood Poppy vs Invasive Greater Celandine Identification
How to identify and distinguish the wood poppy native to eastern North America, from the invasive lesser celandine, a similar plant native to Europe.

Benefits of Forests for Humans
Benefits of rainforests to humans, moderation of climate, temperature, rainfall, and wind, economic value of forests, etc.
Updated: 07/02/2016, cazort
Thank you! Would you like to post a comment now?
2 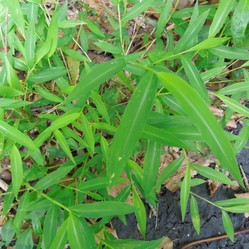 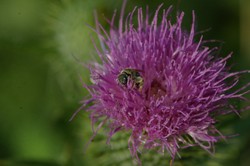 People often spray herbicides to get rid of all weeds. But killing certain weeds and wildflowers might destroy a food source for butterflies, bees, or birds.
76%  3   9 AngelaJohnson
Weeds