John Lennon and Yoko Ono's 'Happy Xmas (War Is Over) is one of the most enduring Christmas songs of the rock era and most certainly one of the best solo singles from an ex-Beatle.

We all remember the songs that hit the prized number one spot, but what about those that only made number two?
Many of these are every bit as memorable as the songs that beat them, and very often are more deserving of the top spot.
In this series of features I will be looking at those songs that came second and bouncing a bit of the deserved glory back onto them.

Happy Xmas (War Is Over) - John Lennon and Yoko Ono

It’s that time of year again when the revered Christmas hits of yesteryear re-chart, and none are more highly revered than John Lennon’s classic ‘Happy Xmas (War is Over)’.

The song has become a festive standard, charting numerous times since its release in 1972. Its highest chart placing was number two in December 1980, uniquely kept off the number one spot by another Lennon classic, 'Imagine'. But the tragic circumstances that led to this chart feat, the murder of Lennon by lone gunman Mark Chapman on December 8, render this particular achievement one generally not to be celebrated.

Written by Lennon and Yoko Ono, the record was co-produced by the pair with the legendary Phil Spector.

The Plastic Ono Band assembled at New York’s Record Plant studios on October 28 and 29, 1971. The band, which always had a flexible line-up, included Nicky Hopkins on piano, chimes and glockenspiel, Jim Keltner on drums and sleighbells, Hugh McCracken on guitar, and Lennon’s Hamburg comrade Klaus Voormann on bass, although a delayed plane flight meant Voormann was only available to play on the B-side.

McCracken, working with Lennon for the first time, was, in true Spector tradition, one of four acoustic guitarists on the record (a fifth was moved to bass to cover for Voormann). Journalist Richard Williams, who was at the session, recalled in his NME report that Lennon immediately noticed a likeness between McCracken and old Liverpool friend Ivan Vaughan.

Williams recalled that when he was told the guitarist had played on McCartney’s album ‘Ram’, Lennon joked: “So you were just auditioning on 'Ram', were you? Yeah. He said you were alright!”

This wasn't the only time Lennon's distinctive sense of humour came to the fore, either. As he rehearsed the guitarists he told them to pretend it was Christmas, just to get them in the mood. But when one of them said he was Jewish, Lennon told him to pretend it was his birthday instead!

John and Yoko - Happy Xmas (War Is Over)

Although Phil Spector was only co-producing the single, he was still responsible for its distinctive Christmassy sound, bringing his wealth of experience with him. During the recording he asked: “How can you make a song called ‘Happy Christmas’ without bells?” Before long chimes and a glockenspiel were hired for Nicky Hopkins, and Jim Keltner was equipped with a set of sleigh bells. Playing back the results, Spector told Lennon with a smile: “I know something about Christmas records, you know.”
Spector had made his own classic Christmas album ‘A Christmas Gift For You’ in 1963, featuring artists he was producing such as the Ronettes, The Crystals, Bob B. Soxx and the Blue Jeans and Darlene Love.
Spector’s presence was undoubtedly felt by the rest of the Plastic Ono musicians too, as he busied himself with the arrangements and pushing all the players to their very limits.
When Lennon and Ono took to the mic to sing their parts, Lennon was having trouble with his voice, and Spector said: “Yoko’s out singing you, John”. Shaking his head in disapproval he chided: “He’s smoking his ass off while he’s singing”.
Although Spector clearly displayed a great deal of professionalism in producing such a classic Christmas record, his first impressions of the song were not so favourable. When Lennon played it to him, he noticed the first line was taken from an American top five record called ‘I Love How You Love Me’ by the Paris Sisters, which he produced in 1961.
Lennon also later admitted that he used the tune of an old folk song called ‘Stewball’, and commented: “I like quoting from old songs, but you get into such trouble with copyrights. It’s a drag.”
Most of the parts were finished on the first day, but the strings were added by Spector a few days later.

Phil Spector's Christmas Gift For You

Listen, The Snow Is Falling

On the second day the musicians assembled again to record the B-side, Ono’s ‘Listen, The Snow Is Falling’, although it proved to be a less than harmonious experience for them all.

First the Lennon’s disagreed about the tempo, with John complaining that she was getting the band to play too fast. Then they disagreed about whether John should play guitar. As Lennon put his guitar down, saying he wasn't going to play on it, Ono retorted by saying she'd been asking him to play the organ all along.

Klaus Voormann nearly walked out after an argument with Ono about how the song should end, until Lennon intervened and calmed them both down. And finally, recording finished, both Spector and Ono had to stop the musicians from jamming during mixing, with Ono complaining that the musicians rarely took her songs seriously.

But the song, the first ‘Yoko tune’ that Lennon ever heard, was also one of her most commercial, and the track was rapidly finished when everybody realised how good it was. The finishing touches were added to Ono’s dainty melody when a sound effects album was consulted for the sound of footsteps in the snow and strong wind.

Yoko - Listen, The Snow Is Falling

A day later work was resumed on ‘Happy Xmas (War is Over)’, when the Harlem Community Choir arrived at the Record Plant to sing the refrain “War is over if you want it”. The choir was made up of thirty black kids from the Harlem district, who, apart from a few teenagers whom Lennon instantly referred to as “The Supremes’, ranged in age from four to 12.

If to some ears (although not mine) the refrain is slightly reminiscent of the rampant political sloganeering on the following year’s 'Sometime in New York City' album, then it may be because its roots were in a peace campaign Lennon and Ono undertook in 1969.

The ‘War is Over’ campaign was launched on December 16, when posters bearing the words “War is over – if you want it – Happy Christmas, John and Yoko” were placed in 11 cities around the world, including New York, London, Tokyo, Berlin, Rome and Hollywood. Thousands more leaflets bearing the slogan were distributed around the world. The campaign began the day after Lennon and his Plastic Ono Band had played a Peace for Christmas concert at the Lyceum Ballroom, London, to raise money for UNICEF

On Christmas Eve Lennon and Ono joined a fast at Rochester Cathedral to publicize world poverty.

The ‘war is over if you want it’ slogan was not utilized again until Lennon and Ono wrote their Christmas classic, investing it with added symbolism by giving it to the children to sing. It also provided the track’s musical highlight – a stroke of genius that gave it a massive injection of Christmas spirit and helped make it one of our most enduring festive classics.

For the choir it must have been a bit like being back at school – after some of the mothers made sure their children were looking smart and behaving themselves, they were taught the song from a blackboard by Lennon and Ono.

The session ended with a sleeve photo by 'Abbey Road' snapper Lain Macmillan, which featured the choir with Lennon and Ono, Spector, his wife Ronnie Spector and brother-in-law Joe, Klaus Voormann, Jim Keltner, Hugh McCracken, the engineers and the studio secretaries. Spector even took charge when the photo was taken, urging everybody to shout “happy Christmas” on the count of three.

The record was released in America on December 1, but in spite of ‘Imagine’ reaching number three just the previous month, ‘Happy Xmas’ barely charted.

It didn’t see the light of day in England until a year later, due to legal problems involving Beatles publishing companies Northern Songs and Maclen Music. They were suing Lennon over violation of a 1965 agreement that decreed the companies had exclusive rights to all Lennon’s songs, including those written with others. ‘Happy Xmas (War is Over)’ was one of five songs written with Yoko Ono that was disputed, and in which Ono Music Ltd was claiming a share. Paul McCartney had previously been involved in a similar dispute over songs he wrote with Linda McCartney.

The delayed release didn’t stop the record doing considerably better in England than in the States – it reached number four in December 1972, and has charted several times since. Most notably, it made number two following Lennon’s murder in December 1980.

Christmas is always a time of mixed feelings where pop music is concerned, with records ranging from the overly sentimental and mawkish to songs that attempt to invest the festive period with real meaning.

But Lennon’s highly distinctive record, which must rate among rock’s top three Christmas songs, is one of the few festive tunes to come into the second bracket. It skillfully manages to combine a festive theme with the Lennon’s highly publicized peace campaign, creating a piece of musical magic that conjures up all the olde English charm of a traditional Christmas. And it was a charm occasionally missing in some of Lennon’s later work. For instance it manages to convey the message without resorting to the political posturing and empty sloganeering that marred ‘Sometime in New York City’.

And not only does ‘Happy Xmas (War Is Over)’ feature the musical might of a former Beatle, but the production genius that is Phil Spector, a man who created the ‘Wall of Sound’ and made records by early 60s girl groups such as The Ronettes so memorable.

While Lennon may not have been the most technically brilliant singer around, his was probably one of the most individual voices in modern popular music – making this record instantly recognizable if nothing else.

But what do you expect from an artist who not only had years of experience behind him, but who was also adored, for very good reason, by millions around the world?

I am indebted to the Richard Williams book 'Phil Spector - Out of His Head' for the information in this article. 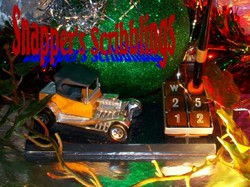