Karen Gillan to star in Touch of Cloth on Sky One

Karen Gillan, best know for playing Amy Pond in Doctor Who, is to feature as rookie cop Kerry Newblood on Touch of Cloth on Sky One on 9th and 10th August 2014.

Former Doctor Who companion Karen Gillan is to star in the third series of comedy detective show Touch of Cloth. The two-part series – "Too Cloth for Comfort" –  is due to be shown on Sky One on Saturday and Sunday 9th and 10th of August 2014.

This is the third and final helping of Charlie Brooker's comedy. It took DCI Jack Cloth (played by John Hannah) a while to come to terms with his wife's murder and now he's hit with the news that his brother, Terry (also played by Hannah, with a wig and a beard), has been killed.

The troubled detective hopes to catch the mystery killer with help from his team, including number two DI Anne Oldman (played by Suranne Jones), who, nursing a Cloth-inflicted broken heart, has suddenly developed a savage drinking problem. He also has to deal with rookie Kerry Newblood, played by Karen Gillan.

Clues lead Cloth and co to a small English town called Funtcuck (be careful when saying out-loud) and a spa retreat where Terry was receiving treatment for anger issues against a certain sibling. Owner Damien Vull (played by Adrian Dunbar) is fast-tracked to the top of the prime suspect list – the man does love a sacrificial ceremony albeit without the sacrifice bit – but, when the body count starts to rise, Cloth realises that the culprit is, yes, closer to home.

Scottish actress Karen Gillan plays new recruit Kerry Newblood, but is best known for her role as Amy Pond in Doctor Who, her first appearance in which was actually as a policewoman, but it turned out to be a kiss-o-gram. Playing Amy Pond won Gillan a National Television Award in 2012. She also plays blue-skinned assassin Nebula in the 2014 film Guardians of the Galaxy.

Her first TV appearance was in 2005 as Teri Cotter in an episode of Rebus. She played various parts in The Kevin Bishop Show from 2008 to 2009. Her first recurring role was as Coll in The Well in 2009. More recently she was Daisy in NTSF:SD:SUV and she is due to appear as Eliza Dooley in Selfie. Other film roles include Jane Lockhart in Not Another Happy Ending and Kaylie Russell in Oculus.

Also in Touch of Cloth

Team behind Touch of Cloth

Touch of Cloth was a Zeppatron production for Sky and was filmed in Uxbridge. It was written by Charlie Brooker, Daniel Maier, Jason Hazeley, Joel Morris and Ben Caudell. The executive producers were Charlie Brooker and Annabel Jones. The programme was produced by Mat Chaplin and directed by Jim O’Hanlon.

Were Cloth and his brother twins? Would it have been because of that or because of the popularity and versatility of the actor Hannah that prompted his playing both roles? 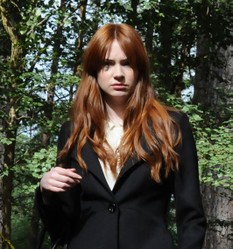 A look back at the career of Peter Capaldi, named as the twelfth of the main actors to play the lead role in Doctor Who.
26%  1   3 SteveRogerson
British TV