There is a true meaning of Christmas that we need to remember, but it does not mean we have to forgo all other aspects of celebrating.

Keep Christ in Christmas is often heard, but how many people actually pay attention to the message? What are the ways, and yes, there are several, to keep Christmas consistent with its real meaning?

Another question is whether there is anything wrong with enjoying the holiday for its meals, presents, and decorations. This question is easy to answer, those things and some others that bring happiness have a place in celebrating the holiday as long as there is a component of the celebration that keeps the real, deeper theological meaning of Christmas in mind. And this can be accomplished in a multitude of ways.

The Meaning of Christmas

The nativity set is a vivid reminder of the true meaning of Christmas.  Indeed, it was first used as a teaching tool.  Whether it is simple with but the three main figures, or elaborate, it brings to mind the significance of what happened over two thousand years ago.  To Christians this means that God, as a person of the Trinity, came among us.  Not everyone accepts Christianity, but to those of us who do the nativity set represents a very holy event.

The most extensive nativity set I have seen was one that encompassed the entire town of Bethlehem.  But this is nothing compared to what I envision, a nativity set with multiple streams of angles held aloft, one or more for each choir of angles.  It seems to me that there would have been a great, and quite possibly a full, presence of all available angels at such a great event.  Yet there is often a token representation of their presence.

Years ago the message that we should keep Christ in Christmas appeared on bumper stickers.  Then came placards, and a few sponsored billboard signs.  Eventually, a magnetic nativity image became available, intended to be attached to cars.  Unfortunately, some cars would not hold a magnetic sign.  We had a Saturn, which did not allow for a magnetic sign to be attached.  The material was something that was designed to withstand denting and scratching.  I had a magnetic nativity sign that would not affix to the vehicle.  Now, with lawn flags growing in popularity a new Christmas flag proclaiming the message has become available.  Of course older items such as bumper stickers need not be discarded, they still proclaim the message.

A Proper Celebration of Christmas

Advent is the time of preparation.  In reading, I get the impression that different countries celebrate Christmas in different ways, some spending the time before Christmas in preparation, while others decorate early and celebrate for a prolonged period.  No matter how your country celebrates Christmas, there should be some reflection of the theological meaning of Christmas prior to Christmas Day, and preparation made for the day and its meaning.

The Advent wreath can help, especially with the attendant prayers, but the preparation for Christmas should be greater than a wreath with four candles that are lit in order over the Advent season.

The Holy Sounds of Christmas

Christmas carols can be religious, and bring the meaning of Christmas into focus, or secular.  There is nothing wrong with singing Frosty the Snowman, but it does not reach the theology of the season.

I am certain any list of Christmas carols will be meaningful only in a part of the world.  I suspect each nation has its own, and respect that.  In fact, adding what you sing in your part of the world in the comment section below is a way for us to all share knowledge.

In the United states I would suggest:

Joy to the world;

Angels we Have Heard on High;

It Came Upon the Midnight Clear;

and, We Three Kings.

When I taught in a minor seminary, mathematics and chemistry, years ago there were five priests, and about six of us who were not priests, two faculty members (he English teacher and myself), a librarian, a secretary, and two grounds keepers.  The five priests hosted a Christmas party, and one of them proclaimed it time to sing German Christmas carols.  I had not realized they all had German names.  It was an interesting experience, singing in the language in which many Christmas carols were originally written.  And, they did have printed lyrics ready for the occasion.

Not Everyone Is Christian

In the City of New Orleans there is a celebration every year.  Before Hurricane Katrina there was both a driving tour and a walking tour of an extensive light display.  Today, the driving tour is a thing of the past.  Most of the decorations have always been nonreligious in nature, but the event was titled Christmas in the Oaks at the time when it began.  At the end of the driving tour was a large minora with a sign proclaiming it to represent an early tolerance of religious freedom.  No one really complained.  Then, the name was changed to Celebration in the Oaks, and some intolerant people started a campaign to reinstate the word Christmas.  Really, there is no harm in being inclusive of the Jewish people, the change was not anti-Christian, but one of tolerance.  Those who wanted the old name back attempted to raise money to underwrite the event, but were refused.  The question here is can one be so intolerant and still proclaim the true meaning of Christmas?  My understanding of Christianity is that it does not reject the Old Testament, but complements it with the New Testament.  Old Testament symbols are not anti-Christian.

Nativity Set and Santons
Nativity sets are popular during the Christmas season, but adding santons is unique to just a few places. It is a practice well worth considering.

I have never gone to such a meal, for it seems that it is the expensive restaurant that participate. However, I have heard of them. My thought is the menu varies restaurant to restaurant, and the designation is more of the style of the meal than an exact menu. There is a fascination with food in Louisiana, and New Orleans has a radio show that runs for hours just about every day, hosted by Tom Fitzmorris. He also runs a website on food. The link here https://nomenu.com/?s=Le+Reveillon will get you to the right section, and you can easily determine menus vary,

How sad that the priest was shot whilst out in the community where he had worked.

I am particularly interested in the French Christmas meal, Le Reveillon and would like to know more about that. Christmas food is always of interest to me.

There is a special French dinner, Revelion (not certain of spelling), at some large restaurants.
The Nativity set that included the entire town of Bethlehem was in a rectory. The priest who owned it has since died, he was shot while riding his bicycle to walk his dog alongside his church. This was after being transferred to a less safe neighborhood.
There are two tours, one in New Orleans in City Park, and one in a suburb called Metairie in Lafreniere Park. In New Orleans the driving part is no more, lost to Hurricane Katrina. There is a charge to walk in the area. In Metairie there is a nominal fee to drive a vehicle among the lights, but no charge to walk through. Since the fe is small, five dollars per car last year, people drive and park in a lot, then walk among the lights.

blackspanielgallery, Are there special French- or Spanish-influenced Christmas observations in the French Quarter or elsewhere, outside New Orleans? Which Bethlehem had the entire town as a nativity set? Was the driving and walking tour of decorated private or public buildings?

As for distribution, some areas have a wide range of income levels, others do not. But parishes are assigned a twinning parish, so it is the less fortunate area that might benefit. Twinning parishes are not just for a season, but are permanently assigned. It takes a bishop with vision to install such a program.

They don't go to my area ; we give them to two areas in the north of my diocese- one where you taught when you first started and one where our youngest sibling was born.

The only poverty where I live is poverty of Spirit.

I had not heard of this toy mass of yours. It is a really nice thing to do.

But, you live in a classier area than I do, so if there are poverty problems where you are, it shows how bad things are becoming.

I have organised a Toy Mass at church for about 25 years for local children who don't get Christmas gifts. Everyone is invited to bring along a wrapped gift marked with a gender and age on it. These are taken to local collection points where they are very much needed.

Poverty in Uk is rising as Frank says. The local supermarkets had a collection last week. As we entered, we were given a list of things that we could buy and donate so families can have some food at Christmas from the food bank.

These are certainly ways of keeping Christ in Christmas.

BSG, that American program seems like a good idea. In the UK, whose poverty levels are soaring under this incompetent, morally irresponsible bunch that we miscall a government, a large section of the poor now suffer food problems, while the richer element enjoy luxury. The churches co-operate with food programmes all year, though an extra effort is made at Christmas.

I should have also mentioned Christmas tree programs in many Catholic churches in Louisiana. Yesterday I saw four Christmas trees on the altar. They had paper ornaments. The way this works is the congregation s invited to take one or more ornaments. There is a code that associates with a name not revealed to the person who takes the ornament, but a description such as girl thirteen needs toy, or adult female 30s needs large size coat. The next week the wrapped gifts are left under the tree with the ornament attached, to aid with distribution to the needy. Some trees then have food ornaments, such as three cans of green beans. The next week the food is left, unwrapped, by those taking the ornaments. Now, it gets too close to Christmas for most purchases, but a third set of ornaments appears with readings and prayers. Those taking these agree to read scripture or pray during the next week. Finally, a thank you message appears. Then, on Christmas eve in time for the vigil Mass, ( I do not know if this a a worldwide practice.) the trees are lighted.
The ornaments are generally colorful construction paper, but those yesterday were white angel shape ornaments. 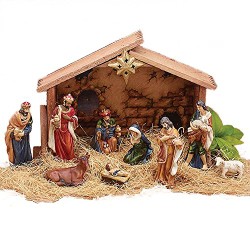