While these days the tradition of kissing someone under the mistletoe is seen as little more than an excuse for a drunken snog at a Christmas party, its origins date back to Norse mythology and a mother's protection of her son. Steve Rogerson explores the legends around this rather unique and unusual plant.

Kissing under the mistletoe has become an established part of the Christmas tradition. Sprigs of mistletoe are hung around the house, often over doorways, and anyone lucky or unfortunate enough to be caught standing under a sprig has to oblige with a kiss. People hanging around under the sprigs with a hopeful or desperate look on their faces has become a common sight at many Christmas parties.

However, it should come as no surprise to learn that this tradition has roots that are far from Christian in origin. While mistletoe was considered sacred by druids and believed to have medicinal powers and be able to boost fertility and ward off evil spells, the origins of the kissing ritual come from Norse legends.

According to Norse legends, the kissing under the mistletoe tradition arose from a mistake from Frigga when trying to protect her son Balder. Balder told his mother that he had dreamt that he was to be killed. To save Balder, she ordered every animal and plant not to harm him. She specified that Balder could not be hurt by anything that grew on the earth or under the earth, but mistletoe grows on other trees.

Once Loki, an enemy of Balder, realised this, he tricked the blind god Hoder into killing Balder with a spear made out of mistletoe. As Balder was the god of the summer sun, his death brought winter to the world until he was resurrected by Frigga. The pale berries of the mistletoe are believed to be Frigga’s tears for her son.

Frigga corrected her mistake by making the mistletoe a sacred plant that brings love to the world by insisting that any couple standing under the mistletoe must kiss each other.

More Kissing Under the Mistletoe

In France, kissing under the mistletoe is normally part of the New Year celebrations.

Some Scandinavian traditions see mistletoe as a plant of peace and truces between warring parties are meant to be signed under the mistletoe.

Dung on a Twig

Once people believed mistletoe grew from bird droppings and the name originates from the Anglo-Saxon word for dung – “mistel” – and for twig – “tan” – making mistletoe literally mean “dung on a twig”.

Mistletoe is classed as a hemiparasite in that it grows on other plants, normally trees, extending its roots into the branches to draw out nutrients. However, it can grow on its own in the same way as normal plants.

SteveRogerson, Thank you for practical information, pretty pictures and product lines.
All the mistletoe that I've come across almost always looks and photographs nicely. It makes wildlife happy so I tend to like it. It may be somewhat parasitic but it reels in wildlife that also help spread the seeds of the trees where the mistletoe is located.

It surprises me how many cultures viewed mistletoe the same way. Which culture would have been first to traditionalize it? 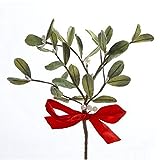 A look at the origins of religious celebrations around the solstice and equinox
34%  1   4 SteveRogerson
Wiccan, Pagan, Druid

Some modern traditions have their origins in Pagan fertility rites
Loading ...
Error!