The fourteenth issue of KIndle genre magazine KZine has a certain darkness running through many of the stories, and is all the better for it

KZine is a science-fiction, fantasy, crime and horror magazine for the Kindle. Published three times a year, it aims to provide original genre fiction for the mobile reader. This issue (Issue 14, January 2016) contains nine stories with “Fundraiser” by K McGee standing out as an excellent piece of fiction, and I look forward to reading more of her stories. Bringing a smile on my face was John Sies’ “The Weber Defense”. Over the years, I have read a lot by Ian Whates, and “It’s a Small World” does not disappoint.

When a bar fight breaks out, a customer realises the old man that smashed down onto the table in front of him was a past acquaintance, and – after taking a shine to his daughter – decides to help them retrieve a pendant from a local merchant. But everything was not as it seemed in this tale of villainy and double cross that Whates has weaved so well.

A fast talking shop assistant talks rookie cop John into buying a bullet with his name on it as a lucky charm. John thought little of it afterwards, but his job saw him escape death more than once. Such luck, though, was not all it was cracked up to be in this absorbing story, very dark, that pulls the reader into the mind of a disintegrating human being.

“Pennies on the Dollar” by Rhoads Brazos

Lots of people like shopping, some are obsessed with shopping, but this story – told through the eyes of a sceptical daughter – is about a woman who has taken shopping to world championship status. Is there anything she can’t buy? Her daughter is about to find out. Sort of funny, very weird, and just a tad dark.

A tale of one man’s resistance against an evil tyrant. Simply told, with a lot of violence, but nevertheless making a political point about fighting back. A shame it wasn’t longer so the characters could have been given more depth and the back story fleshed out.

Detective Jake Talbot’s social interface wakes him up early – there’s been a kidnapping and Jake has to go into the Primitive Zone where people do not use social interfaces. This is usual fare in that it explores whether technology really improves lives or makes us less human, and told well from the viewpoint of someone facing that conflict. Brings back memories of Logan’s Run.

“This Narrow Escape” by Betty Rocksteady

This is odd. On the face of it, a fantasy about the world shrinking while the narrator stays the same size, but in reality a tale about a woman trapped in a claustrophobic marriage. Very clever, very enjoyable.

“The Blind Room” by Goran Sedlar

Crime and punishment. A society where random citizens are chosen to inflict punishment on those found guilty. But Gabriel didn’t want to play that game, so when he was locked in the blind room with his victim, he tried to change the way things worked. Not everything goes to plan in this dark, bloody story.

Turner comes to the rescue of a drunken student when she is accosted by three frat boys as she leaves the bar. Later, she hints at a plan of revenge. Turner turned her down but their paths crossed later and he discovered she was not as helpless as she seemed. A very engrossing story with both characters having mysterious back stories, but this time it is better it stays that way. Top notch.

“The Weber Defense” by John Sies

It is not every day a gecko on your bedside table tells you the world is about to end, but that is what happened to Ryan. With a humour not dissimilar to Hitchhiker’s Guide to the Galaxy, this is an entertaining end to this issue’s entertainment.

Not much in the way of extras this issue, just the brief biographies of the contributors. But we do happily learn from K McGee’s that there are more stories about Turner to come.

The cover art was by Dave Windett and the magazine was edited by Graeme Hurry.

SteveRogerson, Thank you for product lines, pretty pictures and practical information.
In particular, This Narrow Escape and Weber Defense interest me. Is it the physical world or the protagonist's social world that shrinks?

Not unlucky for the reader, as issue 13 of science-fiction, fantasy, crime an...

A look at the stories in issue twelve of science-fiction, fantasy, crime and ... 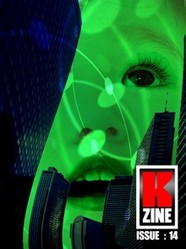 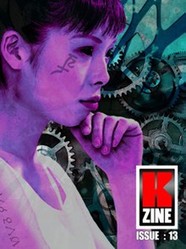 Not unlucky for the reader, as issue 13 of science-fiction, fantasy, crime and horror magazine KZine for Kindle has an enjoyable mix of stories
36%  1   5 SteveRogerson
Esoteric Magazines

A look at the stories in issue twelve of science-fiction, fantasy, crime and horror magazine KZine, available on Kindle.
Loading ...
Error!