There are lots of labour saving devices out there, and they’ve changed our lives beyond recognition, even in my lifetime. Much easier to do the washing now than it used to be.

The world (the Western World at any rate) has changed beyond all recognition over the past 100 years. Even in the last twenty years, there have been some amazing technological developments - most people have a mobile ‘phone nowadays. I can remember when they were first introduced, they were like house bricks! And technology still moves on. We have a vast array of labour saving devices, supposedly to give us more free time. Do they really save us time? Or if not time, effort? 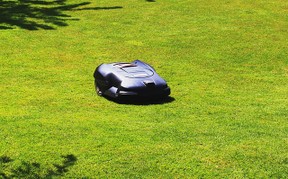 On my way to work the other day, I saw a wonderful toy - there is a grass covered bank near to the station, and the council now has a remote control lawn mower!  It was moving slowly up and down that bank, mowing as it went.  I really wanted to have a go but the operator, probably sensibly, wouldn’t let me.  That got me to thinking about labour saving devices generally, and what we do with the time they save.

Actually, I’m not always sure that they do save much time: when I get home in the evenings, I spend the best part of the next two hours dealing with e-mails.  Somehow, I managed to survive perfectly well before the days of e-mail…  But then, I suppose Jane Austen would have said that she survived perfectly well writing her books by hand, and I can’t imagine that!

So what have we got that is labour saving?

I can remember, as a child, washing clothes by hand, and my Mum had a mangle in the garden, to squeeze the excess water out of the clothes.  Then we got a twin tub washing machine, which is what I had when I first got married, although automatics were on the market by then.  I thought I was in seventh heaven!  Nowadays, I don’t wash anything by hand.  Of course, I don’t have anything really delicate to wash, but it all goes in that machine on a low temperature…  Definitely saves me time.

My tumble dryer gets a lot of use too, unless the weather is really good and I’m at home all day (well, we all know how changeable it can be in the UK!).  I’m a “do the washing and get it ironed” kind of girl, so it’s washed, in the dryer/on the washing line and then on the ironing board.

Speaking of which, I remember my grandmother had two flat irons, one either side of her fireplace.  I didn’t realise the significance as a child, but I now know that there were two because one would be heating whilst the other was in use.  They were heated on the kitchen range.  And I didn’t use an ironing board until I was a teenager, even though my mother owned one.  We used the table with an old, folded sheet placed on top of it on which to do the ironing.  I also remember some of my mother’s contemporaries having old jam jars that had grease proof paper lids with holes punched in them so they could sprinkle water on the washing if it had gotten too dry…  I think my steam iron makes life much easier.  Strangely, I didn’t like the steam generator iron though (nor the amount of electricity it used!) so I was secretly quite pleased when that one went wrong and I reverted to my old steam iron. 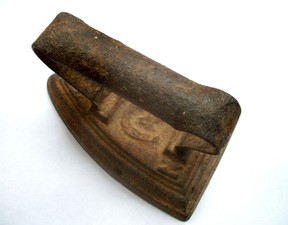 What about in the kitchen?  Well, I don’t have a big food processor anymore but I love my Bamix (if it’s good enough for Gordon Ramsey, it’s good enough for me!).  In the winter, I put the slow cooker on and boil up a load of vegetables and then Mr Bamix comes out and pops in to whizz it all up for a lovely soup.  Just the job!

My microwave (which is also a grill and convection oven) is great too - I always cook rice in the microwave, and it’s great for heating up left-over’s.  My Mum used to have to put the food on a plate over a pan of simmering water to heat up food if my Dad was late home…  No, my microwave is far better.  The versatility of having the oven and grill is good too, if I’m cooking for a lot of people.

I don’t have a dishwasher in my kitchen at the moment, but I can assure you that when I have it re-fitted, a dishwasher will be included in the plans.  I can think of better ways to spend my time, and nowadays, they use far less water.

Then there is the vacuum cleaner.  It is sheer bliss to be able to switch on and whizz round.  I don’t have any carpet in my house - bare floors are easier when you have four cats - and using a broom (yes, I really do sometimes) just seems to move the dust and hair from one place to another.  So a big thumbs up to the vacuum cleaner. 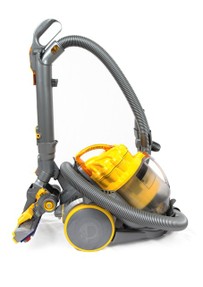 The steam cleaner.  I absolutely adore the steam cleaner.  It’s so versatile and easy and can be used for just about everything.  And it saves me having to use harsh chemicals.  (And if I don’t use it, I do tend to go for the old fashioned vinegar or bicarbonate of soda, because I think they are better for the environment.)

Let’s not forget the good old gas boiler that heats the water for the central heating and the shower/bath.  Far better than the days when I had to set the fire and light it first thing in the morning so that there’d be some heat in the house, and far cheaper than the immersion heater to heat the hot water.  Of course, you can’t roast chestnuts on a radiator…

Epilator for legs, rather than waxing or shaving, (relatively) light hair dryers, electric alarm clocks that remember the time set daily, without winding…  I love all of my other gadgets too, and that includes the computer, and I know my life is easier with them than without.

Does a computer save you time?

No, it gives me more work

Not a bot. It earns me money though so I'm not complaining.

I don't think I'll ever find it relaxing, for me it's just another job that has to be done

That's a really good point Emma Rose. I like the positive spin.I couldn't go out with creased clothes.

Ah yes, ironing. I comfort myself with the thought that it would have been so much harder a year ago ;-)

Emma, I'd rather have a cat purring at (or for) me than something that sounds like a cat. Just my preference, I guess. The ironing will be blitzed again tomorrow as we have houseguests this weekend and I hardly want to look like a slob. I have a day off work as I undertook an evening training course earlier this week so it'll be paperwork, ironing, writing and eBay tomorrow. The only things I write longhand these days are lists and meeting minutes. Transcribing said meeting squiggles takes longer than the meeting in the first place :-(

Thank you very much! Good for J K! And good for you for still line drying (me to when the weather permits). I do still do a bit of writing longhand, but then I have to translate it back into English!

And it must be the time of year, I haven't written enough either!

I suppose it's just habits we get into, plus, I never get up early enough to iron as I go. More correctly, by the time I've spent an hour on the computer (and I agree with you about them, they don't save time, but do help to earn a bit more) I always end up rushing. I have a - well, not sure feather duster is the correct term - but it does the same kind of job, I seem to have very friendly cobwebs. They keep coming back!

I like my broom, I have to say. And for the vinyl flooring (and the painted walls) in the bathroom, a damp mop is the very thing. My husband swears by the feather duster, as he uses it to knock ceiling-crawling insects out as well as to dust with. Labour saving devices for me are the guys who run the ironing service I use, as they take the worst of the chores off me when I can afford to ask them to. This month I haven't written enough so I am going to spend my week off up to my eyeballs in ironing. When I would rather be up to my eyeballs in writing, but there you go. What did I say about the computer not saving me any time? You and mum think alike in terms of once it's dry, iron it. I'm a bit lazier on that score... 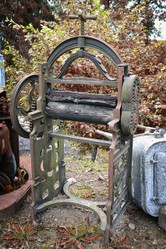 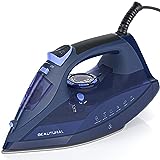