London Marathon Records: The Odd, The Strange, The Different

The London Marathon sees a wide array of unusual costumes, many of which are donned to raise money. But it also means that a host of records are smashed every year.

Every year in Spring London holds an event that boasts over thirty thousand people turning up to participate. All are there ready and raring to run twenty six miles and three hundred and eighty five yards. It is, of course, the annual London Marathon.

With its being a race – and one that is well publicised and watched by millions – one of the main attractions is seeing who finishes first, and in what time. Many professional runners take part in the marathon, lured by competing to fill that place (and the £1 million pound prize is certainly attractive, too). UK long distance runner Paula Radcliffe gained greater recognition by smashing the women’s record in2003, which also still stands as the world record for women’s marathon running. The current fastest London Marathon time is held by Emmanuel Mutai in 2011, finishing in two hours, four minutes and thirty nine seconds.

However, the majority of participants in the race are amateurs, there for the challenge, the fun and more importantly to raise donations for charity. Many turn up in a series of outlandish costumes – some of which boggle the mind as one would imagine they would only serve to make an already gruelling event ten times worse. But there is no denying that such costumes are what help to draw in the hundreds of thousands of people that turn out to watch the event as it loops through London.

And while all eyes are on those who finish in the number one spot, every year there are many other ‘firsts’ that are continually smashed, recorded and entered into the Guinness Book of Records:

Fastest marathon while running with an egg and spoon – Dale Lyons 3:47

Fastest marching band in a marathon – led by Mike Lomas 7:55

The competitive spirit is alive, especially in the running world. Respect for... 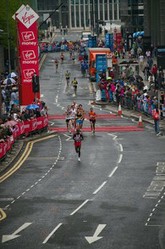 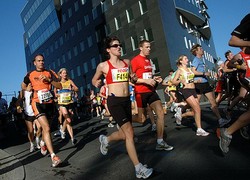 The competitive spirit is alive, especially in the running world. Respect for the personal qualities of resolve and discipline may be a significant factor for the marathon runner.
100%  16   11 Ragtimelil
Other Cycling Types