The food crisis that is affecting the Sahel region of West Africa may esculate to famine terrority if a response is not delivered quickly.

Charities are prompting governments and leaders to learn from the mistakes during the East Afria famine -- namely to send aid and support in a much more timely manner to stop the situation spiralling out of control.

In the summer of 2011, a drought that has been called the worst in sixty years stuck Somalia and East Africa. Two years of interrupted seasonal rains caused widespread crop failure and loss of livestock. Millions of people in south Somalia fled the arid conditions, moving to refugee camps in other countries where they risked cramped, dirty conditions.

Though weather conditions are impossible to control, there were other factors that escalated the drought. Governments and leaders can under fire from charities such as Oxfam for not responding in a timely manner. Waiting for almost a year since the first warnings that a famine will occur if conditions are left to proceed without intervention, the drought in East Africa ended up being officially declared as such by the UN before major moves began.

Now there are fears that the same could happen again.

The Sahel area in West Africa has been hit by a deadly mix of low rainfall, poor harvests, lack of food for livestock and poverty caused by loss of livelihood and high food prices. Up to thirteen million people are feeling the strain of the food crisis, which could lead to starvation and malnutrition. This has all been on the back of the serious drought that struck the Sahel in 2010 from which the area is still recovering.

But mistakes are there to be learnt from and there has been more mobilisation for West Africa’s plight. Charities have been quick to buy food and stockpile supplies. Oxfam launched an emergency response in order to raise £23 million to immediately start tackling the problems that could lead to another widespread disaster. It has used the money in various ways, including four particular stages: market gardens, well rehabilitation, animal vaccinations and cash for work.

Market gardens are gardens set up by Oxfam where people can grow lettuces, onions, carrots and other vegetables. Gardens are usually maintained until April when they are followed by the heavy rains which are best for growing cereals and grains, but with the weather being so unpredictable these gardens are even more important.

Having access to a clean, maintainable water source is a problem across many areas of Africa, but never is it more needed than when a drought hits. Not only for people to drink, but for livestock, for watering crops, for cleaning and washing to maintain hygiene among other reasons. Oxfam works to maintain current wells or help communities build new water sources.

Animals are very valuable to communities in the Sahel area. As well as providing food from milk and meat, they are also many people’s livelihoods, with their depending on their herds as their sole income. Animals suffer badly during droughts, with people having to ration water and food for themselves, and animals gathering around small, dried up watering areas can breed disease. To help this vaccinations are administered by Oxfam aid workers, saving the lives of the animals and negating the cost that families would have to spend on the medications themselves.

The cash for work scheme allows people to partake in much needed tasks such as building water channels or building projects and being paid for their efforts. With food prices rising families and individuals are hit with the strain of buying enough to go around. It also provides opportunities for people who often want to work having been unsuccessful in finding jobs elsewhere.

Though much is being done to help the crisis, with shadow of the East Africa famine hanging low enough to be a reminder to governments and leaders to act quickly, there is a distance to go still. It is said that June onwards will prove to be even more difficult, being dry and arid months and much help is still needed to get the Sahel communities through this arduous time. 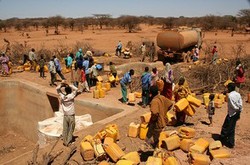 A month ago I shaved my head to support cancer patients and raise money for Relay for Life. I donated my hair to Locks of Love and it felt amazing to give!
83%  4   20 TheWritingCowboy
Charities