Alison Steadman plays a retired lollipop lady who walks out on her husband after 40 years of marriage in Love & Marriage, an ITV sitcom due to start on Wednesday 5 June 2013.

Gavin & Stacey pair Alison Steadman and Larry Lamb are reunited in Love and Marriage, a new six-part sitcom due to start on ITV on Wednesday 5 June 2013. Alison plays Pauline, whose life changes when she retires from her job and leaves her husband. She moves in with sister Rowan, who is having an affair with married man Tommy, played by Larry Lamb.

The liberating effects of ending a 40-year-old marriage is the unusual subject for new sitcom Love & Marriage, due to start on ITV on Wednesday 5 June 2013. The six-part series follows the life of Pauline Paradise (played by Alison Steadman) who walks out on her husband Ken (played by Duncan Preston) after nearly 40 years together.

Pauline has just retired from her life as a lollipop lady in Coventry, where she has lived her whole life. But leaving Ken not only affects her but her sister and her sister’s lover as well as the marriages of her three grown up children.

Actors in Love and Marriage

Alison Steadman has twice been nominated for a best actress Bafta – for playing Betty Simpson in Fat Friends and Mrs Marlow in The Singing Detective – but her outstanding career dates back to the 1970s. She is well known for playing Pam in Gavin & Stacey, Pauline Mole in Adrian Mole: The Cappuccino Years and Mrs Bennet in Pride and Prejudice. More recently, she was Rose in The Syndicate. She received an OBE in 1999.

Duncan Preston played Douglas Potts in more than 300 episodes of Emmerdale and he was Dennis Stokes in a dozen episode of Coronation Street. But his first soap appearance was way back in 1964 as Ginger Parsons in an episode of Crossroads. Other roles have included Mr Clifford in Victoria Wood: As Seen on TV, Jonathan Haslam in Surgical Spirit, JF Kennedy in Chalk and Stan in Dinnerladies.

Celia Imrie plays Pauline’s sister Rowan Holdaway and Larry Lamb (also well known for his role as Mick in Gavin & Stacey) her lover Tommy Sutherland, who often returns to his own wife. Stewart Wright plays Pauline’s son Kevin and Ashley Jensen his wife Sarah, a thirty-something couple, and on the face of it an ideal couple. Kevin’s life starts to unravel when he steals money to fund his son’s rugby tour.

Slightly older are Heather and Charlie McAllister (played by Niky Wardley and James McArdle). Heather is Pauline’s daughter and Charlie is a handsome firefighter who attracts women like a magnet. Heather gets pregnant after a one-night stand with workmate Ashley Roehampton (played by John Heffernan), but she is not sure who is the father.

Finally, there is Martin and Michelle Paradise (played by Graeme Hawley and Zoe Telford). Martin is Heather’s older son and the couple have five children. Their roles change when Michelle goes out to work and Martin gives up his job to look after the children.

Adding to the confusion is Jessica Sula, who plays Scarlett Quilter, who is looking for her mother Emma, who happens to be Rowan’s daughter.

Team behind Love and Marriage

Written by Stewart Harcourt and Chris Niel, Love and Marriage is a Tiger Aspects production for ITV. Debbie Isitt was lead director with Roger Goldby also performing directing duties. The producer was Lawrence Till and the executive producers were Will Gould, Rebecca de Souza and Stewart Harcourt. 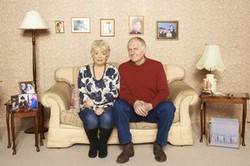