Rory Kinnear plays Lord Lucan in an ITV drama that tries to unravel the mystery of the aristocrat's disappearance forty years ago.

Lucan is a two-part drama due to start on ITV on Wednesday 11 December 2013. It looks back at the events in November 1974 when Lord Lucan's nanny was beaten to death and the lord subsequently disappeared, never to be seen again. Rory Kinnear plays Lord Lucan and Christopher Eccleston is John Aspinall, the owner of the Clermont gambling club

One of the biggest mysteries in British aristocracy in the past century has to be the disappearance of Lord Lucan forty years ago after his children’s nanny was beaten to death. Now, ITV puts a new take on the mystery in Lucan, a two-part drama starring Rory Kinnear in the title role and due to start on Wednesday11 December 2013.

When his marriage to Veronica Lucan (played by Catherine McCormack) collapses, the lord is determined to regain custody of his children leading up to that fateful night on 7 November 1974 when 29-year-old nanny Sandra Rivett (played by Leanne Best) is beaten to death at their London home. Shortly afterwards, with a warrant out for his arrest, Lord Lucan disappeared and his whereabouts have remained a mystery ever since.

Lord Lucan was a member of the Clermont set, which was based round the Clermont gambling club owned by John Aspinall (played by Christopher Eccleston). “Aspinall was from a middle-class background and the people he was running with were aristocrats,” said Eccleston. “So he attached himself to them. Lucan could bring him business. Lucan could bring him money. And Lucan could give him money because he was an obsessive gambler.”

Rory Kinnear won a British Independent Film Award in 2012 for best supporting actor for his role as Bob Oswald in the film Broken. He is also well known for playing Bill Tanner in the James Bond movies Quantum of Solace and Skyfall. He is the son of actor Roy Kinnear. TV appearances include Kyle Betts in Five Days, Denis Thatcher in Margaret Thatcher: The Long Walk to Finchley, James Mitcham in Waking the Dead, Septimus Ludlow in Cranford, Dan Bishop in Vexed, Michael Callow in Black Mirror, Reverend Septimus Crisparkle in The Mystery of Edwin Drood and David Whitehead in Southcliffe.

Christopher Eccleston is best known for playing the lead role in Doctor Who in 2005, which earned him one of his three Bafta nominations. His career dates back to the early 1990s and one of his first major roles was as David Stephens in the film Shallow Grave. He played DCI David Bilborough in Cracker and Nicky Hutchinson in Our Friends in the North (also earning him a Bafta nomination as did the part of Stephen Baxter in The Second Coming). More recently, he was Claude in Heroes, Willy Houlihan in Accused (for which he won an Emmy), Joseph Bede in The Shadow Line and Daniel Demoys in Blackout. He can also be seen in cinemas as Malekith in Thor: The Dark World.

This version of the Lord Lucan story is based on John Pearson’s book The Gamblers and was adapted for television by writer Jeff Pope. Pearson appears in the story, played by Paul Freeman, and he is seen interviewing the older John Burke (played by Michael Gambon; the younger version is played by Rufus Wright).

“Dramatically, I decided John himself needed to be a character, so that we could switch back and forth between then and now as he pieces everything together and moves towards the startling conclusion,” said Pope. “It’s important to underline that what John Pearson was told is only a theory, a version of events given to him by a dying woman. Could there be a ring of truth to it? Ultimately, that’s for the audience to decide.”

An ITV Studios and Group Entertainment production for ITV, Lucan was executive produced by Francis Hopkinson and directed by Adrian Shergold. The producer was Chris Clough.

This was passable. I enjoyed it but wasn't wowed by it. 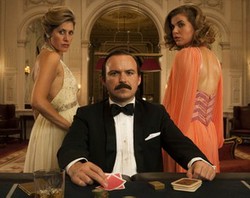 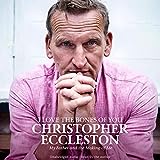