Synopsis: A scientist, Dr. Henry Jekyll, performs an experiment that brings out his evil side and, under his evil persona, rapes and abuses a young woman. Determined to suppress his “Mr. Hyde” personality, he stops the experiment. Only, as it turns out, Mr. Hyde has other ideas and reemerges to cause more harm to the point he ends up wanted by the authorities. 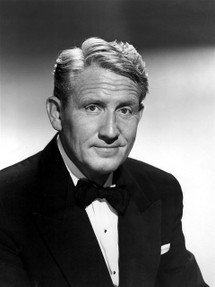 There are several versions of this particular movie and I’ve seen most. So far, however, this one continues to be my favorite.

A big part of the reason for this is Tracy’s performance. This movie essentially calls for the star to play two, completely opposite, roles and he does an excellent job of doing just that. His Dr. Jekyll character is charming and friendly. Yet, when he plays Mr. Hyde, he is just downright scary (especially when he smiles). And, unlike some other versions of this movie, he does it without a great deal of physical change. There’s some makeup involved, but you can still see the same person.

One other thing I like about this movie is it is a good film to watch when you want to learn more about domestic abuse. He pretty much tortures that young woman (Bergman). Yet, despite the abuse, she still refuses to leave him or report him to the authorities, even when her best friend finds out the truth. In fact, along with Tracy, I think Bergman’s performance really helped carry some of the scenes and keep them much more intense than expected.

The movie does take quite a few liberties with the book. However, in this particular case, that is actually a good thing because it keeps the action going from start to finish with a few surprises thrown in. This is especially true of when he tries to break up with his fiancée (Turner) because he needs to keep his secret and wants to protect her. This, of course ends with disastrous results and just makes the movie much more entertaining as a result.

As I said before, there are a variety of similar movies but this one easily is the best version of it. If you haven’t seen this film, I would highly recommend taking the time to watch it at least once. Even if you don’t like black and white movies, I think you’ll be pleasantly surprised.

StevenHelmer, Thank you for practical information, pretty pictures and product lines.
The library system here does not have Dr Jekyll and Mr Hyde among its Blu-ray and DVD collections. So I expect not to be seeing any version now or in the immediate future.

Would you say that reboots and remakes are as competitive as they can be or would you opt for a colorized release nowadays?

Three horror films that could benefit from either a better script or better s...

A review of the 1961 movie about a cat seeking revenge for the murder of her mistress.
70%  1   9 StevenHelmer
Horror Movies

Three horror films that could benefit from either a better script or better special effects.
Loading ...
Error!