Jodie Foster stars as a recent widow, whose six year old daughter goes missing on a TransAtlantic passenger plane. Or is she hallucinating that the girl was ever there?

What would you do if your child went missing, but nobody believed that she even existed?

That is the predicament faced by the unfortunately named Kyle Pratt (Jodie Foster), in this suspense thriller set aboard a huge airplane. At least there are only so many places where her young daughter could be, saving a parachute at 30,000ft.

But when those places have all been checked and the little girl has still not been found, what then? Are we watching a mother at her most ferocious, or a descent into madness?

Madness or a child disappearing in a small and finite space? Flightplan doesn't reveal its secrets until the very end. 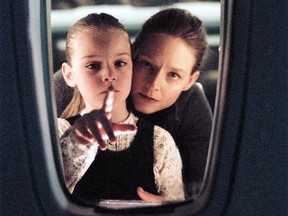 It goes without saying that Jodie Foster was great in this movie.  She's great in any movie.  Her strong performance actually created many of the red herrings thrown to undermine an otherwise predictable script.

Jodie Foster stars as Kyle Pratt, a propulsion engineer whose husband recently fell from a tall building and was killed.  She's uprooted her six-year-old daughter from their home in Berlin, in order to return to Kyle's hometown in the USA.

So far, so tragic, but things take a turn into strangeness, when little Julia Pratt disappears.  As one person tells Kyle, the airplane is fundamentally a large tube.  How far could a young girl wander?

But there's a bigger question here.  Kyle's husband committed suicide.  His coffin is in the hold.  Kyle is on medication and she admits to having taken a walk around Berlin with her husband's ghost.  She's paranoid and dazed.  Was her daughter ever even there?  According to ground control, Julia was in her father's arms when he jumped.

This could either be a movie about a woman slowly going insane in a public, confined space.  Or it could be about an unlikely abduction.  Jodie Foster's strong performance makes both interpretations seem feasible. The crew, other passengers and viewers are kept guessing until the climactic ending.

The Tragic Terror of a Missing Child

One of the things that works so well with Flightplan is the central premise of a missing child.

Most of us have had situations where a little one wanders out of view.  There's that initial rationality moment, where you work out where they are and check it out.  Then there's the rising panic, when they're nowhere that you look.

Fortunately, for the majority of us, the burgeoning terror is over very soon, as our errant child is found or returns.  But you can imagine quite easily what it would be like to be Kyle Pratt.

The universality of the main worry is a definite plus point for this movie. It's one which will keep you empathizing with the main character.

The Humiliating Terror of Going Mad in Public

For those viewers who reach the conclusion that Julia doesn't exist, then there's a secondary common concern to replace that of the missing child.

How we seem to those all around us is possibly one of our most all-consuming pre-occupations.  For most, it emerges in wearing the right clothes, listening to the right music, passing exams and getting an appropriate job, buying the correct things and living in the proscribed place.  We're so unduly concerned with fitting in and being popular, that the notion that we simply lose control is beyond comprehension.

Not coping in public, in front of strangers is bad enough; but what about actually going insane?

I've seen this as a fictional device before. Neil Gaiman uses this concept to great effect in Neverwhere.  Allowing oneself to descend into genuine public madness and despair was one of the great challenges placed upon the protagonist.  It beat even taking on a Champion in battle.

For both Kyle Pratt and Neverwhere's Richard Mayhew, those watching on are left cringing on their behalf.  Yet we're still working out what we'd do in their situation.

The more eagle-eyed amongst you will have already guessed the main inspiration behind Flightplan.

In many ways, this is Alfred Hitchcock's classic film The Lady Vanishes, brought kicking and screaming into the 21st century.  The train is replaced by a double decker Airbus; Miss Foy is substituted by a six year old child.  Kyle Pratt is essentially Iris Henderson.

None of this is accidental.  Flightplan openly set out to update the earlier movie.  It retains much of that Hitchcockian claustrophobia and suspense.

But it shouldn't be viewed as a remake either.  In fact, some fans were left incensed by the fact that The Lady Vanishes wasn't credited, nor was Alfred Hitchcock, in a movie which borrows so heavily from both.

The Lady Vanishes and Flightplan

The writing on the window is just one of the myriad of references in 'Flightplan', which pay homage to scenes in Hitchcock's thriller.

Lots of Plot-Holes and a Weaker Third Act

Let me state categorically that I did enjoy Flightplan. I would recommend watching it, if only for Jodie Foster's performance, if nothing else.

Yet there was plenty there to keep the viewer guessing too.  Red herrings thrown in to muddy the trail; clues placed blatantly in view, or received subtly in the background.  I did find myself wrong-footed once in the middle there!

However, for all of that, I did find the storyline to be quite predictable. I'd worked several key points out before the big revelations. There were also quite large plot-holes, which I couldn't reconcile, even after I knew every fact for certain.

The finale also moved away from Hitchcock into a purely Hollywood style action thriller. To me, it lost something in the process.

Flightplan DOES Pass the Bechdel Test

It's quite rare to find a movie which passes the Bechdel Test with quite the aplomb of Flightplan.  There were numerous examples to pick and choose between.

Testing the representation of female roles in movies, the Bechdel Test asks that there be more than one named woman or girl.  She has to have a conversation with another female; and it can't be about male characters.

Kyle Pratt spoke with her daughter Julia in the opening scenes, and several named female flight attendants, as well as a female therapist on board.  The majority of those conversations were about airplanes (Kyle is a propulsion engineer, who had helped build the plane they were flying on) or her daughter.

It passed the Bechdel Test hands down.

What is the Bechdel Test?
Three questions are asked of each movie. They are so simple that it would be harder to fail than pass. They examine the role of females in that film. Nearly half fail.
Updated: 01/20/2013, JoHarrington
Thank you! Would you like to post a comment now?
9

It's been a while, so I can't be sure that my older self wouldn't pick holes where my younger self didn't, but my memory is that it's quite good!

Oh! I haven't seen Sommersby. Is it good?

I realise I'm coming back to this conversation VERY late in the day, but RE. Jodie Foster in a heterosexual relationship, the one that leaps out at me is Sommersby.

It's been so long since I saw that movie, I can only remember the horrible scene that happened later on. But it's still a bust up, not happy families.

At the beginning of the Accused, doesn't she have a bust up with her boyfriend, which is why she goes to the bar??

Jodie's excellent in everything.

You've got me thinking now. Has she ever been in a heterosexual relationship in any movie? You're right, nothing springs to mind.

Not that this has anything to do with the film but now I get why Jodie Foster has, to my knowledge, never played a wife with an actual husband (she had an ex in Panic Room). There's been rumours of her sexuality since the 1990s and now that the cat's out of the bag it makes sense. :)
This is a good film but nothing beats Silent of the Lambs. Jodie's excellent in both.

I agree with what you said about the dialogue towards the end. It felt like the final act came from a different movie.

I didn't know that about the gender change in the script. That really does put a different complexion on that Bechdel Test pass.

Great review, Jo. I really love the movie, although some of the dialogue towards the end - I was going to give an example, but don't want to give anything away for people who haven't seen it - seemed a little unnecessarily contrived; telling the audience what we already know.

I'm not sure how I feel about the Bechdel test, as the part of Kyle was originally written for a man (they didn't even bother to change the name). So, I'm not sure how much of the dialogue was already finished when that gender swap happened. I suppose, officially, it passes, but it's a little tainted....in my view, anyway. 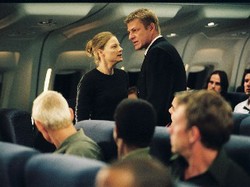 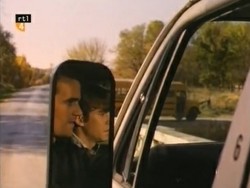 Based on a true story, twenty-six school children and their driver are kidnapped from the school bus, in Chowchilla, California.
100%  18   10 candy47
Drama