New York City Pictures - A Beauty Or A Beast?

Picture New York. Is it beautiful and elegant or dirty and cramped? Maybe it's all of the above. It all may depend on how you look at it and who's doing the looking.

New York City pictures can capture a city that's staggeringly beautiful, scarily deceptive, annoyingly dirty, reflectively mellow and hopelessly disjointed. New York City may be the whole world in microcosm, constantly remaking itself on the fly in image of people who live here.

In New York City, you walk from graceful Old World architecture to broken down apartment flats in a single block. Central Park anchor Manhattan and all its contrasts. On the south, you've got glitzy retail, like the Apple Store and the Time Warner shopping complex, and it runs north through changing neighborhoods until grinding to a halt in hardworking, middle class Harlem.

Tidal estuaries break the land up like a puzzle as the outer boroughs beckon relief. The views are spectacular, mundane, surprising and endlessly changing.

Five In The Morning

What You See Is What You Get 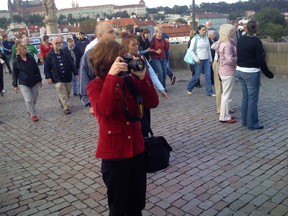 Stepping outside the familiar tourist scenes and looking at New York as a place where people live and work opens up a range of views that only reveal themselves for an instant. Yet, they can tell a story with more fiber and truth than casual visitors can know.

According to fine art photographer Deborah Julian, she just happened to be up early one winter morning when she looked out her window and saw another woman stretching in another high rise. The city was just awakening. A ghostly tanker pushes its steel hull through up the East River toward Hell Gate. A thin layer of fresh snow gilds the border.

A photographer of streets and urban landscapes, she seldom lets the final image settle before adding artful touches that enhance and clarify her pictures. In this one, the image is almost too beautiful and layered with ghostly surrealism.

This one of the ways you can look at New York. It's far from the only way.

An Underground World In New York

What Lies Beneath the Power and Glamour

Even under glamorous locations, like Bloomingdales, Rockefeller Center and Macy's, New York's subway system is probably the filthiest and least user friendly in the world. Bungled by managers rewarded for political connections ahead of merit, the subway benefits from a lack of competition, especially from cars, because the streets are so congested.

In Between Two Universes (Montague Street, Brooklyn), a woman leaves the rapidly gentrifying neighborhood of Brooklyn Heights and enters New York's underground city. True, the system is fast and safe, but at a sacrifice to cleanliness and air quality no other city I'm aware of accepts.

Contrasted with 5:00 am Manhattan Sunrise, you can see how the question of New York's beauty might be answered otherwise.

57th Street Subway Station highlights the simple, but roughed up lines of an efficient subway line used by almost everyone, even the Mayor.

Pictures of New York, Across The Spectrum

Is New York City Beautiful or....

New York Pictures - Beautiful, Mellow, A Fantasy or A Frustration?

As you can see, even one fine art photographer's view can be spiked with contrasts.

New York City can be as colorfully beautiful as a bucolic pond, as in Daydreamers (Central Park, NYC) or marked by fanciful illusions. Two young girls pass an autumn afternoon among the reflections in pond, just yards from the traffic jams at 59th and Fifty. Elsewhere in Central Park, a fantasy seems to be enacted as a man takes flight in the direction of of a woman under the shimmering Minton Tiles.

East River View, seen from mid-river along the promenade on Roosevelt Island, the river seems graceful as it washes beneath the Queensboro Bridge, the United Nations in the distance. Even the pigeons seem at peace. But on the other side of Manhattan, in Waiting For The Light, we see the extreme alienation of New York street corners. No one in the sour looking crowd, not even the young women who've been shopping together at Victoria's Secret, are alert to the others around them.

Pictures of New York can isolate beauty or increase the unpleasant contrasts.

New York City Is Beautiful And More And Less

The question, Is New York City Beautiful? remains eternally unanswered in Deborah Julian's Passing (Brighton Beach), a deceptively simple scene for an elevated subway station in Brooklyn, in the neighborhood Neil Simon wrote about and where Neil Diamond also grew up, now a gritty Russian community that calls itself "Moscow On The Sea."

An elegantly dressed woman with sculpted hair being blown by an arriving train is set on chewing gum matted platform. What looks like a ghost train of shadowy figures inside arrives.

Is it beautiful or something else? Yes, and yes.

Wonderful description of NY. I'm an L.A. girl, but I would love giving NY a try. I'm tired of the burbs. It's too isolating and boring. Joy Behar said she has never been so lonely in all of her life as when she lived in L.A.
I do love L.A. though.

The oldest operating hotel in New York City, The Algonquin was the meeting pl... 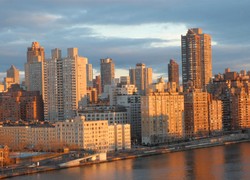 The New York Botanical Garden is a beautiful place to visit throughout the year. Get away from the city for the day and enjoy natural beauty, right in the heart of the Bronx!
62%  6   6 candy47
New York 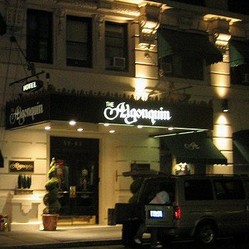 The oldest operating hotel in New York City, The Algonquin was the meeting place for the famous 'Vicious Circle' of literary giants.
Loading ...
Error!