There are three pubs in Nottingham that claim to be the oldest in England, but which is telling the truth?

Nottingham in the heart of England is the home of England's oldest pub. However, three of the city's bars claim that title as their own, but only one can be correct. Steve Rogerson looks at the competing claims of Ye Olde Trip to Jerusalem, The Salutation and The Bell. Perhaps it is best to play safe and visit all three.

If you visit Nottingham, you have a chance to drink in the oldest pub in England. The snag, if it can be called a snag, will be that three pints in different pubs are necessary to achieve this.

For, you see, there are three pubs in Nottingham claiming to be the oldest pub in England, and all with some justification. They are Ye Olde Trip to Jerusalem, The Salutation and The Bell Inn.

A good place to start is Ye Olde Trip, built into the cliff walls that support Nottingham Castle. This was once the brewhouse for the original castle (knocked down years ago and replaced by a stately home looking building that houses a museum and art gallery) and proudly boasts on its walls “the oldest inn in England”. If asked, they will claim the name dates back to the crusades. In fact, the name is relatively recent as the pub used to be called The Pilgrim. Don’t let that put you off though, because it is a delightful pub with excellent beer. Make sure you visit the upstairs bar where you will see the pub is actually dug into the walls of the cliff; it is like drinking in a cave.

The next stop is The Salutation on Maid Marion Way, definitely not a pub for the faint-hearted, because it is haunted. Apparently, spirits have been spotted by regulars over the years, but what is not recorded is how many spirits of another kind said regulars have to consume first. The most famous ghost is an urchin child called Rosie who hangs around in the caves underneath the pub. If you are lucky, there might be trips to caves while you are there, in which case pop down and have a look. Otherwise, stay up top and sample their ales.

Finally, to Angel Row just off the Old Market Square for The Bell, another pub with caves underneath. Once you couldn’t miss The Bell because it was yellow. The paint job was done in 2004 to make it look like it would have done in the days when it was built. This got a plaudit from one council department for bringing a bit of history back to the city and a telling off from another for not fitting in with the look of the square. Common sense initially prevailed and it stayed yellow, but now it is back to being white. This is an old coaching inn and inside there are small rooms and a large room at the back. It feels like a traditional pub and the beer is always well kept.

Which is the oldest?

But which of the three is the oldest? All three have dates painted on the outside wall. If these are true, Ye Olde Trip wins easily with 1189 – The Salutation can only manage 1240 and The Bell 1437. However, it is one thing to paint a date on a wall, it is another to prove that the date has some validity.

A few years ago, British TV channel Channel Four as part of its History Hunters series ran a competition for the three pubs to find documentary evidence to prove their claims. Ye Olde Trip went from best to worse, as it could only show pub status from 1760, though it could make a claim for the existence of the brewhouse for much earlier. The Salutation managed to prove there was a building on the site as early as 1415 but could only show it was a pub from 1725. Which left The Bell as the winner with 1638. The other two still dispute this.

Wikipedia mentions that in 1437 William de la Pole and his wife Alice Chaucer established a school at Ewelme, Oxfordshire, and that this school to this day has the reputation as the earliest, still-standing school building still used as a "local authority school" in the United Kingdom.

Were the revelations of 17th- and 18th-century origins harmful, helpful or neutral to the business of the three pubs?

One point of pronunciation. "Ye old trip...." was pronounced "the old trip." We never said ye for the. The reason behind this is the loss of the 27th letter of the alphabet, the letter thorn, which I cannot replicate here because the computer will not allow it. Thorn was pronounced "th". It looked a littl like a p. Why did it disappear? In 1485 the new printing presses were imported from the continent, but they had no letter thorn, as the continentals did not use it, so printers had to substitute the letter y for thorn. So when you see ye old inne, know that the sign is using spelling from post 1485. Not that this says anything about the date of Ye Olde Trip to Jerusalem, as the sign will have been replaced over the years.

Now the grim bit about inn signs. Why do you think we have the Saracen's Head, the Moor's Head, etc? I believe that it remembers a time when returning warriors brought back trophies, the heads of some great enemy warrior they had slain. There were many fights between English Sailors and Moroccan pirates, hence the Moor's Head, and the Saracen's Head remembers the crusades. Then if the returned warriors ran an inn on the proceeds of what they plundered, they displayed the preserved head as a sign of the landlord's prowess. It is only in the thirteenth century that Norman knights celebrated winning the Battle of the South Foreland by having a raffle, the prize being to cut off the head of the captured French pirate chief Eustace. We are not far distant in time from the headhunter.

I think the name was just made up for marketing reasons, though obviously there is history here as the pub is set where the old brewery for Nottingham castle used to live.

How did the names come about? Was Ye Olde Trip to Jerusalem in any way in existence in some prior building when the crusades launched. Tha would make sense of the name.

Steve Rogerson gives a personal view of being part of the Magpie team in the ... 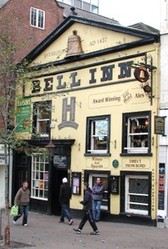