Learn about the only two species of flamingos that are indigenous to the "Old World" - The Greater and Lesser Flamingos.

What are the largest and smallest of all flamingos? Those two species are both Old World Flamingos, and are known as the Greater and Lessor species.

What is an Old World Flamingo? It's one that ls native to what has traditionally been referred to as the Old World: Those regions known well by Europeans before awareness of the Americas emerged.

Specifically these two species of those utterly fascinating birds live in portions of Europe, Africa, and Asia.

Learn a little more about them here on this page, where you'll also find some fine suggestions for gifts for flamingo lovers.

Then, since children can often become fascinated with these avian marvels, I've placed an especially fun treat near the end. It's a video of a talented young girl doing a wonderful interpretive dance which really captures the spirit of the flamingo. Be sure to watch it. This young lady takes flamingo fascination to artistic heights!

The Smallest of All Pink Flamingos 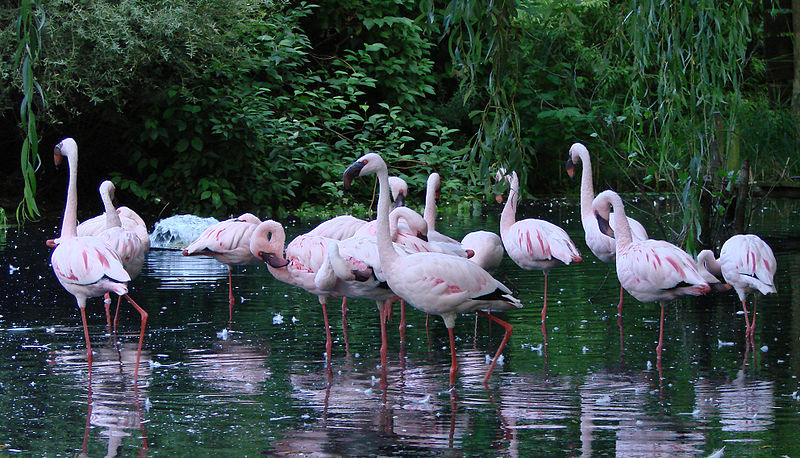 Lesser Flamingos at a zoo in France

Four of the world's six species of these beautiful birds live in the Americas, while the remaining two are native to what we sometimes call the "Old World."

One of those two, the Lesser Flamingo, is the smallest and most common species. The other is the largest one.  (More about the big ones later.)

They are a paler pink than some of their relations, and, like the largest of flamingos, the males tend to grow bigger than the females.  However, these guys only attain a height of just over three feet.  Now, that's pretty big for a bird, but it's fairly small for a flamingo.

Look for  a very dark red beak to tell them apart from others.  Sometimes, it looks almost black.

The Lesser Flamingo is Plentiful . . . 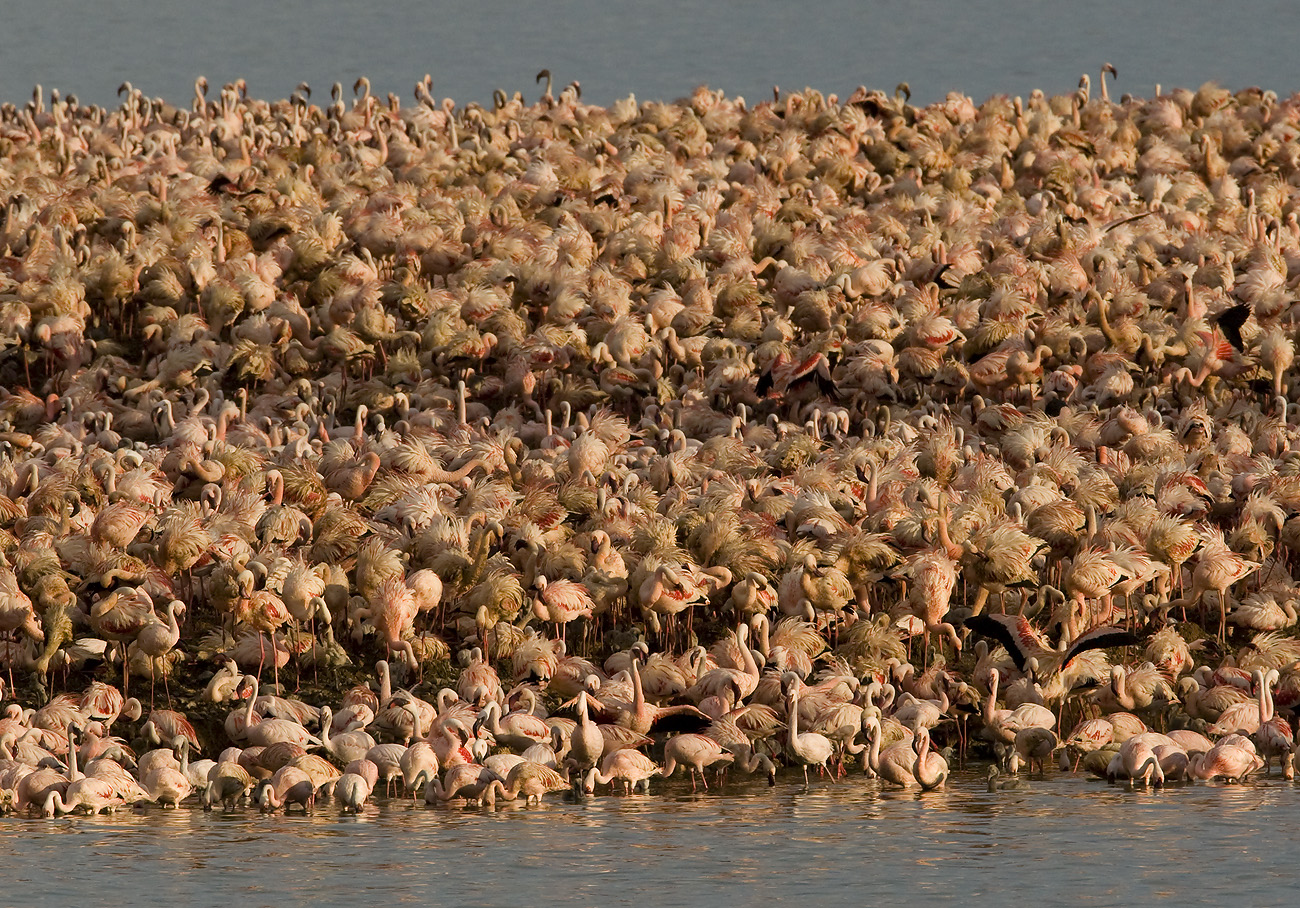 There are currently upwards of three million Phoenicopterus minor s in the world,  But that's an estimate.  Although they gather in herds sometimes numbering in the thousands, they are also quite mobile, so accurate counts are difficult to make.

They are the most plentiful members of the flamingo family - for now.

That's because many of their breeding grounds are being threatened by - you guessed it - development by humans.

The large gathering pictured above is on a man made breeding island at  Kamfers Dam, in South Africa.  Even there, where efforts are being made, the future suitability of the area is in question.

Because many of their breeding and feeding areas are threatened, scientists have seen a recent decline in their population.  Their conservation status is currently "Near Threatened."  But, if the decline continues, that may need to be changed to the more serious status of "vulnerable."

Restrooms and Flamingos in Spain

"Spain travel tip: If bathroom genders are indicated by flamingos, the boy flamingo is the one with a hat. I learned this the hard way."

I could have used this advice a few years ago myself!

See What Stands Out in This Picture? 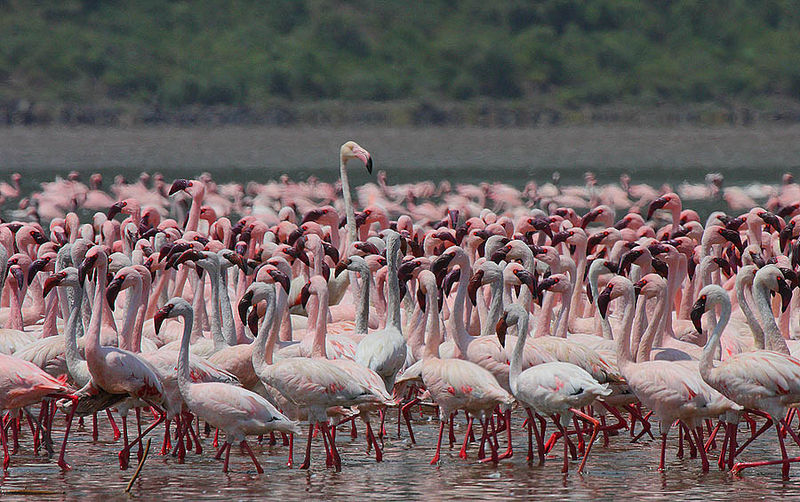 Where's Wally? by Steve Garvie:  A single Greater Flamingo stands out amongst a sea of Lesser Flamingos on the edge of Lake Bogoria, Kenya.

Sometimes, these two species will congregate together.

If you see the two species together, it's easy to pick out which is the Lesser and which is the Greater Flamingo.  This picture is a perfect example of that.  The one very tall bird really stands out among a sea of smaller ones.

The Largest Species of Flamingo

Is the Greater Flamingo

The biggest pink flamingo species of all  is the Greater Flamingo.

Males can exceed five feet tall, and both the guys and gals have a very long life span.   In captivity, they are known to live over 60years.  There is even one in a zoo in that the keepers there believe to be 80 years old!  (He was already an adult when they got him, so they don't know his exact age.)

If you see them in flight, you will notice that the rear edge of their wings is black, while the front wing feathers are a brighter pink than those on their backs.  They have pink legs.  Their beaks are pink with black tips.

Pink Flamingo Gifts for Him

It's a good thing Roman Emperors are now extinct, because if they weren't the Greater Flamingo might be.  The emperors had a penchant for these birds' tongues, which they believed to be a delicacy.

If you needed a really good reason to be thankful for the fall of the Roman Empire, now you have it.

Conservation Status of the Greater Flamingo

Is That of Least Concern

While not as numerous as their younger cousins, the Greater Flamingo, species Phoenicopterus roseus, is more widespread.  They live in a number of different locations, including Spain, Portugal, Greece, Turkey, Israel, Italy, Pakistan, and India.

Their conservation status is that of "Least Concern," meaning the species is widespread and abundant, and is at lowest risk.

Because of the greater number of feeding and nesting grounds, they have to choose from, they are less threatened by the degradation of one or two of them.

They are able to move easily from one location to another because they are quite mobile.  Pink flamingos are great long distance flyers, able to cover hundreds of miles in a single day.

When they go flying, they make a running start.  You can see some of them doing just that in the above picture.

Presents Her Version of a Big Pink Tropical Bird

You simply must see this young girl's interpretive dance, in which she really captures the spirit of these wonderful exotic birds.  Her costume and movements are just perfect!  It's a little hard to hear the music, though, so you may need to turn your sound all the way up to get the full effect.

This little lady displays both talent and training in a thoroughly captivating (though brief) performance.

Was a Greater Flamingo

It's not certain how long the average life span of a pink flamingo is in the wild.  Estimates are anywhere from 25 to 45 or 50 years, depending on the species.  (And the one doing the estimating.) 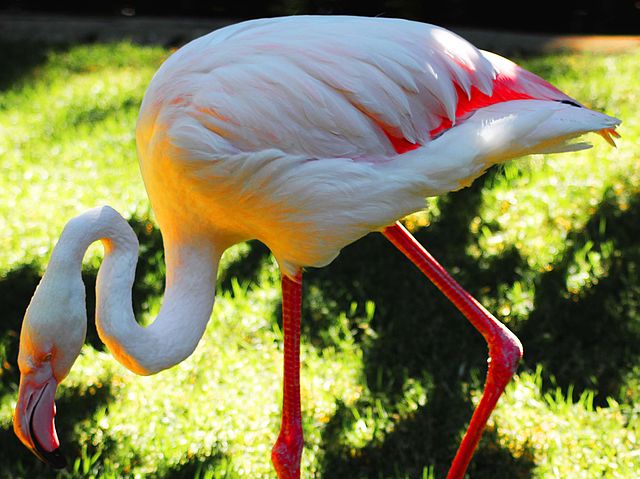 However, one thing IS known for sure.  And that is, how long a Greater Flamingo can live in captivity.

In 1933, an adult pink flamingo came to live at the Adelaide Zoo in Australia. He may have been a couple of years old when he arrived. They named him "Greater."

How long did Greater live there?  Until 2014.   That made him about 83 years old.  That's an amazing log life for just about anyone!

Greater, the Pink Flamingo, at the Adelaide Zoo

Read About the Rarest Flamingos

Thank you for visiting!

If you've found this page about the biggest and littlest flamingo species interesting, then here's another that you might like:

I'm so glad you found my page about old world flamingos and flamingo gifts. What did you think?

CruiseReady, The scarf, the tank top and the watch make great gifts and possessions. Do you know how the Romans liked their flamingo tongue delicacies served? Is there any country now whose culture includes flamingo body parts?

I visited Nakuru Park in Kenya a couple of times and was amazed at the large numbers of flamingos there. You can check that out online, I believe.

Digby_Adams - It always amazes me that they can stand for so long on one leg. What great balance!

burntchestnut - did you know that a large group of flamingos is called a 'stand' or a 'flamboyance?' Agreed that little dancer is quite impressive!

blackspanielgallery - I think a lot of people associate them with the Sunshine State, which may be why the Florida Lottery chose to incorporate a pink flamingo into their logo.

Thank you, Veronica. There are six flamingo species, and they all have a lot in common, but there are some important differences, too.

They really are! The more I learn about them, the more intriguing I find them.

I love your pictures of these birds. Such fascinating creatures!

What a beautiful article ! Thank you for posting it. I never knew there was a distinction between flamingo types. Fascinating and lovely photos too.

I always think Florida when I see the word flamingo.

Once, there were pretty much just those plastic lawn flamingos. Now the trop...

How do you roll? If you're a flamingo lover, here are a few ways to roll alo... 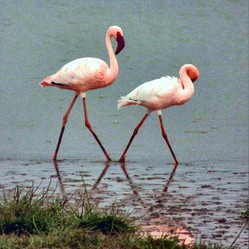 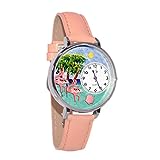 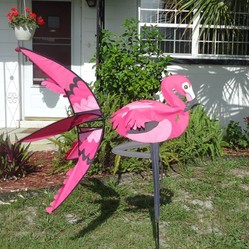 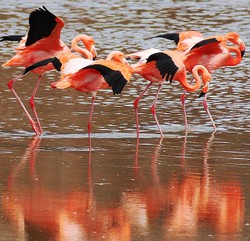 How do you roll? If you're a flamingo lover, here are a few ways to roll along with them when you go for a drive - fun Pink Flamingo Auto Accessories.
Loading ...
Error!