Eight-part Irish-made series Penny Dreadful is due to hit Sky Atlantic on Tuesday 20th May 2014 when characters such as Doctor Frankenstein and Dorian Gray are encountered in Victorian London. Eva Green plays the mysterious Vanessa Ives, Josh Hartnett stars as Ethan Chandler and Billie Piper as Brona Croft. Watch out too for Rory Kinnear as Frankenstein's monster.

The gothic horror of Victorian London is being brought to life in Penny Dreadful, an eight-part series due to start on Sky Atlantic on Tuesday 20th May 2014. The Irish-made production has been jointly funded by Sky Atlantic in the UK and Showtime in the USA, the money from which meant the show started earlier in May in America.

The programme stars Josh Hartnett as Ethan Chandler, an American who arrives in London and finds himself up against some famous characters from history, including Doctor Frankenstein, Dorian Gray and figures from Dracula. He finds himself working with the mysterious medium and possibly unhinged Vanessa Ives (played by Eva Green) but in the second episode he is also befriended by young Irish immigrant Brona Croft, played by Billie Piper.

The first episode is set in 1891 London and sees the police investigating a series of gruesome murders, but they know there’s something darker at play so they recruit the help of Vanessa Ives and Doctor Victor Frankenstein. The second episode sees them meet Dorian Gray at a party where Madame Kali hosts a séance.

French actress Eva Green made her film debut playing the lead role of Isabelle in Bernardo Bertolucci’s controversial 2003 film The Dreamers; Bertolucci actually described her as being “so beautiful it’s indecent”. The role saw her nominated for a European Film Award. She also won the rising star award Bafta in 2007. She is those most recognised for playing Vesper Lynd in the 2006 Bond movie Casino Royale, a role that won her an Empire Award and saw her nominated for three other awards. TV viewers may recognise her as Morgan from the 2011 mini-series Camelot. Other film credits include Serafina Pekkala in The Golden Compass, Angelique Bouchard in Dark Shadows and Artemisia in 300: Rise of an Empire. And she is due to star as Ava Lord in Sin City: A Dame to Kill For.

American actor Josh Hartnett won the best actor award at the 2006 Milan International Film Festival for playing Slevin Kelevra in Lucky Number Slevin. TV viewers best know him though for playing Michael Fitzgerald in 16 episodes of Cracker from 1997 to 1999. He is also no stranger to horror, having made his film debut as John Tate in the 1998 film Halloween H20: 20 Years Later.

British actress Billie Piper has won numerous awards for playing the Doctor’s companion Rose Tyler in 35 episodes of Doctor Who stretching from 2005 to 2013. She is probably now just as well known for starring as Belle in all 32 episodes of Secret Diary of a Call Girl. Other notable roles include Sally Lockhart in The Ruby in the Smoke and The Shadow in the North, and Fanny Price in Mansfield Park. This year she can be seen as Badger in the soon-to-be-broadcast TV movie Foxtrot.

"I'm thrilled to be bringing Penny Dreadful to life here in the UK, where the show is set and was conceived over many years of wandering the streets of London,” said Logan “I think the talent we are bringing together for the show promises to create something memorable.”

The programme was produced for Sky Atlantic and Showtime by Neal Street Productions and Desert Wolf Productions.

What were Penny Dreadfuls?

The show takes its name from the nickname given to popular horror magazines in the 19th century. They were printed on cheap paper, cost a penny and were aimed at youngsters.

SteveRogerson, Thank you for practical information, pretty pictures and product lines.
What did parents think of their young'uns purchasing penny dreadfuls?

The library system here has this trilogy on DVD so I expect to make my way through them this snow-forecast weekend.

The catalog lists a film with the same title from 2007. Would you happen to know about it, whether it fared better, the same, worse with audiences and critics? 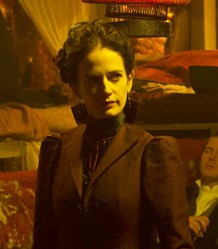