Biological control of pests would seem to be an absolute God-send. Until you find that those introducing alien species haven't done their homework. And then it all goes wrong...

Pests and weeds are the enemy of the gardener and the farmer alike and I daresay that both would like an easy way to keep them all under control. Sometimes though, what seems like a good option at first is the start of a nightmare scenario that is hard to come back from. There are a great many examples of alien species being introduced somewhere that they have no natural predator and nothing to keep them under control.

Any gardener will tell you that greenfly eat the leaves of roses, slugs eat, well, quite a lot of different things, actually, and there are all sorts of other garden pests.  I am not, by the way, saying that I am a gardener.  I am someone who does gardening.  Weeding actually.

My two current pet hates are :

Ivy - my garden is covered in the stuff and it is an absolute nightmare, although I’ve started to get it under control.  (Part of the problem was that I thought it looked quite attractive at the start, so didn’t cut it down in the early days.  Now it’s like a Triffid.)

Brambles - yes, I do like the blackberries but I don’t get enough to do much with.  Probably because the brambles and the ivy are having a battle.

The problem with these two plants is that they travel.  I think they put out little runners and pop up all over the place but apparently, that’s not quite right.  They both have sucker type things and when they find a suitable place they take root.  Anyway, the long and the short of it is that these two plants are the devil’s own job to get rid of once they take hold, but I’m on the case. 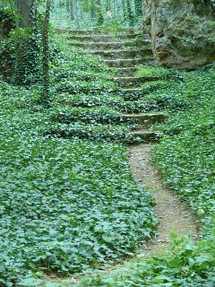 I try not to use weed killer though.  I know it has its place, but I’m not a huge fan, particularly not with my cats and all the other animals that come to visit in my garden.  If I do use one, I always buy one that says it’s not harmful to animals but my view is this: if it’s going to kill the weeds, it can’t actually be great for the rest of us.

What I have never been brave enough to try is any form of biological control in my garden.  A few reasons for this.  One is that I do not have acres of land and I suspect it’s overkill for what I have.  Two is that I don’t know enough about it and haven’t bothered to do the research.  And number three, which is most important for me, is that I know about some of the times when it has just gone so horribly wrong.

The natural order of things, in all species, even mankind until we started getting mechanised, although one might argue that we do a good enough job on ourselves, is for there to be predator species and prey species.  A cycle occurs when predators will increase in number when there is a lot of prey, and decrease in number when there isn’t.  A simple cycle that works effectively unless humans intervene or there is a natural disaster.

The first thing that always springs to mind for me is the Cane Toad, introduced into Australia in 1935 from Hawaii, as a means of controlling the native Cane Beetle.  The little beasty was sugar cane crop, which was a big player in the Australian economy.  To cut a long story short, the toads were introduced into Queensland, in the north east.  Around 100 toads were released at the start and there are now over 200 million of them.  The toads secrete a substance from glands at the back of the head that is toxic to some species, although not usually fatal to humans.  Not fatal, but not very pleasant, as it causes a burning sensation on the skin and eyes.  It can be fatal to other species, including some of the predator species, although nature being the wonderful thing that it is, many of the predators have evolved ways of killing the toads that prevents them being poisoned. 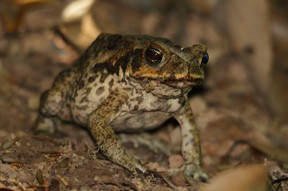 Not all cases of biological control go wrong though.  One of the success stories was the use of Cactoblastis cactorum, a species of moth that was used to control the Prickly Pear Cactus.  The cactus originated in North America, and when it was introduced to Australia, it had no natural predators, ie, it was not a natural food for any of the animal species in Australia and they were no other pathogens to attack it.  The cactus was smothering large areas of land in Queensland, which is, of course, prime arable farming land.  Bring on the Cactoblastis moth, which comes from South America.  The moth larvae eat the seed pods and leaves of the cactus and has very nearly wiped out all of the Prickly Pears.  Yay for the moth.

Now, I’m not suggesting that anything like these problems would happen if I tried biological control, but I think I might just carry on with my secateurs for the time being. That's really useful, thank you Frank... We were ďiscussing rats at work yesterday. As adaptors and survivors, you've get to take your hat off to them. When. I was studying behavioural psychology, we used rats - nothing dreadful, we got them to bar press for milk. Wholly against what we were being taught, but I couldn't help but think they were manipulating us...

Laying carpet is a good idea if you have already dug up the ground, as it destroys re-growth by suppressing light. But you will need to monitor the ground for bramble regrowth. Black polythene sometimes works as a mulch, ground covering, for suppressing bramble and other weeds, but you must have seriously dug the ground first. I had some carpet on my allotment, which suppressed weeds, and never had rat problems underneath.However, there was not much of it.

Currently the allotment committee is discussing rats' presence in neglected areas of certain plots. It is not carpet that is the problem, but piles of soil and branches left by previous tenants. My neighbour has a problem area, as his predecessor left neglected space, and then when he took over he had a heart attack and is now giving up, so the plot next to mine is weedy and neglected again.

Thank you Frank, I thought you would say that about the brambles and Ivy. I did hear about someone mmanaging brambles using carpet but don't know the details. Anyway, not sure I like that, I think it woukd encourage rats.

Apply nematodes for slugs and snails, but you have to do it in Spring. Ladybirds are great enemies of aphids.

I have a pond where there are frogs. There is a large frog, and I have noticed a corresponding absence of slugs and snails. Guess why. Hedgehogs also are great pest controllers, as they eat slugs and snails.

However, for bramble [ blackberry] there is no alternative to digging it out. The same goes for ivy. 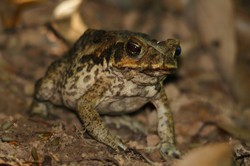 The First-Time Gardener: Growing Vegetables: All the know-how ...
88%  4   5 LiamBean
Engineering

Mushrooms and toadstools grow all over the world, and whilst many are edible others are poisonous or hallucinogenic. Fungi are very important and we need to learn about them.
100%  10   11 DerdriuMarriner
Space Sciences

Earth and Space offers an introduction and text by Nirmala Nataraj, photographs from the archives of NASA, and a preface by Bill Nye the “Science Guy.”
Loading ...
Error!