A review of the Alexia brand sweet potato puffs my wife purchased a couple weeks ago.

Product Description: Bite-sized potato puffs made with sweet potatoes rather than regular potatoes. My wife purchased a bag of these after finding them in the freezer section (near the French fries and other frozen potatoes) of one of our local grocery stores a couple weeks ago and I prepared them as a side dish to go with the grilled fish I decided to make for dinner last night. 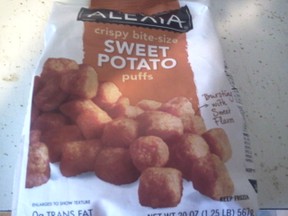 It was a really nice day out yesterday and, even though I was still worn out from the girl’s ice skating competition the day before, I decided to take advantage of the weather and grill.

One of my dinner-time goals yesterday afternoon was to use some of the things in our box freezer, which was filled to capacity. And, while digging for a meat (I ultimately decided to grill some fish fillets), I came across a bag of Alexia Crispy Bite-Sized Sweet Potato Puffs. This is something my wife picked up a couple weeks ago while out grocery shopping and, since they sounded unique (and I didn’t have any other potatoes), I ended up making them. My overall opinion of them, however, was mixed.

As far as preparation goes, I had no complaints. I like items that are convenient, especially when I’m spending a great deal of time outside because I’m grilling. And, these were definitely convenient. All I had to do was pre-heat the oven, put these on a pan and bake them for about 25 minutes. I was able to do that first and get the fish cooked by the time the potato puffs were done.

I’ll give the sweet potato puffs some points for flavor. I’m not a big sweet potato fan and had some doubts about whether or not I would like these. But, they did have an OK taste to them. They were sweet without being too sweet and, if nothing else, were something I could definitely describe as unique.

I think my biggest complaint about these is they never got crispy on the outside as advertised. I keep them in the oven for about what the bag said to keep them and a couple of them were even starting to burn a bit. However, they still came out of the oven a bit on the mushy side and, while not bad, didn’t quite live up to my expectations as a result.

Other than the fact the sweet potato puffs didn’t come out crispy like the bag promised, I did think this was an OK product. It’s not something I can see myself buying on a regular basis. However, it is a product that I would consider purchasing again if I was in the mood for a side dish that offered a unique flavor. And, it is a product I would recommend purchasing at least once if you are in the mood for something different.

In particular, I appreciate your reviewing this product of which you're not a fan even as I and family and friends are. It's disappointing that you followed directions that nevertheless produced a non-crispy product promised to be crispy.

I am not sure I know what tater tots are like :), but how can they be puffs if you bake them? Doesn't the texture change drastically?

I think they refer to them as puffs because they are supposed to mimic potato puffs (AKA Tater Tots).

In what way were they puffs? They weren't regular sweet potato bites? 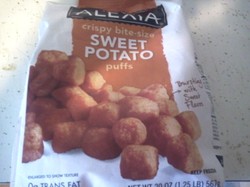 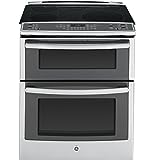