Product Description: Stroganoff-flavored instant pasta product that is prepared by adding milk, water and butter and either cooking the pasta in the microwave or on the stove with about 15 minutes of prep/cook time.
I purchased two packages of this product a couple days ago at one of our local grocery stores at the price of $1.35 per pack and prepared them as a side dish to go with a steak dinner that night. 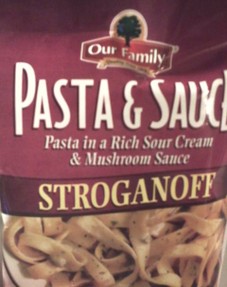 I decided to make steak for dinner a couple nights ago both because I had found some blade steaks on sale for a very reasonable price (a family pack of 8 for $5) and because my wife has been fighting a cold and I figured the red meat would help her keep her strength up.

I originally stopped at the store after work because I wanted some mushrooms and onions to fry up with the steaks. However, while there, I realized we really needed something else to go with them and, since I was on a tight budget, focused on affordable side dish options. The $1.35 price for this pasta worked with my budget and I figured the stroganoff flavor would go well with the beef.

I ended up making both packages of this because, when I opened the first one, I honestly didn’t think it would be enough. I also decided to make the pasta in our microwave oven because I figured that would be the most convenient way to do it and would allow me to concentrate on making the steaks.

One of the first things I discovered after making this product was one package would have been enough. After it was cooked, the pasta was actually considerably more than we could eat in one sitting and we had plenty leftover as a result. Based on that, I would only recommend making one package unless you have more than four people (in our case, two adults and two kids) eating it.

As far as flavor goes, I was honestly impressed with this. It was obviously pre-packaged and there was a major difference between this product and homemade stroganoff. But, it had a decent enough taste considering the small amount of money I spent on it and I would say it was as good as some other, similar products I could have purchased at a higher price.

I’m also going to give it points for convenience. As I said, I made it in the microwave because I wanted to concentrate on the steaks. When I did this, I did have some concern it wouldn’t turn out as well (some products just don’t). But, the pasta came out just fine and the sauce thickened after probably 5-10 minutes. This, again, is possibly even an improvement over many more expensive products.

This was an affordable side dish that offered a lot in terms of quantity and overall flavor. I would recommend purchasing this if you are looking for something to go with beef or some other meat and don’t want to spend a fortune.

StevenHelmer, Thank you for practical information, pretty pictures and product lines.
As I've indicated on your other wizzleys about canned, frozen and packaged foods, I appreciate knowing about quality products in those areas. They help extend their fresh counterparts when there are more guests and re-serving requests than anticipated.

Elsewhere, you and your wife prepared macaroni and cheese in the oven alongside beer-battered cod. How would the meal turn out if you did likewise with the steak and the sauce?

I love Italian food, though I cannot cook great pasta, I order them and eat. Now I want to cook them too.

I ended up buying a can of this for chili dogs yesterday. Read to find out wh...

I purchased a package of this soup mix to have with dinner last night. Read to find out why I don't recommend it.
77%  2   12 StevenHelmer
Other Food & Cooking 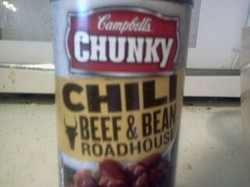 I ended up buying a can of this for chili dogs yesterday. Read to find out what I thought of it.
Loading ...
Error!