Review of Celeste Deluxe Pizza For One

I purchased a couple of these yesterday for just $1 each. Read to find out why I don't think they were worth the money.

Product Description: Frozen single-serving deluxe pizza from the Celeste brand. The pizza is prepared using the microwave oven and is designed to be enough for one person. I purchased two of these pizzas yesterday afternoon for $1 each and ended up preparing them, as per the instructions on the box, as dinner for my wife and me last night.

My youngest daughter had a dance recital yesterday afternoon and, since we were near our local Dollar Tree store, my wife asked if we could stop by there so she could pick up some last-second things for Christmas. While we were there, I took a few moments to check out their freezer section and, when I saw they had Celeste Deluxe Pizza For One, I decided to pick up a couple of them for dinner later that evening.

When I made this purchase, I thought the $1/pizza price was a great deal. However, after trying these pizzas last night, I now believe it was a big waste of my money.

My very first clue about the low quality of these pizzas was when I first opened the box and realized one of the pizzas was missing the silver tray used for the microwave baking. Fortunately, the other one I purchased had one so I was just able to re-use it. But, while I was willing to give the pizza the benefit of the doubt despite this mistake, it did, admittedly, raise some flags. And, it did ultimately turn out to be a sign of things to come.

I had to major issues with these pizzas. The first was the crust. I've had other microwave pizzas in the past and, while they don't turn out quite as well as pizza made in the oven or with a pizza oven, most still have an OK crust. This one did not fall into that category. The crust was very soft to the point it was soggy. Plus, after trying it, I wasn't convince it was even fully cooked, despite keeping the pizza in the microwave about a minute longer than instructed.

I was also extremely disappointed by the lack of flavor. The pizzas had a surprisingly decent quantity of cheese and other toppings on them. But, there still was no taste. The sauce was extremely bland (making it easier to notice the soft/soggy crust) and even the various toppings seemed to lack any flavor.

In fact, my wife and I both thought the pizza, overall, tasted kind of gross. And, when that was combined with the bad crust, we were both very unimpressed and could understand why we only see this being sold for $1 at the Dollar Tree.

The pizza was definitely cheap. But, this was one of those times when we got what we paid for. And, I don't mean that in a good way. This is a product that just was not worth buying at any price.

I believe this is the first time I have ever given a failing grade to a pizza. It's not easy to screw up something that simple so badly.

I've had these pizzas & can wholeheartedly agree with you! 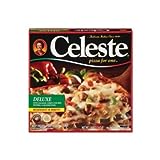 My family had dinner at this restaurant this past weekend. Read to find out what I thought of it.
31%  1   4 StevenHelmer
Sitcoms & Comedies

A review of the season 1 episode that first aired in February of 1966.
Loading ...
Error!