Product Description Four-Cheese Alfredo sauce from the Francesco Rinaldi brand. I purchased a couple jars of this sauce this past weekend at one of our local grocery stores for $2.49 per jar and used it with a cheese ravioli dinner I made for my family that night. I have also seen this Alfredo sauce at other grocery stores in town for around the same price I paid this weekend. 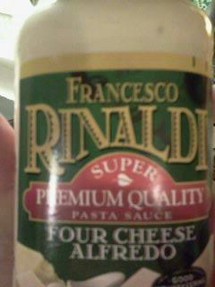 My decision to purchase Alfredo sauce was pretty much a spur-of-the-moment thing. My youngest daughter had been asking for ravioli for a few days and, since I was getting burned out on tomato sauce (and I knew my wife was), I figured a white sauce would be a nice change of pace, especially since it was cheese ravioli (my kids’ favorite).

I purchased this particular brand solely because of the price. I had gone a bit over budget with Christmas shopping last week and was trying to avoid spending too much on one meal. The fact this Alfredo sauce was about 40 cents less than the other brands (including some that were on sale) made the decision to purchase it much easier. And, since I have had tomato pasta sauce from this brand and thought it was OK, I was comfortable with the purchase.

As it turns out, this product was what I was expecting it to be. It wasn’t quite as good as some of the better known (and more expensive) brands that I could have chosen. However, it was still pretty decent. The sauce, while a little bland, did have an OK flavor to it and I could definitely tell it had multiple kinds of cheeses in it (though I couldn’t tell you which ones, mostly because I threw the jar right into the recycle bin). I also had no complaints when this was served at dinner, something that helped to justify my decision to purchase it.

Probably my only complaint about this product is the same one I have with most other sauces; there wasn’t enough in the jar. I had to buy two jars just to make it through one family dinner. As a result, I do think it would be nice to see larger jars available for purchase. Other than that, however, I had no complaints.

This is definitely a bargain brand and there is a slight drop off in overall quality when compared to some of the more expensive brands. However, it is still decent enough to justify the purchase, especially if you are saving money as a result.

I purchased this pasta earlier this week. Read to find out what I thought about it.
59%  1   9 StevenHelmer
Other Food & Cooking