My wife bought these for a Memorial Day barbecue. Read to find out what I thought of them.

Product Description: Frozen bratwurst patties from the Johnsonville brand made with bratwurst, bacon and cheddar cheese and prepared on the grill. My wife purchased a box of these for about $7.00 earlier last week at one of our local grocery stores and I used them as part of a Memorial Day barbecue we threw for my parents this past weekend. 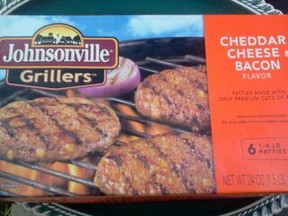 Growing up in a military family, I was raised to understand the meaning of Memorial Day and, as a parent, I do what I can to make sure my daughters understand the purpose of the holiday as well. As part of that, we do try to find a way to do something nice for a veteran on the holiday and, this year, chose to cater a barbecue for my parents since both of them are Vietnam veterans.

When I told my wife my idea, she immediately began shopping for some things to throw on the grill. This included Johnsonville Cheddar Cheese & Bacon Grillers.

I've had other varieties of the Johnsonville Grillers in the past but, up until this weekend, had not tried this particular one (or, at least I don't remember ever trying it). And, because of that, I wasn't really sure what to expect from it. As it turns out, it was a good purchase.

One thing I found I liked about these patties right away was how easy they were to separate. This might not seem like a huge deal. But, I've have plenty of other frozen patties in the past (hamburger and otherwise) that were a nightmare to break apart. In fact, most of the time, I end up having to thaw the patties out, something that makes it much harder to cook them on the grill. That wasn't the case with this product. The Johnsonville Grillers were easy to separate, making cooking them much easier.

As far as cooking goes, the patties exceeded my expectations. I figured, since they were made out of bratwurst meat, they would be very greasy and, because of that, was expecting a lot of flames. That, however, wasn't the case, they cooked relatively easily and, while there was some grease, I didn't have out-of-control flames like I expected to have.

Another thing that surprised me was the flavor. Both because of the bacon and the cheddar, I figured these would have a sharp/spicy taste to them or, at very least, would be a bit bolder than I'm used to. However, the cheese and bacon complemented the patty. They weren't overwhelming like I expected and I really did like these as a result.

I also apparently wasn't alone in that opinion. We only had one of these left when the barbecue was done and I'll have to fight my wife over the last one when we have leftovers for dinner tonight.

I admittedly wasn't really sure what to expect when my wife purchased these and I grilled them up this past weekend. But, after trying them, I have to admit I was very impressed. I would recommend giving these a try if you get an opportunity to do so.

StevenHelmer, Thank you for product lines, pretty pictures and practical information.
In particular, I like knowing about something that conveniences meals with more eaters and re-servings than anticipated. This product means that fresh bratwurst with fresh cheese and turkey bacon can be extended (hopefully imperceptibly) to accommodate everyone.

Would this bratwurst go well with Our Family brand grilling-style steak-house baked beans? 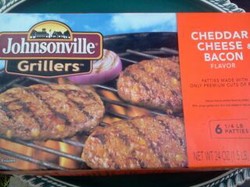 I purchased this pasta earlier this week. Read to find out what I thought about it.
75%  1   14 StevenHelmer
Other Food & Cooking