I purchased this product this past weekend. Read to find out what I thought of it.

Product Description: Deluxe pizza from the Horicon, WI-based Leroy meats containing sausage, pepperoni, mushrooms, onions, peppers and black olives and cooked at home. I purchased one of these pizzas at a grocery store this past Saturday and prepared it, using our pizza oven, Saturday evening to share with my wife.

My youngest daughter had two dance recitals this past Saturday and, during the two hours in between the performances, I ended up going to the grocery store across the street from the auditorium because my wife was starting to get hungry and wanted a salad.

While I was at the store, I passed the freezer section and saw they had pizzas from Leroy Meats. Since the company is relatively local (Horicon is about a 15 minute drive for me) and I had never tried their pizza, I decided to pick up one of the deluxe pizzas so we could make it on our pizza oven and have it for dinner later that night

I'm going to start out by saying, even though I found this pizza in the freezer section, I'm not convinced that is where it was supposed to be. The label said to keep the pizza refrigerated and, because of that, I suspect it was frozen in error. I'm only mentioning this because some of my overall opinion of this pizza might have been influenced by that.

There were a couple things I found I liked about this pizza. One of those reasons was the sausage. At first, I was a little concerned about the fact the sausage was raw, mostly because I was making this on my pizza oven and I wasn't sure if it would get fully cooked. However, it turned out much better than expected. It had a good flavor to it and, unlike pre-cooked sausage, ended up being more tender.

The pizza also had quite a bit of cheese on it. At first, I wasn't sure if this would be the case because, at least in the packaging, it didn't look like it had a lot. However, the quantity turned out to be more than satisfactory and, unlike many other pizzas I've purchased (for around the same $7.99 price), it was actually hanging from the slices after I cut this.

I thought the crust was just OK. It was the right thickness. But, there was something a little off about the texture. But, to be fair, this might have been one of the things affected by the pizza being frozen prior to my purchase rather than fresh/refrigerated.

Also fitting in this same category were the mushrooms. They were almost black in color and rubbery. My wife and I ended up picking them off the pizza as a result of that, which was kind of disappointing since we both love mushrooms.

It was an OK pizza. But, I really would like to try one of these from a refrigerated state rather than from the freezer to get a much-more-accurate opinion of them.

StevenHelmer, Did you see Katie Delong's article "Not Properly Inspected: Several Products Made by Leroy Meats in Horicon Recalled" for Fox6Now online May 15, 2017? The product line does not include the pizza. The recall is a bit of a surprise since the business is a 70-year-old family enterprise.

My wife purchased this product last week and we had it for breakfast the next... 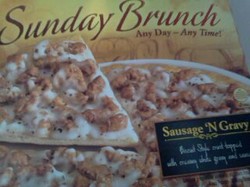 My wife purchased this product last week and we had it for breakfast the next morning. Read to find out what I thought of it.
Loading ...
Error!