I purchased these a couple weeks ago for our house. Read to find out why I won't buy them again.

Product Description: Drawstring, 13-gallon, tall kitchen garbage bags from the Our Family brand. I purchased a box of 40 of these bags for $6.65 at one of our local grocery stores a couple weeks ago and have been using them in our kitchen since that purchase. In total, I have used about 10 bags from this box.

I ran out of kitchen garbage bags a couple weeks ago and, since it was convenient, I decided to pick up a box of them while I was at one of our local grocery stores. I didn't want to spend too much on something that was just going to get thrown out, so I shopped for a brand that was affordable and, as often been the case in the past, the Our Family brand wound up fitting that description.

I have purchased plenty of other products from the Our Family brand and have been satisfied with most. And, for the most part, I have never noticed any real difference between garbage bag brands. However, after using these trash bags the past couple of weeks, I can honestly say I am seriously disappointed in the quality.

Let me start out by clarifying one thing. When I say I chose this brand of bags because it was affordable, I am not talking about a massive cost savings. I could have purchased a better-known brand for only about 50 cents more. In fact, this wasn't even the most affordable brand on the shelf. There were at least two brands that were cheaper. However, I decided on these garbage bags because I was familiar with the brand.

This is important because, as a result of what I just said, I honestly wasn't expecting a significant drop off in quality, especially since I've purchased other bargain brands in the past and have had no complaints. This, however, wasn't the case.

The first time I opened the box and took one of these bags out, I immediately began to wonder if I made a mistake. The bags just looked flimsy compared to the brands we normally buy (including the bargain brands I mentioned). This included both the thin plastic and the weak-looking draw strings on the bags. And, as I began using these, I was disappointed to learn my suspicions were accurate.

My kitchen garbage can is a little wider than most and, because of that, I have yet to find a garbage bag that fits it correctly.However, while most brands will be a bit snug on the can, I can still put them on it without any damage to the bag. I have yet to do that with this brand. Every time I put one of these on the can, the bag rips with very little effort.

This, in itself, is insignificant because, even with the small rip toward the top, the bags are still able to be used. However, as we quickly learned, the bags also cannot hold much weight. This is something that is important to me because, mostly because I don't like waste, I do try to fill a garbage bag to capacity. And, up until purchasing these bags, I was able to do so without the inconvenience/embarrassment of the bag ripping to the point the garbage ended up on the floor or driveway. Since purchasing these bags, this has happened twice, despite the fact I have not filled them nearly as full as I do most other brands.

In addition to the bags themselves ripping, the drawstrings on the bags were as flimsy as they appeared. I have yet to be able to use those drawstrings without them snapping, something that has not been anywhere near as much of a problem with other brands. This, of course, means I can't tie the bags shut as well as I would like them (especially since the plastic rips when I try to tie the bag itself) and creates the potential for a mess whenever I move the bag from the garbage can to our outside garbage bin. Needless to say, I grow more and more disappointed every time I use one of these.

I don't want to simply give up using these bags, mostly because I already paid for them, and, because of that, will likely use up the rest of the box. But, after trying these and seeing the low quality, I can honestly say this is a brand of garbage bags I will avoid purchasing in the future.

StevenHelmer, Thank you for product lines, pretty pictures and practical information.
It's so important to have attractive, sturdy bags for kitchen recycling and waste containers.

Would these bags work for collecting the leaf clippings that one doesn't want to leave in place or for raking leaves?

Our experience is also disappointing. The bag drawstring breaks when we stretch the bag over our 13 gallon kitchen waste bin. I find that it helps to gently stretch the drawstring around what will be its four sides on the waste basket. The waste bin is a tilt top type we got from Target about 10 years ago, and this is the first bag that has given us problems. I note there is "Satisfaction plus" printed on the 40 bag box. Here is what is says: "if you are not satisfied with any Our Family Brand product, simply return it to the store where purchased. We will refund your money PLUS replace the item with a like item of the brand of your choice - FREE."

A review of the Wal-Finate allergy pills that are available at Walgreen's for...

This is our favorite air purifier. Read to find out why we use it in our house. 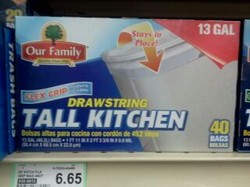 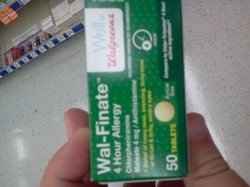 A review of the Wal-Finate allergy pills that are available at Walgreen's for a little less than $8.
23%  1   3 StevenHelmer
Family & General Health 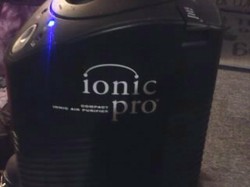 This is our favorite air purifier. Read to find out why we use it in our house.
Loading ...
Error!