My wife and I came across this product while shopping at Costco a couple weeks ago. Was it worth our money?

Product Description: Pre-made frozen sandwiches consisting of a chicken patty and cheese in flat bread. The sandwiches come individually wrapped and are cooked in your microwave oven for about 90 seconds. My wife and I purchased this product at Costco a couple weeks ago to take with us to work as a lunch option.

We made a family trip to Costco a couple weeks ago in an effort to stock up for the new school year. This included shopping for lunch items for my wife, who was returning to school as a substitute teacher's assistant.

When we first saw this item in the freezer section, I wasn't really sure what to think of it. However, she seemed interested in giving them a try and, since they were on sale, I put them in the cart. I then promptly forgot about them until re-discovering them in our freezer a couple days ago and, since she hadn't eaten the whole box yet, decided to give them a try.

One of the first things I noticed about these sandwiches is they were much smaller than the picture on the box led me to believe. In fact, I gave consideration to taking two of them with me to work before deciding to also bring along some cherry tomatoes, just in case.

However, as it turns out, despite the smaller size, these sandwiches were surprisingly filling. I had just the one sandwich and didn't feel the need to eat the cherry tomatoes until about three hours later.

As far as flavor goes, I had no complaints. The chicken was obviously a pre-processed patty and there was the usual drop-off in quality as a result of that. But, I thought it and the cheese had a good taste and was reasonably happy as a result.

I was, however, not as impressed by the flat bread in this sandwich. I was very careful not to overcook the sandwich but, despite that, the flat bread came out kind of chewy and I ultimately wound up throwing half of it out as a result. It actually made me wonder if maybe the sandwich would out better if I made it in the toaster oven instead. At least then, in theory, the flat bread would be crisp rather than chewy.

I wasn't crazy about the bread. But, overall, I did think these sandwiches were worth the money we spent on them, especially since they are something that can be made easily and quickly when we are at work.

StevenHelmer, Thank you for pictures, practicalities and products.
Have you and your family found out whether a toaster oven produces crisp instead of (revolting!) chewy bread? 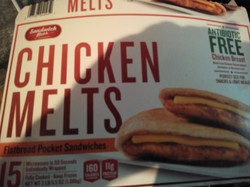 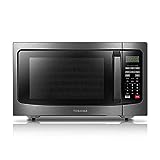 I purchased a package of this soup mix to have with dinner last night. Read to find out why I don't recommend it.
47%  1   6 StevenHelmer
Other Food & Cooking

My wife and I purchased a box of these a couple weeks ago and ate them last night. Read to find out what I thought of them.
Loading ...
Error!