Review of Stouffer's Spaghetti With Meatballs

I ended up having this for dinner last night. Read to find out why I wasn't impressed.

Product Description: Frozen single-serve spaghetti with meatballs dinner from the Stouffer's brand, prepared either in the oven or microwave. I purchased this product at one of our local grocery stores this past weekend for $2.50 and ended up preparing it in our microwave and having it for dinner last night.

My oldest daughter had a chorus concert last night and, as a result of that, I didn't get an opportunity to have dinner until late. Since it was so late and everyone else in the house had already had an opportunity to eat, I ended up settling for a frozen dinner. And, after some consideration, I picked out a Stouffer's Spaghetti With Meatballs dinner.

I purchased this product while grocery shopping this past weekend because it (along with some other frozen dinner varieties) was on sale for $2.50 and I figured, with it being a somewhat busy week, I would end up needing something like this. While the dinner did prove to be filling last night, my overall opinion of it was mixed.

I will start out by saying that, in addition to the dinner being filling, I did appreciate the fact it was easy to make. All I had to do was put it in my microwave for roughly 6 minutes and it was done. Considering it was late and I was getting tired, convenience was important.

However, when it came to taste, this product just seemed to lack something. Part of the reason for this, I think, was the pasta was somewhat dry. There was sauce and it had a decent enough flavor. But, there just wasn't enough of it and, because of that, the overall dinner was kind of bland.

This included the meatballs which, compared to other, similar dinners, was a bit of a surprise. Normally, I can purchase something like this and the meatballs would be the bright spot. In this case, they were as bland as everything else.

As a result of this, the only way I could eat this product was by covering it with a ton of Parmesan cheese. And, even then, it proved to be somewhat disappointing.

I liked the price and, as I said, this was convenient and filling. But, this dinner did definitely lack something in the flavor department and, even if it were on sale again, I would hesitate to buy this again.

StevenHelmer, Thank you for practical information, pretty pictures and product lines.
In particular, I appreciate finding out about bagged, boxed, canned, frozen, jarred products that help me when I need to extend -- because of drop-ins and "Tastes like more!" re-serving requests -- what I prepare fresh. This doesn't sound like one of those extenders to have in mind or keep on hand.

Would it have helped to have added sauce if you had had any on hand, or was the damage sealed into the product? 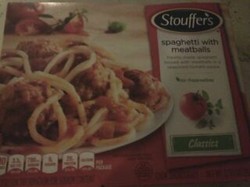 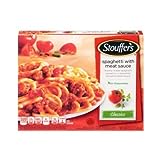 I got this as a Christmas gift. Read to find out what I thought of this product.
75%  1   14 StevenHelmer
Other Food & Cooking