I purchased this yesterday and made it for dinner. Read to find out what I thought of it.

Product Description: Boxed classic lasagna dinner kit prepared by combining the ingredients in the box with one pound of browned hamburger and water. I purchased a box of this yesterday afternoon at one of our local grocery stores for about $3 and prepared it on the stove last night as our Sunday-night dinner.

My daughters had a figure skating competition on Saturday and, after spending all day at the rink then a couple more hours outside in the cold watching a Christmas parade, I was surprisingly exhausted on Sunday. As a result, when I went to the grocery store to pick up something for dinner, I decided to keep things simple and, since it was on sale, picked up a Velveeta Classic Lasagna Skillet Meal Kit.

This is a product I've considered purchasing in the past, mostly because I like Velveeta Cheese and was intrigued by a meal kit that used a packet of that rather than cheese made from a powder. However, in the past at least, I have pretty much passed on the higher-priced kit and settled for a Hamburger Helper kit instead.

This product happened to be on sale yesterday afternoon, however. And, because of that, I ended up purchasing it. This proved to be a good decision.

One thing I liked about this product right away was it was easy to make. I didn't take the time to read the instructions when I purchased it and, because of that, was a bit concerned it would be more complicated than the Hamburger Helper we normally buy. However, it was as easy to make as the other brand, something I definitely appreciated since, as I said, I was pretty worn out yesterday (I almost caused a fire by turning on the wrong burner).

When I was preparing this meal, I thought it smelled a bit spicy. This was something my wife also commented on. As a result of that, I was a little concerned it would taste the same (this normally doesn't bother me too much, but I wasn't really in the mood for spicy food last night). However, when we tried the product, that wasn't the case. It had a bold blend of seasonings in it. But, it wasn't anything that I would consider too much and, while it did have a little kick (especially after it sat for a little while), the lasagna wasn't anywhere near as spicy as I thought it would be.

What I really liked about this product, however, was the cheese. As I said, this came with a packet of Velveeta cheese sauce and, when it was mixed in with the rest of the ingredients, it definitely set this apart from the skillet lasagna I've had from Hamburger Helper and some other, similar brands. Being from Wisconsin, I truly believe cheese makes most things better. And, it definitely did in this case.

This is, as I mentioned, more expensive than many of the other boxed skillet dinners on the shelf. However, after trying it, I do believe it is worth the extra money and I would recommend it as a result of that.

StevenHelmer, Thank you for practical information, pretty pictures and product lines.
In particular, I appreciate being able to have on hand and keep in mind quality ways to extend what I prepare fresh when the latter does not meet what I initially anticipated in terms of guest and re-serving numbers. Me too, I find Velveeta furnishing the cheese as is instead of in powdered form quite the deal-breaker.

What were the seasonings? 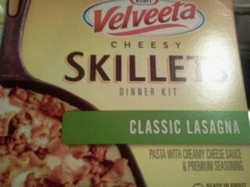 This product is something my wife and I will purchase when looking for a dinner for two. Read to find out why.
38%  1   5 StevenHelmer
Other Food & Cooking