This page is details for fans of Riddle-Master. If you want a book review to decide whether to read it or not, see here:

Timeline for the Riddlemaster Trilogy

Little hints are dropped here and there and sometimes it's hard to recollect them at the right time. These may be spoilers, so you have been warned!

2000 Years Ago
* Rhu, 4th Morgol of Herun, dies attempting to answer a riddle about the Star-Bearer

1000 Years Ago
* Yrth makes the three-starred harp, 100 years before Lungold is founded
* Ghisteslwchlohm founds Lungold and gathers the wizards there
* birth of Deth (he was called by an unknown name at that time)

700 Years Ago
* Lungold is destroyed; wizards dead or disappeared

600 Years Ago
* death of Tirunedeth, Morgol Cron's harpist
* Deth borrows Tinrunedeth's name and enters the service of the High One as his harpist

The Complete Riddle-Master Trilogy by Patricia A. McKillip in one volume.

The Six Kingdoms of the High One

The High One sustains the land-law of the six kingdoms.

ERLENSTAR MOUNTAIN: In the far northwest, the home of the High One lies on the edge of the Northern Wastes.

ISIG MOUNTAIN: The realm of Danan of Isig lies in the mountain range just east of Erlenstar Mountain. Kyrth is Isig's trade city on the Ose River.

OSTERLAND: Bordered by the Northern Wastes, the Winter and Ose Rivers to the south, Isig Mountain to the west, and the sea to the east. Kraal is a port city at the mouth of the Winter River. Har rules from Yrye near Grim Mountain.

HERUN: The upper middle kingdom. The Morgol of Herun rules from the City of Circles. Hlurle is the port city.

YMRIS: The lower middle kingdom, made up of the realms of Marcher, Umber, Ruhn, Meremont (where the Wind Plains lie), and Tor. The Kings of Ymris govern the High Lords of each realm from Caerweddin, the port city.

LUNGOLD: The city of wizards, from which the wizards disappeared 700 years earlier. Lies to the west of Ymris, and far south of Erlenstar Mountain, from which it is separated by vast stretches of uninhabited heavy forestland.

HED: Furthest east of the High One's kingdoms. Lies offshore between Ymris and Hel, and across the bay from Caithnard and the beginning of the old Trader's Road to Lungold. Tol is the port city, near Akren, the hall of the Princes of Hed.

CAITHNARD: A trade city at the beginning of the Trader's Road, between Ymris and Hel. The College of Riddle-Masters is here.

HEL, AUM, and AN: The three portions of An, previously separate kingdoms in the southernmost reaches. Anuin in An is the port city from which the Kings of An rule. Bordered by sea to the west and south, and forest to the north and east.

This is the main characters, not everyone in the book. The three-in-one volume of Riddle-Master has a comprehensive list.

Morgon, Prince and Land-Ruler of Hed: riddle-master; reluctant Star-Bearer; inheritor of a harp with three stars and a sword with three stars, made by the wizard Yrth for him a thousand years before he was born
Eliard: Morgon's younger brother and land-heir of Hed
Tristan: Morgon's young sister who sets out to find Morgon when he goes missing

Mathom, King and Land-Ruler of An: rules the Three Portions of An; descended from the witch Madir and shape-changer Ilon; has prophetic visions
Duac: son of Mathom and land-heir of An
Rood: son of Mathom; Morgon's best friend and fellow Caithnard student
Raederle: daughter of Mathom; promised since birth to the man who won the riddle-game with the wraith of Peven of Aum

El, Morgol and Land-Ruler of Herun: full name Elrhiarhodan; has vision to see through things and at long distances; beloved of Deth
Lyra: full name Lyraluthuin, daughter of El and land-heir of Herun; trained warrior in the Morgol's guard; sets out to find and protect Morgon when he goes missing

Har the Wolf-King and Land-Ruler of Osterland: has lived for more than a thousand years; riddle-master; friend of the wizard Suth who helped him learn to take animal shapes

Danan, King and Land-Ruler of Isig: has lived for more than a thousand years; can take the shape of trees; friend of Yrth who made the starred harp and sword in Isig

Yrth: second-most powerful wizard, the Harpist of Lungold; made the Star-Bearer's sword and harp before Lungold was founded

Aloil: wizard in service to Ymris; wrote poetry to Nun

Nun: wizardess in service to Hel; had a speaking pig named Hegdis-Noon

Iff of the Unpronounceable Name: wizard in service to Herun

Suth: wizard in service to Osterland; learned shape-changing with Har

Talies: wizard who sought service in Hed but declared it too uninteresting to serve

Ohm: Riddle-Master who helped Morgon search for an answer to the riddle of the stars on his face

The wisdom of the High One's realm is taught in riddles at the College of Riddle-Masters in Caithnard. Each riddle is to have an answer and a stricture, or moral, to teach the student. They are often not so much riddles as questions to which the Riddle-Masters seek answers. The answered riddles become a catechism to pass on history, learning, and wisdom.

What nameless thing pursued Kern of Hed? (This is the only riddle to come out of Hed.)
Kern was pursued one day by a Thing without a name. The Thing called his name over and over. He ran from it, going into his house of seven rooms and seven doors, and locking each door behind him until he came to the inmost chamber, where he could run no further. And he heard the sound of one door after another being torn open, and his name called each time. He counted six doors opened, his name called six times. Then, outside the seventh door, his name was called again; but the Thing did not touch the door. He waited in despair for it to enter, but it did not. Then he grew impatient, longing for it to enter, but it did not. Finally he reached out, opened the door himself. The Thing was gone. And he was left to wonder, all the days of his life, what it was that had called out to him.
Stricture: Answer the unanswered riddle.

Who was Ilon of Yrye?
Ilon was a harpist at the court of Har of Osterland, who offended Har with a song so terribly that he fled from har out of fear of death. He went alone to the mountains, taking nothing but his harp, and lived quietly. So great was his harping in his loneliness, that it became his voice. Word of it spread until it came one day to the Wolf of Osterland, Har, as he prowled in that shape through his land. He was drawn by curiosity to the far reaches of his kingdom, and there he found Ilon, playing at the edge of the world. Ilon, finishing his song, found the terror he had run from standing on his threshhold.
Stricture: The man running from death must first run from himself.

What are the seven circles of Herun and who built them?
Rhu, the fourth Morgol, structured the city, planning a circle for each of eight riddles his curiosity set to him and he answered. His journey to answer the eighth riddle killed him.

Who was Ingris of Osterland and why did he die?
Ingris angered Har, the King of Osterland, when he appeared as an old man at Ingris's door, and Ingris refused to take him in. So the wolf-king put this curse on him: that if the next stranger who came to Ingris's house did not give his name, then Ingris would die. And the first stranger who came after Har left was a certain harpist. The harpist gave Ingris everything he asked for: songs, tales, the loan of his harp, the history of his travellings - everything but the name Ingris wanted to hear, though Ingris demanded it in despair. But the harpist coudl give him only one word, each time Ingris asked for his name, and that word, as Ingris heard it, was Death. So in fear of Har, and in despair of his curse, he felt his heart stop and he died.
Stricture: Give what others require of you for their lives. [The harpist was Deth.]

Who was Sol of Isig and why did he die?
Sol was the son of Danan Isig. He was pursued through the mines of Isig Mountain one day by traders who wanted to steal from him a priceless jewel. He came to the stone door at the bottom of Isig, beyond which lay dread and sorrow older even than Isig. He could not bring himself to open the door, which no man had ever opened, for fear of what might lie in the darkness beyond it. So his enemies found him in his indecision, and there he died.
Stricture: Turn forward into the unknown, rather than backward toward death.

Who was Re of Aum?
Re of Aum offended the Lord of Hel once and became so frightened that he had a great wall built around his house in fear of revenge. He hired a stranger to build it, who promised him a wall no man could destroy or climb, either by force or wizardry. The wall was built; the stranger took his pay; and Re at last felt secure. One day, when he decided that the Lord of Hel had reazlized the futility of revenge, he decided to venture out of his lands. And then he travelled around his wall three times but found no gate to let him out. And slowly he realized that the Lord of Hel himself had built that wall.
Stricture: Never let a stranger build walls around you.

The Riddles of the Star-Bearer

Five riddles regarding three stars were hidden until Morgon went looking for them.

Who is the Star-Bearer, and what will he loose that is bound?
This was the unanswered eighth riddle of Rhu the Morgol of Herun.

Who will come in the time's ending and what will he bring?

Who will sound the earth's harp, silent since the Beginning?

Read the Review of the McKillip's Riddle-Master Trilogy!

Riddle-Master of Hed, Heir of Sea and Fire, and Harpist in the Wind

Riddle-Master Tropes
A light-hearted review of the tropes (standard literary devices) used in the Riddlemaster trilogy.

Too bad Patricia McKillip does not write a second trilogy as a sequel. Unless someone knows of something I do not, a riddle perhaps ;-)

I have often wished for a resource like this when I am reading a new series!

This story sounds so interesting! 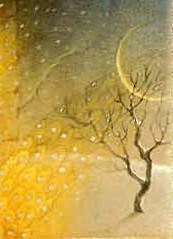