Best-selling strategy games, Risk remains popular with its fans, more than 50 years since the original version

Risk is a popular board game, and it’s just as challenging as ever. Winning this game relies on strategy. As a player, you get to channel your roll of the dice or choice of a card, into a decision. And if you choose well, your next move will help you conquer and win the game.

Playing Risk is a learning platform for young players, and a mental sharpening tool for older folks.

Since this board game was created in the 1950s, it has had lots of loyal fans, including the ones at our house. The roots of Risk grow out of war and military planing, our world history of powerful forces that try to dominate large territories, even the entire world.

Length of a game - it takes a while in the classic versions. Some of the newer versions are designed to go faster.

We played on school vacations, winter and summer. Success is based on strategy and taking risk, a useful life skill that has applications other than battle.

How much risk to take, under what circumstances, and how often? These are often delicate questions to balance.

We enjoy the vintage revival version of Risk, one of the editions shown below. Just about any theme that involves major conflict can be used as a canvas for Risk, including Lord of the Rings and Star Wars.

The players get to take over territories and occupy them via a board game, where the pieces go back into the box at the end, and the real world outside remains intact.

Released in 2005, also called the bookcase edition, which makes it easy to keep your copy ready to play 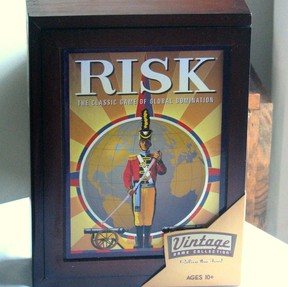 This 40th Anniversary edition is one of the newer versions of Risk, and it uses the pre-2003, “old” rules. The board is more like the classic Risk No. 44 than some of the specialized editions, including the colors of the territories.

The board is large enough to feel spacious, though it has more folds. And it comes with the classic wooden army pieces.

If you run out of armies or dice, it’s easy to mix and match pieces from these games and use the board and rules you like best.

When your strategy is take-over, the more forces the better. You will want to roll all the dice, especially if you’re playing in teams.

A big and bold edition of this board game

Many Risk fans consider this the best of all the editions, though there are plenty of reasons to like the others, too. This one has a wonderfully big board, and gobs of plastic army pieces.

You’ll have to find this one in secondary marketplaces, unless Hasbro/Parker Brothers decides to reissue it. Look on the box if you’re not sure. This one is marked “No. 44” and copyright in the 1975-1980 range.

Our box is beat up, and some of the army pieces are missing (maybe the dog got them, or they ended up in the cold air return). But the board is large (just over 22x20 inches), and playing this version brings back those long afternoons, plotting strategies and rolling the dice.

Find This Edition on eBay

A Big Board for Global Game Play

Play a version other worlds and movie favorites

Two of the best alternative Risk games are Star Wars and Lord of the Rings. Both these stories are about epic struggles between good and evil.

If the dark side wins, they threaten to plunge the known worlds into darkness and chaos.

A perfect canvas for Risk.

Is The Game of Risk For You?

I don't really know about length of play for others. I'm sure this game can go for a very long time, depending on the skill and determination of the players, and the luck of the draw. If it was short, someone would probably get frustrated about playing with the other person who crushed them so fast.

kimbesa, Are any records being kept as to longest or shortest playing time for Risk?

We have several versions, and I know others who collect more, as well as play their favorites.

This would make a great present and it's timeless as well.

Yes, they can have all the excitement without the potential for carpal tunnel.

I think this is a good alternative to the video games. Sticking to the PC for hours is no good. It is harmful to the spinal cord and the eyes. Risk board game looks very exciting especially for gamers who do not have the restriction of time.

It will keep the players going for hours, especially if they love challenging board games. Still popular after all these years...it feeds the competitive spirit.

I've never heard of Risk, but it definitely sounds like a fun way to spend some quality time with friends or family members.

Love to hear about new Risk fans coming along. LOL...they won't let you play because you beat them. So cool! Thanks for stopping by!

I still have my old Risk game (circa 1980) and have played it to pieces. We recently upgraded for my son... he and his friends play marathon Risk games (I'm not allowed to play, having beaten them a few times too often).