A backyard nature adventures. Watching a Robin s nest. We watched the nest being built and the parent Robins hatching their young. Beautiful Pictures!

A Show of Nature - A Robin s nest

A large silver maple became home to a family

It was one of those special and somewhat rare occasions when my husband and I were treated to a show of nature. It was beautiful and entertaining for several days. It was hard to see because it was so high up in our silver maple tree but a beautiful pair of robins built a robin s nest and then gifted us with some beautiful baby robins.

Our back deck is right at the edge of this huge tree and we had in fact just trimmed it up a couple weeks ago. And it seemed late for a robin s nest. But there you have it. Nature does what it is going to do. It is always right. Our job was just to watch the story unfold.

So it occurred to me since the nest was so high, the only way I would get a look is through my camera. The rest as they say... is my wizzley page.

We assume they are eggs, no little mouths popping up yet

Would a Robin s nest be entertainment for you?

Close up of Robin s nest

Boy, look at the intricate work

Preparing for the Safety of the Robin s nest

There is a lot to do to prepare for a family

The mama and daddy Robin worked as a team. One or the other was always around the nest. They built the nest together and they watched over it as a team. It was wonderful watching them, they were so industrious and worked tirelessly. When they had the nest perfect and to their satisfaction, they started training the other animals in our backyard.

Absolutely NO ONE was allowed in that tree or even around it. We have all kinds of animals in our backyard. And lots and lots of birds, not to mention squirrels. Actually we were worried because we do have so many squirrels, but we didn’t have anything to worry about. They had everything under control.

Every time any animal was even near the tree, not even in it, one or the other or both of the parent Robins would appear. Sometimes it seemed like from out of nowhere. They would in no uncertain terms teach these invading animals some respect. It didn’t take any time at all. Within a few days, we went from having many animals in the yard, to virtually none.

Interestingly enough things sort of settled down after they laid the eggs. Birds would come into the yard but they did NOT go into that tree. But no squirrels have come around since they learned their lesson.

They now had their privacy and were free to go about the business of raising a family.

Mama Sitting on the Nest

She and Daddy were dilegent with their duties

No One was allowed in that tree

A Baby Robin of Your Own

They always worked in teams to get the babies fed

An Education and a Lesson in Parenting.

Maybe humans could learn from the Robins

It was amazing to watch the feeding of these precious babies. The Robin Parents were so proficient and so dedicated. It has been so hot and humid here, I can barely breath when I am outside, yet these birds worked tirelessly to watch, protect and feed these babies.

This has actually been an education as well as lesson in parenting. I think we humans could learn a thing or two from these wonderful parents of nature.

We enjoyed our backyard nursery and watching the success of these Robins in their robin s nest.

A Pair of Robins tending the nest

I wish I could have gotten close enough for this. But this is wonerful

They were very equal partners

Maybe you know it by birdwatching

Birdwatching or birding is the observation of birds as a recreational activity. It can be done with the naked eye, through a visual enhancement device like binoculars and telescopes, or by listening for bird sounds. Birding often ...

Are You a Birder?

Do you take the time to watch and learn about the birds in your backyard?

Oh yes! It provides hours of entertainment and I love learning about them

This was a beautiful article and the balance of picture and text was really good. I do get robins on my allotment, and I think that they nest in the trees on the road outside. What I would say is that if you want to help them feed, make sure that you do some gardening. Whenever I dig my ground, the robin turns up to peck for insects.

Love love love watching the birds and feel so privileged when ever they build a nest in our garden.

A couple of years we had bluebirds in a birdhouse. We loved it and would use the long evening to spend a few minutes watching them.

I love the birds. When i was a teenager I was for some time considering to become an ornithologist. I had canaries for years and still stop no matter how late I am for something to admire a cute bird.

We are lucky that every year we get at least one pair of birds nesting in our garden, either robins, blue tits or blackbirds. This year we had to abandon our patio for a few weeks because the blackbirds nested there and we did not want to disturb them.

I'm not really a birder, but I do like watching them when they are nearby in the yard. I have gone on a couple of birder hikes and have learned a great deal from the "pros".

wonderful article!! even better to see the birds!! I thought mockingbirds were territorial but no! Robins have them beat!

Absolutely, I feed them right outside my kitchen window and love watching. For a couple of days we've had a blue jay that is young but seemed like it couldn't fly. It doesn't run when I bring out seeds. Today I put water and seeds on the ground for it, but also chased it a bit to see if it could fly...it managed to get up into a very low branch, then up to another. Hopefully if there is an injury it is healing.

yes I love birdwatching, it's very peaceful to observe nature go by

The Beauty of Birding

Close Up of Baby Robin

From the Start a Wonder About Birds

I can't remember a time I didn't love birds

I have always been interested in birds. It started when I was a young child and a young hawk was injured in our back yard and it turns out it had a broken wing. My Dad and I nursed it back to health.

Today, I own a black capped caique parrot. This is a huge commitment of love and one I do not recommend unless you do your homework and learn all there is to know BEFORE you make your decision.

And bird watching has been a hobby for a long time. I set up a "bird bed" in my backyard at one time. Lots of feeders, and watering and platforms. It was so beautiful and so wonderful to sit on the deck and watch the varieties that arrived. And of course try to entice new species to come visit. I highly recommend this past time.

All Animals Are My Passion

Here are some of my other animal lenses

The Amazing Story of Isabel

The Love for Animals

The Joy and Sorrow of Feral Cats

Do you enjoy Birding? Have you ever watched a Robin s nest?

I love birds, birding, feeding birds and watching birds nest and hoping for a safe healthy out come.

Love your page on the robins nest. I have never seen a robins nest but have seen other birds nest which is beautiful to watch

No, but I know a lot about breeding canaries. For some time we had them more than forty in an apartment. My, there was a lot of noise when they started to sing....

A bird nested inside my Direct TV hardware last year. Perfect with three sides of metal protection! She was able to hatch three birds--her nest is still there, I wonder if she will return.

Yes, robins nest regularly in our garden and there's always one to be found out there all year round. We often have an anxious few days when the babies fledge, because we have to keep an eye on our dog to make sure there's no tragedies.

thanks for sharing this special family.

I think birds are actually pretty bright little creatures. I had a love bird once, but I don't talk about him much, he met an early end (still makes me sad). We have lots of hummingbirds at our house. Enjoyed your story and photos.

I enjoyed this write up, and it's always interesting about robins, they seem to protext that nest area, we have two robins nests in one tree, and it seems that they divided ti evenly between the two nests-- no other birds and teh like allowed, even teh raccon was taught a lesson of respect.

I had a robin who decided to build a nest at the top of one of my drainpipes this year. I had my own bird's eye view of all the goings on. I've always been amazed by the huge size of robins over here LOL!

I have enjoyed watching your robins nest through pictures...by now I'm guessing the fledglings have left the nest and are grown up? I have never had the pleasure of watching a Robins nest, but did watch several birds gathering grasses, leaves, twigs to make nests up in the trees around us one spring day. They were blue jays, and several were doing the same thing at different trees on the same day...interesting. 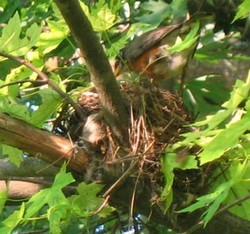 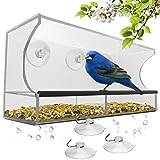