Life-changing decisions for four apparently unconnected people are weaved together in Run, a four-part drama due to be shown on consecutive nights on Channel Four starting on Monday 15 July 2013. Set in London, this is a gritty look at modern life in Britain. The four people are Carol (played by Olivia Colman), Ying (Katie Leung), Richard (Lennie James) and Kasia (Katharina Schüttler).

Single mother Carol is trying to keep her family together but her teenage sons have killed some one, giving her a dilemma of protecting her family versus doing the right thing. Illegal immigrant Ying is touting DVDs and stolen phones around the pubs and cafés of Brixton but she finds herself hunted by a gang she is in debt to and takes refuge at a barbershop.

Recovering heroin addict Richard wants to re-establish contact with his teenage daughter but is also under pressure to return to drug taking. And Polish cleaner Kasia is struggling to earn a living, especially given her boyfriend’s gambling addiction.

Olivia Colman was nominated for a Bafta in 2012 for playing Sally Owen in Twenty Twelve a year before she won a Bafta for the same role. And she added another Bafta for playing Sue Brown in Accused. She also has two British Independent Film Awards, for playing Elizabeth in Hyde Park on Hudson and Hannah in Tyrannosaur, a role that earned her multiple awards. Other parts have included Pam Bachelor in Look Around You, Harriet Schulenburg in Green Wing, Amanda in The Time of Your Life, Debbie Doonan in Beautiful People, Sophie Chapman in Peep Show, Nancy Ronstady in Exile, Alex Smallbone in Rev and DS Ellie Miller in Broadchurch.

Katie Leung is best known for playing Cho Chang in the Harry Potter films and her kiss with lead actor Daniel Radcliffe earned her an MTV Movie Award nomination. Her only other film and TV role was as Hsui Tai in the 2008 episode “Cat Among the Pigeons” of TV series Agatha Christie: Poirot.

“Ying allows herself to become almost invisible within society as she ploughs on through the streets selling her goods, determined to look ahead and eventually to be free of debt so she can support her family back in China,” said Katie Leung. “She possesses a kind of courage most of us could only dream of having, but she must ultimately choose between her own happiness and the jeopardy she may bring to her loved ones. Courage therefore becomes futile for her. Survival is key.”

Lennie James was nominated for a Bafta for playing Bonaface in the 2000 TV movie Storm Damage. His television career started in the early 1990s with roles such as Baptiste in The Orchid House and Cliff Morgan in Civvies. He played Detective Constable Bruce Hannaford in twelve episodes of Out of the Blue. Other parts include Lee Kingley in Buried, Robert Hawkins in Jericho, 147 in The Prisoner, Charlie in Hung, DCI Tony Gates in Line of Duty and Morgan Jones in The Walking Dead. He is due to feature as Joe Geddes in upcoming TV series Low Winter Sun.

Created and written by Marlon Smith and Daniel Fajemisin-Duncan, Run was directed by Charles Martin and Jonathan Pearson and produced by Chris Carey. It was the first commission for independent production company Acme Films, owned by executive producer Jaimie D’Cruz and Francesca Newby.

“Channel Four has a proud history of developing new drama talent both on and off screen and we are delighted to be continuing in that tradition with Run, a beautifully authored and original series about a strand of British life rarely seen on our screens” said Sophie Gardiner, Channel Four’s commissioning editor.

I didn't really enjoy this. I stuck it out till the end because the acting was good and I was expecting something to tie everything all together in a satisfying way. However, this is the UK and not Hollywood. While the last moment tied everything together, it was not very satisfying. 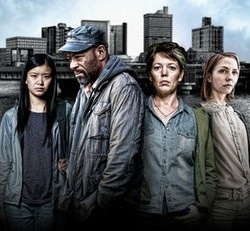