Safety evolves not only in our personal lives and experiences but in our societal structures. Our rules of the game as it were. Each rule is paid for in blood.

Let us consider our laws and regulations as rules of a game, or a sport. With each rule changing due to injuries and deaths. Let's have a conversation about how that reactive environment, while it can help prevent further death and injury, is not the best at preventing the deaths and injuries in the first place.

Sherlock Holmes in a pea-souper.

Sherlock Holmes striding the streets of London, the mysterious fogs of the city swirling about him as he stalks killers in the cold night.

The "Great Smog" of December 1952 killed some 4000 Londoners nigh on immediately and another 8000 over the ensuing weeks.

Which was preceded by the;

Which basically means smog was killing Londoners for 100 years.

Those that died paved the way for legislative changes and to an ongoing improvement in the discussion and control of these issues.  In London.

Safety is always seen as a cost.

If Safety works it's seen as unmeasureable, and how do you manage what you cannot measure?

We put up traffic lights when someone dies at an intersection.

We wring our hands when a 1000 people in Bangladesh die because we like to buy cheap clothing as long as we don't see the workers who make the clothing.  They are in the fog of distance in a foreign country.

Bangladesh is going through the same ructions now as London did in 1952.

The Govt. of London did not want to change the laws on clean air, because of money. Backbenchers had to get the ball rolling.

In Bangladesh the same seems to be happening.  Here is an article on how the people of Bangladesh are organising themselves.

This organisation will lead to less dehumanization of these people.

It shows how blind some people can be that even when they breathe the same polluted air that is killing people, they still value money highly.  That even when a building collapses into a mass grave in their city that there still has to be debate over whether that is a good or bad thing.

If you work in Safety areas, you will replay these issues.   So prepare to argue how Safety now is better than gambling on paying lawyers later.

How to cost Safety.

Safety is more difficult to cost than the cost of buying everyone safety helmets, or other suggested Safety changes.

There is always pressure to produce what is seen as the moneymaking part of the process.

Don't worry about the spot-welder not working properly, keep pumping the mufflers out.

The mufflers on the production line are in the immediate vision of workers and supervision.   They don't see the costs of mufflers being returned, but they do know the cost of failing a production target.

Costs need to be visible.

Customers up and down stream of the process need to be consulted so the interface can work better.

That's the first thing.  The second is keep a record of improvements that arise from Safety meetings.  A task that may involve some risk, such as taking steel samples, may be reduced because through research it's determined the sample isn't needed because the temperature and metallurgical profile never drastically changes at a particular point.

So the task disappears but also the cost of the sampling is a Safety saving.

That change would not have happened without the forward vision that real Safety work has.

So claim it.  Keep your eyes open for these opportunities and record them, because they are not usually.  And it will help.

Government and other agencies sometimes are sources of information for how Safety can save you money, use this information as well.  For example the costs to your industry type from an accident.

However, these are general figures, finding information from your own workplace is much more compelling.

Which are you? Pro or Retro?

Safety after the accident is retro.

Pro Safety is in the future.

It is dead easy to measure which you are.

How much time in the day do you spend on forward thinking?

All the rest is retroactive.

It's not just Safety that can suffer from this.  Management can get tied up with the everyday.  And fail to plan for the future on a whole range of issues.  Issues such as Succession Management for example.

Who do you talk to about Safety?

If you were a farmer would you know the best farming practices for getting sheep to water without them bogging, so you don't have to wade in and get injured yourself?

Farming stands out as a dangerous industry.  Not just because of the isolated and solo nature of the work, but because that isolation tends to limit sources of information.

So get Pro, get connected.  If there is no website for Safety in your industry, get one.

Safety Match
Why is a safety match called a safety match? Why should we not play with matches? Fire is the embodiment of the dual nature of Safety/Risk.

Safety is Danger
Safety has a boring reputation, when it's really a wild child of the imagination.
Updated: 09/27/2013, Fargy
Thank you! Would you like to post a comment now?
3 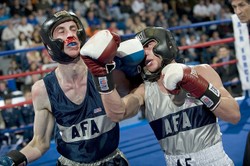 A medical emergency could happen at any moment. The question is whether you have the knowledge to save lives. We should all have that.
100%  11   22 DerdriuMarriner
Environmental Health

Nissan LEAF® has five-year leads as the top-selling electric car, partly due to maximum sound confidentiality inside and minimum noise pollution outside.
Loading ...
Error!